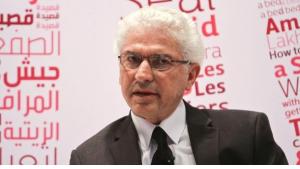 Syrian author Nihad Sirees has written seven novels and several plays and TV dramas. After increasing pressure from the Syrian government, Sirees left Aleppo in early 2012. Marcia Lynx Qualey met him at the Abu Dhabi Book Fair, just as he was leaving his exile in the US and moving to Egypt END_OF_DOCUMENT_TOKEN_TO_BE_REPLACED

Nihad Siris' Novel Ali Hassan's IntrigueHumour Harbours Its Own HorrorWriters in Syria: How Creativity Blossoms in a Rigid RegimeEssay by the Syrian Writer Fawwaz Haddad: Children of a Divided Nation

END_OF_DOCUMENT_TOKEN_TO_BE_REPLACED
Social media
and networks
Subscribe to our
newsletter