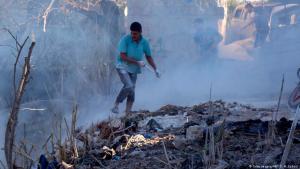 Tahrir al-Sham will not be subdued by the destruction of Idlib over the heads of its inhabitants, or by the sacrifice of millions of civilians. As Russia and Assad tighten the noose, we need to realise that the war on terror cannot be won by outdoing terrorists in the slaughter of civilians, argues Burhan Ghalioun, former SNC chairman END_OF_DOCUMENT_TOKEN_TO_BE_REPLACED 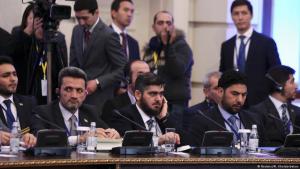 As the war in Syria rolls on and civilians continue to die, caught in the deadly crossfire of a multi-front conflict, the Syrian military and political opposition – bowing to intense international diplomatic pressure – has been dragged into political negotiations that lack the minimum conditions for success. Essay by Burhan Ghalioun, former chairman of the Syrian opposition Transitional National Council END_OF_DOCUMENT_TOKEN_TO_BE_REPLACED

U.S. missile strike in Syria: Trump turns the tableAssad and the rise of IS: My enemy's enemyAnother year of civil war in Syria: Nothing short of scandalous 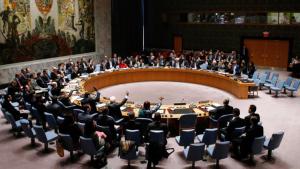 The illusion of a political solution

There is much discussion in the West about a political solution to the conflict in Syria. But the reality is that the world is looking the other way, continuing to nurture the illusion that something is being done at international level and that the Syrian people have not been abandoned. A critical contribution to the debate by Burhan Ghalioun END_OF_DOCUMENT_TOKEN_TO_BE_REPLACED

END_OF_DOCUMENT_TOKEN_TO_BE_REPLACED
Social media
and networks
Subscribe to our
newsletter