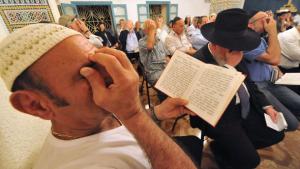 Before the founding of the state of Israel in 1948, about a quarter of a million Jews lived in Morocco. In the 1950s and 1960s, many emigrated to the new Jewish state, leaving a diminished Jewish community behind. Hind Al-Subai Al-Idrisi takes a closer look at interreligious dialogue in Morocco, a predominantly Muslim country that is now ruled by a moderate Islamist party END_OF_DOCUMENT_TOKEN_TO_BE_REPLACED

Interview with Abdelilah Benkirane: Islam Is Not a Static ReligionThe Writer Edmond Amran El Maleh: A Moroccan Jew with Arabo-Berber RootsInterview with Simon Levi: ''A Culture is Never Lost''

END_OF_DOCUMENT_TOKEN_TO_BE_REPLACED
Social media
and networks
Subscribe to our
newsletter