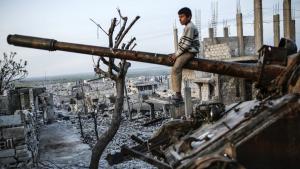 Rather than being concerned with the fate of the Syrian people, the Geneva peace talks mainly focus on the interests of the two superpowers Russia and the US, writes Islam scholar and sociologist Huda Zein END_OF_DOCUMENT_TOKEN_TO_BE_REPLACED

Interview with the journalist and author Garance le Caisne: Caesar and the butcher of DamascusThe Syrian uprising five years on: Alive and kickingSyria conflict: Feigning helplessness 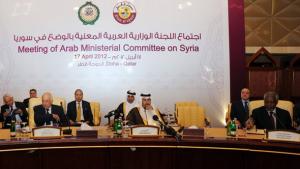 The Conflict in Syria

From Peaceful Uprising to a Proxy War

﻿According to the German-Syrian sociologist Huda Zein, the escalation in violence in Syria can be attributed primarily to the intervention of various parties in the conflict. It has developed into a proxy war sustained by its own dynamics. Only an international consensus can hope to put an end to the violence END_OF_DOCUMENT_TOKEN_TO_BE_REPLACED

Civil War in Syria: Only the Europeans Can Negotiate NowThe Opposition in Syria: The Least Common DenominatorInterview with Peter Harlin: The Religious Narrative of Syria's Armed Opposition

END_OF_DOCUMENT_TOKEN_TO_BE_REPLACED
Social media
and networks
Subscribe to our
newsletter