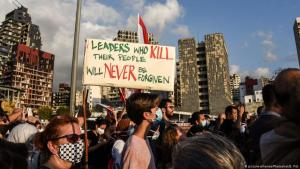 What now for Beirut, once the Paris of the Middle East?

The destruction of the port of Beirut – and Lebanon's free-falling economy – has fuelled calls to end the country's sectarian political system, which allocates power among Christians, Shia, and Sunni Muslims according to a rigid formula. But might such a change merely deepen suspicion among an already deeply divided population? by John Andrews END_OF_DOCUMENT_TOKEN_TO_BE_REPLACED

END_OF_DOCUMENT_TOKEN_TO_BE_REPLACED
Social media
and networks
Subscribe to our
newsletter