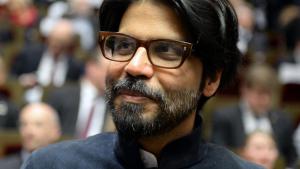 Societies around the world are in turmoil, with religious and social groups pitted against each other in many countries. Examples include the Arab Spring, social revolt against oppressive regimes, the rise of IS, the call from some in Europe for Islam to reform, and the emergence of right-wing movements such as Pegida. Julis Koch spoke to Indian author and essayist Pankaj Mishra about the root causes of this tension and lack of understanding END_OF_DOCUMENT_TOKEN_TO_BE_REPLACED

Interview with Maha El-Kaisy-Friemuth: "We urgently need reform within Islam"Islam and the modern age: Moving beyond dogmatic doctrineMuslims in liberal democracies: Why the West fears IslamStefan Weidner's book on Islam and the West: The end of imperialismQantara dossier: India

END_OF_DOCUMENT_TOKEN_TO_BE_REPLACED
Social media
and networks
Subscribe to our
newsletter