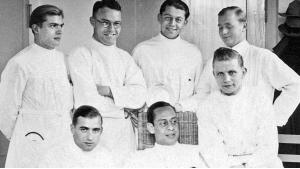 In "Der Muslim und die Judin" (The Muslim and the Jew), Ronen Steinke tracks down the story of the Egyptian doctor Mohammed Helmy, who saved the Jewish woman Anna Boros from deportation. The author recounts a daring rescue in the midst of Nazi Germany and examines the often ambivalent relations between Jews and Muslims. Ozan Zakariya Keskinkilic read the book END_OF_DOCUMENT_TOKEN_TO_BE_REPLACED

END_OF_DOCUMENT_TOKEN_TO_BE_REPLACED
Social media
and networks
Subscribe to our
newsletter