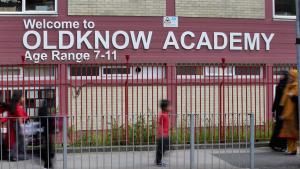 The Trojan Horse scandal in the UK

Claims that Islamists were trying to Islamise secular state schools in Birmingham rocked the British education system to the core earlier this year. Extremist views in the classroom are a sensitive topic at a time when Britain is concerned about its citizens' reported involvement in jihadist activities in Syria and Iraq. Was there really an Islamist conspiracy? Was the whole thing blown out of proportion? And if so, what will be the consequences? Opinions differ. By Qurratulain Zaman END_OF_DOCUMENT_TOKEN_TO_BE_REPLACED

The Trojan Horse scandal in the UK: Islamists in the classroom?Review of the Muslim Brotherhood in the UK: Has Cameron buckled to pressure from Middle East allies?Muslims in Liberal Democracies: Why the West Fears Islam

END_OF_DOCUMENT_TOKEN_TO_BE_REPLACED
Social media
and networks
Subscribe to our
newsletter