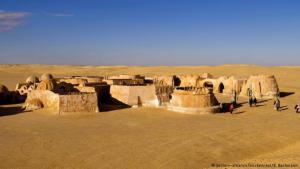 Reviving the Tunisian tourism industry: Calling on the force

Tunisia′s appeal as a holiday destination hit rock bottom a couple of years ago when it became the target of several Islamist attacks. Having rescued a number of Star Wars film sets in south-western Tunisia from sinking into the desert sands, a local tourism agency is now hoping to attract the film series′ considerable fan base. By Silke Wunsch END_OF_DOCUMENT_TOKEN_TO_BE_REPLACED

Hamza Meddeb on the "No Future" generation: Tunisia's ticking time bombNGO report on the Jasmine Revolution and security in Tunisia: How to make the transition from dictatorship to democracySocial unrest in the Arab world: Guilty of gross negligence

END_OF_DOCUMENT_TOKEN_TO_BE_REPLACED
Social media
and networks
Subscribe to our
newsletter