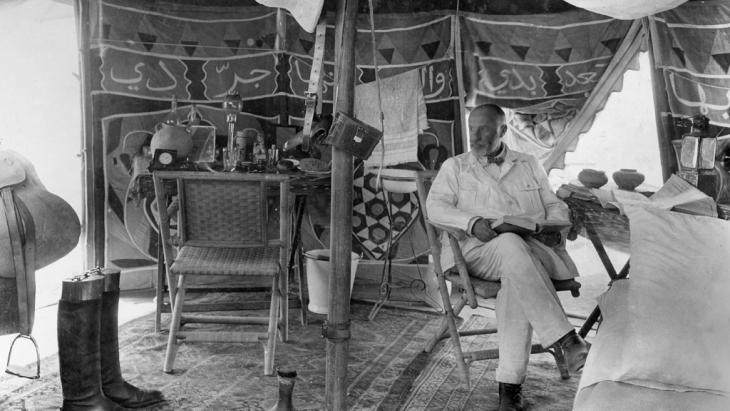 Enchanted by the Myth of the Orient

Max von Oppenheim was an astute observer of the Near East. He was also captivated by its history, culture and way of life. In fact, Oppenheim's entire adult life is an illustration of how difficult it is to reconcile the captivating dream of the Orient with the sober political reality of the region – a difficulty that remains to this day. By Kersten Knipp

In the days when Max von Oppenheim lived in Cairo, relics of past ages – carpets, wall hangings, old chests, vases and dishes – could be picked up quite easily in the bazaars of the Egyptian capital. Such charming works of art and craftsmanship, which were no longer used in the large cities of the Arab world at the close of the nineteenth century, were very popular with historians and explorers, who sought to answer the tantalising question as to what life must have been like in the Orient before the arrival of the Europeans; when life in Cairo, Beirut and Damascus moved to a completely different rhythm. At the end of the nineteenth century, it was very hard to imagine what things must have been like in that period.

In his book "From the Mediterranean to the Persian Gulf", the archaeologist Max von Oppenheim (1860–1946) wrote that although there was no European theatre in Beirut, one could find "numerous café chantants, where guests could listen to balladeers, French chansonettes and Bohemian ladies bands."

Although he felt that all of this was undoubtedly pleasant and a sign of progressive modernisation, he knew that it was simply another time, a period of transition leading into a new epoch, an era in which the old one would be lost.

"It goes without saying, of course, that there is no lack of Oriental coffee houses where Arab music is played." Yet, things were not as they once had been. At the time he wrote the above lines, Arab music had become merely one form of entertainment among many. The residents and guests of Beirut had a choice and could freely decide what they want to hear. This meant, however, that the days when only Arab music was performed, were gone forever.

In Damascus too, Max von Oppenheim remarked that the old Orient remained, at best, only a backdrop. He noted that he could visit mosques in the city without encountering any difficulties. "Only once was I prevented from visiting a mosque. It was the one in the Tekija belonging to the whirling dervishes who, in contrast to other places, have not yet tried to turn their religious practices into a profitable enterprise." 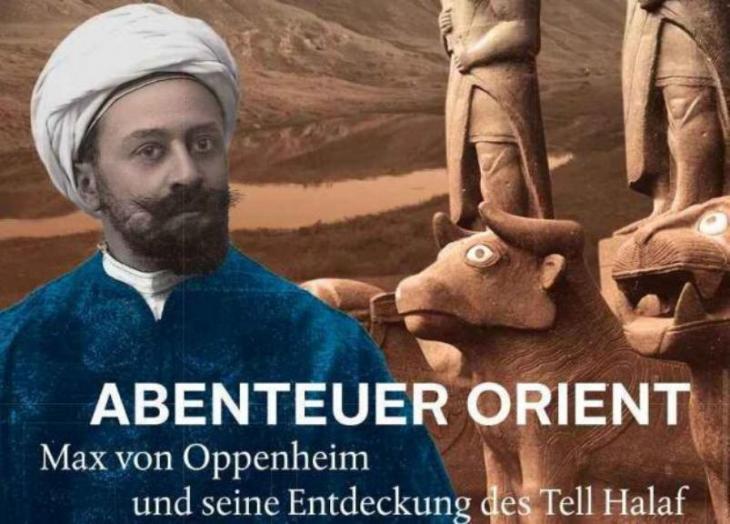 In 1899, Max von Oppenheim discovered the remains of the residence of an Aramaean ruler at Tell Halaf, on the border of modern-day Syria and Turkey. An exhibition of his archaeological finds and selected items from his private collection are on display at the Art and Exhibition Hall of the Federal Republic of Germany in Bonn from 30 April to 10 August 2014

European politics played out in the Near East

Max von Oppenheim was an astute observer of the Near East. His book "From the Mediterranean to the Persian Gulf" is full of insightful comments on the transformations that were underway in the Arab world at the time. Starting in 1896, as a member of the German Consulate General in Cairo, he filed literally hundreds of reports on the situation in Egypt, which was at the time under British rule, and reflected on how Germany could increase its influence in the land of the Nile.

In the autumn of 1914, World War I was underway and Germany was at war. Von Oppenheim was appointed head of the German Intelligence Bureau for the Orient. While in this post, he speculated on how Germany could put an end to – or, at the very least, minimise – the increasing dominance of its enemies, Britain and France, in the Near East. He summarised his reflections in his "Exposé Concerning the Revolutionising of the Islamic territories of our enemies".

This document reveals its author as an ardent nationalist, determined to put Germany's opponents in their place. "Our consuls in Turkey and India, our agents, etc., must incite the whole Mohammedan world to wild revolt against this hated, lying, unscrupulous nation of grocers. Should we have to haemorrhage, than England should at least lose India."

The aim was therefore "to stress the religious element, especially through the Al-Azhar Mosque, the brotherhoods, etc." Small-scale coups and terrorist attacks would also contribute to "making the British in Egypt more headless than they apparently already are."

As it happened, the plan failed. It was the British and the French, as opposed to the Germans, who managed to get the Arabs on their side. Nonetheless, Max von Oppenheim saw one thing very clearly: Muslims could indeed be politically mobilised; it was all a matter of using their religious sensibilities to one's own ends, in short, employing faith in the service of politics. 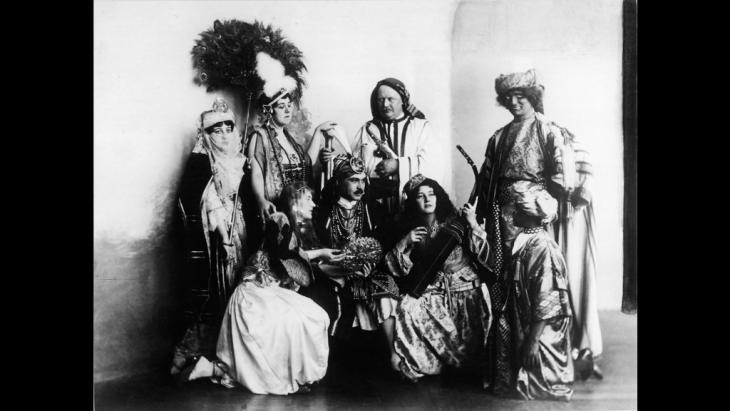 Playing Orient: for this tableau entitled "Sultan with Entourage", people from the West, probably members of Europe's upper classes, dressed up in costumes from Oppenheim's collection and posed for a photo

In private, however, Oppenheim was reluctant to accept the conclusions he himself reached in his role as a political strategist, namely that the Orient was experiencing major upheavals and that these changes would transform the face of the region forever.

The Sykes-Picot Agreement, in which Britain and France divided most of the Arab world between them, had not yet been signed. Nevertheless, Oppenheim knew the direction the Arab world would take as a result of the First World War and its aftermath.

In his strategic papers he wrote, "The expected reprisals will – the more brutally they are implemented and, as is likely to be the case, the more they affect the innocent – only serve to increase the fury and fanaticism of the people." His words read like a passage from a contemporary handbook on fomenting Jihad, the perversion of religion that is so typical of the late twentieth and early twenty-first centuries. Yet, these are Oppenheim's own recommendations, devised to oust the British and French from the Near East.

This cynical game contrasted sharply with Oppenheim's private life, which was immersed in a completely different world, that of the traditional Orient. His passion for this world was evident in his tireless, decades-long archaeological work and his passion for collecting, which was fed by endless forays though bazaars, where he amassed everything and anything preserved from the old, mythical Orient.

He fastidiously assembled his relics in his Cairo villa, where he held a fanciful costume ball twice a year. These social occasions were popular with the upper echelons of European society, who, upon entering Oppenheim's villa, swapped their regular clothing for costumes supplied by their host, transforming themselves into sultans, ladies of the harem, emirs and eunuchs. Guests included Princess Pauline of Thurn and Taxis, Count Johannes Nepomuk of Praschma and Prince Karl Egon of Fürstenberg, to name but a few of the devotees of Oppenheim's costume balls. Even the popular German writer Karl May was among his guests. 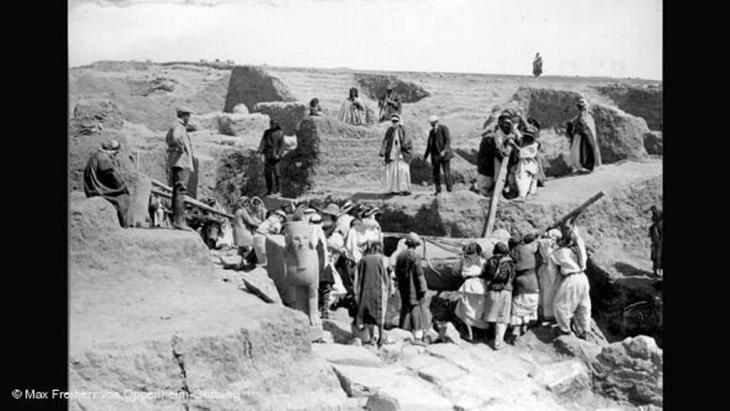 "Max von Oppenheim was tireless in his work. For many long years, he endeavoured to salvage the treasures of Tell Halaf, which are currently on show in the Art and Exhibition Hall of the Federal Republic of Germany in Bonn, and to present them to the peoples of both the Near East and Europe," writes Kersten Knipp

Motivated by a love for a bygone era

Max von Oppenheim was tireless in his work. For many long years, he endeavoured to salvage the treasures of Tell Halaf, which are currently on show in the Art and Exhibition Hall of the Federal Republic of Germany in Bonn, and to present them to the peoples of both the Near East and Europe.

Such energy does not arise without powerful motives. As far as anyone can be certain, Oppenheim's enthusiasm for the Arab world was awakened by his reading of the "Arabian Nights". In other words, it was this mythical, long-lost world that exerted such a mighty influence on Oppenheim, sparking his interest and keeping it alive throughout the decades of his life's work. To this day, it is perhaps this love of mythology that remains the strongest motive for all those who are preoccupied with the Near East even though they don't actually come from there; for those non-native speakers of Arabic, who have devoted years of their lives to learning the language.

The mythical, fantasy landscape that is the Orient, continues to cast a spell, triggering strong impulses to delve into the culture and language of the region. Oppenheim's whole life shows how difficult it is to reconcile conceptions the Orient with the reality of the Near East as it actually exists – the mythical dream versus the reality of the region's political landscape. To allow oneself to be enchanted without actually loosing sight of the realities of the region is an art that to this day is at the very heart of all research into Islam and the Arab world.

The exhibition "An oriental adventure: Max von Oppenheim and the discovery of Tell Halaf" at the Art and Exhibition Hall of the Federal Republic of Germany in Bonn runs until 10 August 2014.

Home
Print
Newsletter
More on this topic
Photo gallery: Max von Oppenheim and the discovery of Tell HalafMax Baron of Oppenheim: An Encyclopedic Travelogue Free from the Arrogance of the TimeAn Elegant Pilgrimage: Baron Heinrich von Maltzan in MeccaLawrence of Arabia: Scratching the Surface of the Myth
Related Topics
Al-Azhar, Archaeology, Clash of civilisation, Colonialism, Islam and the West, Islamic architecture, Islamic art, Jihad, Travels in the Orient
All Topics

They’ve already got the Louvre; they’ll soon have a Guggenheim Museum as well – and now the Emirates have added literature to their quest for cultural supremacy in the Arab world ... END_OF_DOCUMENT_TOKEN_TO_BE_REPLACED

Years in the making, Sisi's elite New Administrative Capital will isolate most Egyptians from their centres of government in an effort to fortify the regime against any social ... END_OF_DOCUMENT_TOKEN_TO_BE_REPLACED

Professor Timothy Brennan's "Places of Mind: A Life of Edward Said" is a detailed biography of one of the most important intellectuals of the twentieth century, taking us on a ... END_OF_DOCUMENT_TOKEN_TO_BE_REPLACED

China has long portrayed itself as a strong supporter of the Palestinian cause. It has also claimed that in sharp contrast to the stance of the USA, its position is based on ... END_OF_DOCUMENT_TOKEN_TO_BE_REPLACED

Recep Tayyip Erdogan, disappointed by the European Union’s reluctance to integrate Turkey into its ranks, has re-directed his country’s diplomacy toward the Maghreb and Africa to ... END_OF_DOCUMENT_TOKEN_TO_BE_REPLACED

Comments for this article: Mythos Orient

END_OF_DOCUMENT_TOKEN_TO_BE_REPLACED
Social media
and networks
Subscribe to our
newsletter