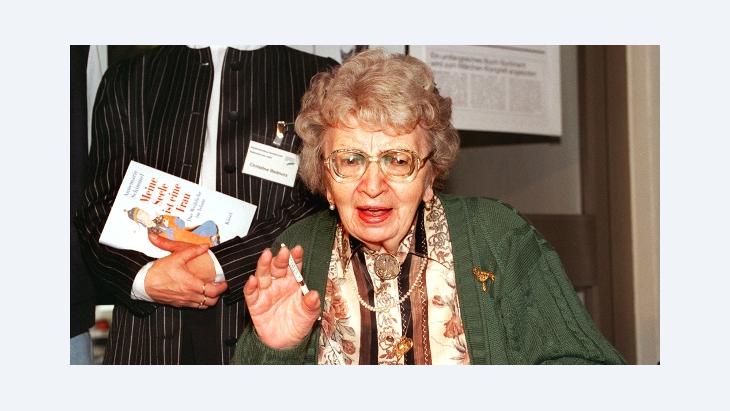 As one of the most eminent western scholars of Islam, Annemarie Schimmel is still held in high esteem in the Islamic world. But despite being a kind of a mystic herself, the German got entangled in the fraught relations between East and West. Ten years after her death, Stefan Wild takes stock of her life and work

﻿Annemarie Schimmel grew up against the backdrop of the rise of National Socialism, an era in which the other was despised and the own idolized. It was during this period, when being of "German nature" and belonging to the "Aryan race" were considered of the highest value, that Schimmel, while still a schoolgirl, took private lessons in Arabic and fell under the spell of this Semitic language.

While her peers were dreaming of the German flag, German blood, and the German Führer, Annemarie Schimmel turned her attention towards the very different world of a culture and religion that still seemed very distant at the time: Islam.

By turning her attention to Islam in this way, she was at the same time fleeing the catastrophe that was the Second World War. She was a young woman of great linguistic and literary talent, and her swift rise through the ranks of the academic world was unprecedented. In 1946, in the midst of the landscape of ruin and destruction that Germany had become, she completed the habilitation process for Islamic Studies at the University of Marburg. She had just turned 23.

After the war, she sought and found the company of Muslims and proximity to Islam, initially in Turkey, which was at the time still entirely Kemalist. 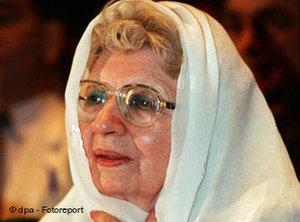 ​​In 1954, she became Professor for Religious History at the University of Ankara, where she taught "The history and phenomenology of all religions with the exception of Islam" in Turkish. She soon spoke Turkish as fluently as her own native tongue.

In Ankara, she married a Turkish engineer. The marriage soon ended in divorce. She kept this union a secret throughout her life. It is perhaps for this reason that it was promptly and erroneously said of her that she had converted to Islam during this period, something that was considered cultural high treason against the most sacred treasures of the West by the unwritten rules of Islamic Studies in Germany at the time.

Throughout her life, Annemarie Schimmel felt a deep bond with the Islamic religion and its cultures. She was often asked by both Muslims and non-Muslims alike whether she was a Muslim or not. In such cases, she preferred to give an evasive answer, saying, for example, that only those who are not sure whether they are good Muslims or not can really be good Muslims. She loved Islam, but only as long as she did not have to belong to it. Perhaps it was the effort of maintaining this balancing act that was one of the driving forces behind her incredible productivity.

Her strengths were the conveyance of the most difficult mystical and poetical texts from Arabic, Persian, Turkish, Urdu, Pashto and Sindhi into German and English on the basis of a philological knowledge of sources. While her analyses of the creative image worlds of Islamic mysticism and poetry opened up new dimensions for both academics and lay people alike, she put her translations from the Islamic languages into a form that was met with interest and in some cases even delight by a learned European and American readership.

She succeeded in conveying through adaptation the aesthetic and intellectual rank of such scripts without ever betraying the originals. In this respect, she emulated her role model, Friedrich Rückert, whose ingenious interpretative translations of large parts of the Koran and Arabic and Persian poetry she greatly admired.

The concept of a world literature in line with the principle that "world poetry alone is world reconciliation" suited her down to the ground. Her love of her subject fascinated some and repelled others. The downside of this love was the fact that she was frequently accused of getting carried away. "I cannot work on something that I do not love," she said on numerous occasions, often earning herself the spiteful derision of others in her profession.

The subversive nature of mysticism 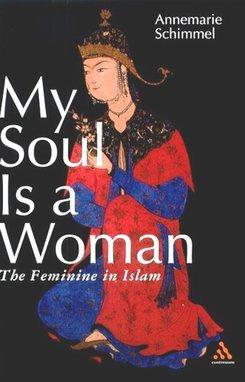 Annemarie Schimmel had a keen sense of the female side of Islamic spirituality. Pictured: cover of "My Soul Is a Woman - The Feminine in Islam"

​​In her interpretation of Islamic mysticism – "the inner life of Islam", as she put it – Annemarie Schimmel focussed in particular on what she considered to be its subversive aspects.

The Islamic orthodoxy of the legal scholars and their schools did not interest her. For her, the core of Islam was not Sharia, the Islamic law that takes multiple forms and is obsessed with details, and certainly not the misanthropic theory and practice of many modern Islamists.

Instead, she repeatedly focused on the inimitable individuality of the mystic. The Islamic mystic, whether male or female – she had a keen sense of the female side of Islamic spirituality and investigated it accordingly – sets out on a journey inwards, and some of what European texts termed the individual freedom of the person at a much later date are anticipated in the texts of Islamic mysticism as the pantheistic union of the human and the divine, as a socially unwieldy insistence on an individual, immediate access to the truth that is not available to political religion, as a stammering reference to that which can no longer be spoken.

Annemarie Schimmel repeatedly addressed this subject afresh with a mixture of profound familiarity on the one hand and an equally profound respect for all individual religiousness on the other. In those cases where she outlined the conflict between orthodoxy and heretics, between the Islam based on the law and mystical Islam, she generally came down on the side of the heretics.

When Annemarie Schimmel accepted the internationally renowned Peace Prize of the German Book Trade in St Paul's Church in Frankfurt on 15 October 1995, she was drained and at the end of her tether.

Over the course of the months during which her half-hearted, unclear statements on Salman Rushdie's book The Satanic Verses had been discussed in public and as a result of the reaction to these statements in the Islamic world, she felt that the collapse of her life's work was imminent.

In 1995 Schimmel was awarded the prestigious Peace Prize of the German Book Trade. This award caused a controversy in Germany, as she had defended the outrage of the Islamic world against Salman Rushdie in a television interview. Although the eulogy of the then German president, Roman Herzog (pictured), brought her some comfort, she avoided public discussion of the subject for the rest of her life

​​Although the eulogy of the then German president, Roman Herzog, brought her some comfort, she avoided public discussion of the subject for the rest of her life.

Annemarie Schimmel was not trying to provide a transfigured image of the true state of most regimes under which Muslims now have to live. Nor did she deny that Salman Rushdie had to be protected against fanatics or that the death sentence proclaimed by Imam Khomeini in the guise of a fatwa was not only a horrendous travesty of justice, but also seriously impaired the image of Islam among non-Muslim people. She nevertheless shied away from any clear criticism of "real existing political Islam" throughout her life. She insisted that it was only permissible for her to address the ideals of this religion.

It was Annemarie Schimmel's request that the first sura of the Koran be recited over her coffin as a sign of reconciliation between the religions that went beyond her death. Sheikh Ahmed Zaki Yamani, a long-term confidant of Annemarie Schimmel and chairman of the London-based Al-Furqan Foundation to which she was an advisor, recited the Fatiha at the close of the Protestant service held in the Kreuzkirche in Bonn on 4 February 2003. 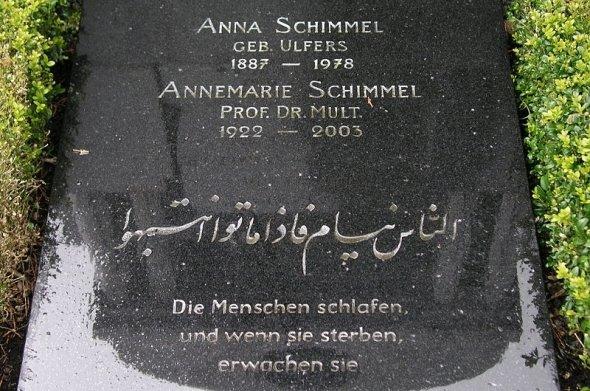 "An inimitable ability to awaken understanding for Muslims and Muslim high cultures among broad sections of the European public": The phrase on Schimmel's tombstone reads: "People are asleep. When they die, they awaken"

Annemarie Schimmel received many high honours throughout her life. She was the embodiment of a kind of Islamic Studies that hardly anyone today would dare pursue. Her death was undoubtedly mourned longer and more profoundly in the East than it was in the West. With her death, the world lost a woman who stood between the religions and the cultures like no other, who communicated with the Islamic world and who built bridges between East and West.

Time may not heal all wounds, but it often helps us see things more clearly. Annemarie Schimmel's merits were often praised. Equally so, she was often castigated for her undeniable weaknesses.

Many, however – whether learned or not – sorely miss her inimitable ability to awaken understanding for Muslims and Muslim high cultures among broad sections of the European public, an ability that was always unassuming despite her vast knowledge. I count myself among this number.

Stefan Wild was Professor for Semitic Philology and Islamic Studies at the University of Bonn, where he was made professor emeritus in 2002. He is co-publisher of the magazine Die Welt des Islams (The World of Islam), an international magazine about the history of Islam in the modern age.

Since Ali Khamenei, Iran's most powerful man, has openly and unconditionally come out in support of Putin's war in Ukraine, logistical help is on its way, with an allegedly ... END_OF_DOCUMENT_TOKEN_TO_BE_REPLACED

Tourists have been returning to Tunisia, Egypt and Morocco. But, given the global uncertainty caused by the Ukraine war, will the comeback be enough to save a struggling sector, ... END_OF_DOCUMENT_TOKEN_TO_BE_REPLACED

The highly controversial Indian blockbuster "The Kashmir Files“, on the exodus of Kashmiri Hindus in the 1990s, is characterised by unilateral representations, negative ... END_OF_DOCUMENT_TOKEN_TO_BE_REPLACED

"Flugt" is the world's first museum dedicated to the stories of those forced to flee. The new museum, which focuses on the fates of refugees then and now, is housed in a former ... END_OF_DOCUMENT_TOKEN_TO_BE_REPLACED

Comments for this article: Searching for the Inner Life of Islam

If one wants to know the true 'Ideals of Islam' one should read her work. One of the great contemporary scholar who brought the true spiritual teachings of Islam to the west.
' May God Rest Her Soul in Peace.' Amen

END_OF_DOCUMENT_TOKEN_TO_BE_REPLACED
Social media
and networks
Subscribe to our
newsletter