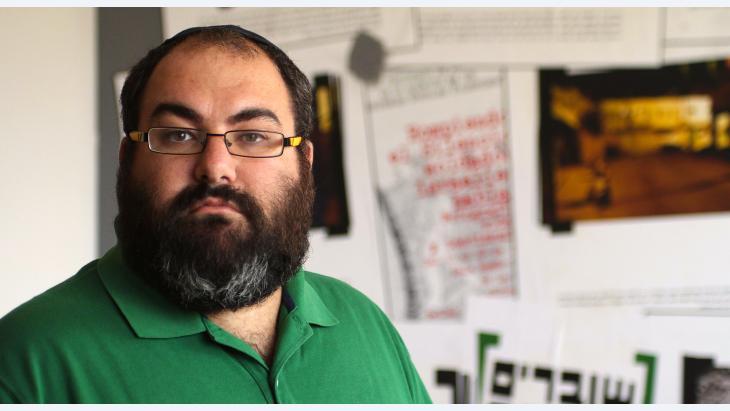 Yehuda Shaul, a former soldier in the Israel Defense Forces (IDF), is one of the founders of the Israeli NGO Breaking the Silence. Marian Brehmer talked to him about Operation Protective Edge and the link between the Gaza war and the occupation of the Palestinian territories

In Operation Protective Edge, violence against civilians in Gaza seems to have peaked. Is this impression correct?

Yehuda Shaul: To answer this question with certainty, more investigation will be needed. But in the current operation, we are seeing certain policies that were still unthinkable a few years ago.

Let me give you an example. One of the soldiers involved in Operation Cast Lead in 2009  gave testimony to Breaking the Silence and told us a story that occurred on one of the first days of the operation: while on duty, he observed two or three Palestinians leaving a house about 200 metres in front of him. Shortly afterwards, they returned to that house. He radioed all the details about their movements to headquarters. In response, the headquarters ordered a bomber plane to bomb the house. The soldier was shocked and protested that the men were unarmed and posed no direct threat to the army. The Shin Bet, Israel's secret service, replied that the house was owned by a Hamas activist and so it had to be bombed. The house was immediately reduced to rubble although there were women and children inside.

It is a fact that in "Cast Lead" these kinds of incidents were sporadic. But in Operation Protective Edge it has become a general operation policy. Houses are blown up although you know there are families inside.

How did this brutalisation of the Israel Defense Forces come about?

Shaul: From one operation to the next, Israel and the IDF are just going down the drain. As a country, the moral low we reached in the previous operation is the point from where we start the next one. This is how it continues. Operation Protective Edge continued where Operation Cast Lead ended.

The methods now being used are just insane. As a warning, the army drops small bombs on the roofs of houses or gives the inhabitants a short timeframe to leave the house before they destroy it. But even if they know the family hasn't left the house yet, in many cases the house is still bombed. And that's how you kill an entire family.

The very idea that you will get a death penalty because you didn't listen to our warning – it is insane. And let me repeat once again: these are not the houses from where someone shoots at our troops. These are just houses in the middle of Gaza. They don't pose any direct threat to our troops.

Has the way Israelis look at Palestinians changed with the current war?

Shaul: To understand the dynamics of Operation Protective Edge, we need to also look at the reality of occupation. As a soldier employed in the occupied territories, you don't need any brainwashing when a new operation comes; the world is very simple when you are in the occupied territories: there is us and there is them. There is black and there is white. Everything we do is right and everything they do is wrong.

As for Israeli society, we are in a very bad condition. We have maintained the occupation for 47 years. People in Israel are so numb. They are just no longer able to see Palestinians as human beings. We are so indifferent to the suffering of the other side. It is almost a crime today in Israel to have empathy for the suffering of the other side, even though you are talking about women and children.

What effect does all this have on the psychology of the soldiers?

Shaul: When you are on duty as a soldier in the occupied territories you of course evaluate your actions and think a lot about right and wrong. Sometimes, you imagine a certain action and tell yourself you would never do something like this. And then the week after you find yourself doing exactly what you promised yourself not to do. And then, slowly but steadily, you will cross all these red lines one after another. It is only after you crossed five of these lines that you understand you broke your moral principles.

For instance, at the beginning of your military service, you break into a Palestinian house in the middle of the night and you wake up the whole family. Children start to cry. You really feel something inside. You feel that things do not fit. But slowly, slowly you get used to it, because as a soldier, that's what you do every day and every night. And you start to forget that these are families and that you are basically taking over their lives.

Did you have similar experiences when you served as a soldier?

Shaul: Let me tell you an anecdote from my service in the occupied territories: I remember being on an operation in a refugee camp near Ramallah in 2002. It was one week of searching house after house. Meanwhile, the FIFA world cup was going on. There was an important match that we all wanted to watch. Brazil was playing and our officer was a big fan of Brazil. So, half an hour before the start of the game, we stopped the searching and went out to the street, looking for a house with a satellite dish. We found a house, broke into the house, locked up the family in the bottom floor and watched the match. It just seemed like the most reasonable thing to do. And no one can question it. You simply get used to it.

Why hasn't there been more protest in Israel against the current Gaza war?

Shaul: This time, the atmosphere in Israel was very bad, even worse than in previous operations. There was no space for question marks, absolutely no space. I am not just talking about the media. There were many anti-war protestors beaten up in Tel Aviv and Haifa by gangs so they had to be taken to hospital. And the police did nothing to protect them.

On the other hand, there were politicians and high officials calling in newspapers for neighbourhoods in the Gaza Strip to be wiped out. There was a case of a university professor at Bar Ilan University who suggested in a radio interview that one way of dealing with the terrorists might be to rape their women. And unfortunately, a lot of space is given to these extreme voices. Whereas critical voices hardly get any platform these days.

Meanwhile, the picture of Israel in the West is getting worse. How do you feel in Israel when you see how the world is reacting?

Shaul: Well, Israel is getting worse. We uphold the occupation. We continue to build settlements. We increase our military rule over the Palestinians. Israel is not heading for a way out. We are digging ourselves in. We are doing everything we can to maintain the occupation. But as an Israeli, I find the anti-Semitic sentiments by some of the protestors in Europe very disturbing. They are not only inacceptable, but they also help Israel to repeat its motto again and again: it's all the world against us.

How do people in Israel react to you for being an anti-war activist?

Shaul: I am not an anti-war activist. I am not a pacifist. I think Israel has a right to defend itself and even more, I think Israel has an obligation to defend itself. I am just against using force in the way that we use it. I am against the idea that people are getting killed because they didn't listen to our phone calls. Who on earth can accept something like this?

Of course many people see the activists of Breaking the Silence as traitors. But if you would have come to me ten years ago and told me that we would now have almost 1,000 soldiers who broke their silence, I would have laughed in your face. That is almost 1,000 people who changed their minds. And their stories about what the occupation is really like are now available to the public.

Some voices say that the biggest security threat to Israel is not Hamas but the on-going occupation of the Palestinian territories. What is your point of view?

Shaul: I agree. The only way for Jews to implement their right to self-determination in Israel is to stop stripping the Palestinians of the same right. In fact, the treatment of the Palestinians is the biggest threat to Israel. It undermines the legitimacy of the state of Israel.

I don't believe that it's either us or them. It is exactly the opposite: the security of Israel depends on a sovereign Palestinian state beside us and on giving dignity and rights to the Palestinians. In Israel, we are now in a fight over the heart and the soul of our society. The questions are: who are we as a society? What country do we want to live in? The question is whether dropping all these bombs on families is something acceptable in our eyes or not.

Yehuda Shaul served as an infantry combat soldier and as a commander in the IDF and is a founding member of Breaking the Silence, an Israeli organisation of veteran combatants who have served in the Israeli military and have taken it upon themselves to tell the Israeli public about the reality of everyday life in the occupied territories. To date, the organisation has collected about 1,000 testimonies from soldiers from all sections of Israeli society and almost all units operating in the territories.

Asmaa al-Atawna's debut novel "Missing Picture" has been published in German translation (Keine Luft zum Atmen – Mein Weg in die Freiheit). In it, she describes life in Gaza from ... END_OF_DOCUMENT_TOKEN_TO_BE_REPLACED

At the end of every year, the team at Qantara.de gives you a run-down of the ten most-read articles on the site over the past 12 months. Here is a quick overview of the stories ... END_OF_DOCUMENT_TOKEN_TO_BE_REPLACED

Palestinian Christians are an integral part of the Palestinian national movement. This is the conclusion reached by the Chilean-born Palestinian political scientist Xavier Abu Eid ... END_OF_DOCUMENT_TOKEN_TO_BE_REPLACED

Jesus – Issa in Arabic – doesn’t merely enjoy the highest place among the prophets in the Koran. He is also revered in Islam’s mystical tradition for his message of love and mercy ... END_OF_DOCUMENT_TOKEN_TO_BE_REPLACED

With reported hostilities against Israeli journalists and the flag of the Palestinian territories flying on the streets and in the stadiums, it is clear the World Cup in Qatar is ... END_OF_DOCUMENT_TOKEN_TO_BE_REPLACED

I wish all people reach the

I wish all people reach the degree of honesty and understanding this man has reached. If all people were like him we would not see this ridiculous war which its only outcomes are killing innocents and producing more anti Israel forces. With current brutality I see it quire natural for current Palestinian kids to become Hamas members when they grown up.

END_OF_DOCUMENT_TOKEN_TO_BE_REPLACED
Social media
and networks
Subscribe to our
newsletter