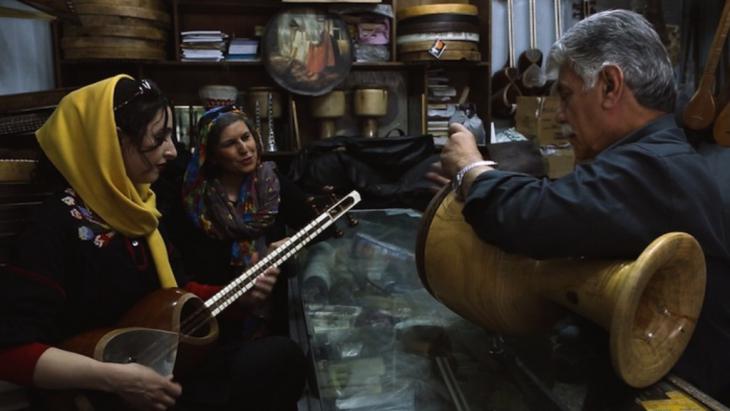 It sounds like a completely mad enterprise: in Iran, a country where women have not been allowed to sing unaccompanied in public in front of men since the 1979 revolution, an Iranian woman sets out to organise a concert of women singing Iranian songs. The documentary "No Land's Song" charts her progress. Richard Marcus saw the film

Singing is one of the things that comes naturally to any human being. We all do it, whether we are any good or not is immaterial. So the very idea of dictating where and how someone can sing because of their gender, or any other reason for that matter, is almost as appalling as limiting one's speech for the same reason. To do so because "God wills it" or for any other supposed religious reason is simply a lame excuse for trying to oppress one segment of a population. Unfortunately, no matter what the religion, far too often the segment of the population affected by such restrictions is women.

Since the revolution of 1979, no woman in Iran has been allowed to sing unaccompanied by a man in front of an audience that includes men. The documentary film "No Land's Song" is about Sara Najafi and her struggle to change her world and give women in her country a voice once again.

Documentary and history lesson in one 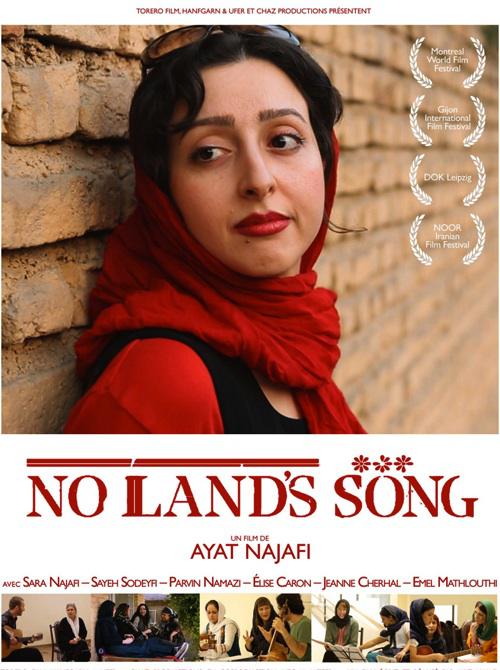 "No Land's Song" is a documentary that follows Sara Najafi as she struggles to overcome bureaucracy, intolerance and fears to realise her dream of organising a concert featuring women singing Iranian music in public

Directed by her brother, Ayat Najafi, the film traces her path as she struggles to overcome her government's bureaucracy, intolerance and fears to realise her dream of a concert featuring women singing Iranian music. The film is also a history lesson, showing us the glory days of cabaret and vocal performances in Tehran. Accompanied by Parvin Namazi, a singer who used to perform before the revolution, Najafi takes us on a tour of the city showing us the remains of what used to be the cabaret district. What look to be crumbling warehouses are revealed to be the remains of beautiful rococo theatres that wouldn't look out of place in Paris.

The film takes us to cafes and music shops where we meet older men who talk about the days prior to the revolution when they visited cabarets and listened to the singers and the music. One cannot speak of female singers and Iran without mentioning Qamar-ol-Moluk Vaziri. In the 1920s, she was the first woman to sing in public in Iran without wearing a hijab and in front of a mixed audience. It was from her that Najafi took her inspiration in her quest to liberate woman's voices to sing in Iran again.

As a composer, Najafi is very familiar with Iran's music history and the prohibitions that came into effect after the revolution. Ironically, despite the restrictions in place and the limited opportunities for women in the music sector, four times as many young women as men enter music programmes every year. Najafi talks about some of the difficulties women face when learning and teaching music. She talks about having to give lessons without actually singing, through theory alone, because there are men in the class.

Given this information, her quest to obtain official permission to stage a performance by women singers in front of a mixed-gender audience seems both Quixotic and doomed to failure. Further complicating her mission is her decision to include musicians from France, including three female singers based in Paris: Elise Caron, Jeanne Cherhal and Emel Mathlouthi. The latter might have been the most controversial as her song, "Kelmti Horra" (My Word Is Free), became the anthem of Arab Spring revolutionaries. It turns out that it's no coincidence the old theatres in Tehran are reminiscent of Paris, there used to be strong cultural ties between the music communities of Iran and France; one of Najafi's goals is to rebuild that connection.

Unfortunately the climate in Iran after the crackdown on the Green Movement was not conducive to ideas that would rock the conservative status quo. How do you overcome laws that are based on the idea that women are responsible for the actions of men? Najafi visits a religious scholar to find out the reasons for the restrictions on women singing. She's told that a women's singing voice can lead men's thoughts away from the path of virtue.

As if this weren't bad enough, her conversations with the Ministry of Culture regarding the concert are examples of bureaucratic double-speak that would give George Orwell nightmares. While unable to film these meetings, she did record them, so we hear the conversations and what she was up against. At first it looks like there's no chance it will happen as she's told to wait until after the next presidential election: "maybe then things will be better".

Even after the next presidential election, which was won by the current moderate government, she's told "well, it's difficult and we don't want to give conservative elements an excuse to make trouble". She is asked to make compromises. Even when she's been given the go-ahead to invite the French musicians to Iran to prepare for a public concert, she is called in to the Ministry of Culture at the last minute. After viewing a rehearsal, they have changed their mind about letting it go ahead in public. It's only when the French musicians threaten to go home without performing that the government backs down and lets them go ahead.

The film not only does a wonderful job of telling Najafi's story, it also gives a glimpse of an Iran we very rarely see. Yes, there is some repression and fear, but there is also an atmosphere of hope. We see this isn't some monolithic entity all expressing the same views, but a collection of diverse people with a fine sense of who they are and their country's history. Najafi is a wonderful example. While her country's bureaucracy reduces her to tears when it looks like her hopes will be crushed, her joie de vivre and determination are inspiring and are partially fuelled by the love she bears for her country.

While the fact she accomplishes the seemingly impossible and not only stages the concert she has dreamed of in public, but has permission to film it, is in itself wonderful, the film reveals that it is Najafi herself who is remarkable. It is also a lesson for the rest of us on what a determined person can accomplish when they put their minds to it.

If you get a chance to see "No Land's Song" at one of the many festivals it is appearing in from April to June 2015 in Europe and New York, don't miss it. You'd have to be heartless not to be inspired and enriched by this beautifully told story.

Home
Print
Newsletter
More on this topic
Interview with Ramin Sadighi from the Iranian music label Hermes Records: The fine line between what is permitted and what is notMusic and power in Iran: An instrument of propaganda and controlMusicians in Iran: An uphill struggle all the wayBook Review: "I'm Probably Lost" by Sara Salar
Related Topics
Feminism in Islam, Iranian cinema, Iranian music, Musical worlds
All Topics

The catastrophic human rights situation in Bahrain is being largely ignored by the rest of the world. Despite all the damning evidence, which includes a Human Rights Watch report ... END_OF_DOCUMENT_TOKEN_TO_BE_REPLACED

The many terrorist attacks France has faced over the last ten years have poisoned the political discourse, especially when it comes to migration. Since 2012 a relentless stream of ... END_OF_DOCUMENT_TOKEN_TO_BE_REPLACED

Etel Adnan, the artist who transcended the borders of culture and language, may have died in Paris, writes Lebanese author Elias Khoury, yet her death holds a mirror up to the ... END_OF_DOCUMENT_TOKEN_TO_BE_REPLACED

Shot, beaten to death or drowned: a demonstration by tens of thousands of Algerians ended in the "Paris Massacre" on 17 October 1961. Sixty years on, historians and victims' ... END_OF_DOCUMENT_TOKEN_TO_BE_REPLACED

Western states have fought against terrorism not only in Afghanistan, but also in Syria and Iraq – leaving behind people who were once their partners in fear and poverty. Hisham A ... END_OF_DOCUMENT_TOKEN_TO_BE_REPLACED

Newly discovered aerial photographs taken by the German Luftwaffe show what a keen interest the Germans took in British-controlled Palestine during the Second World War. Not only ... END_OF_DOCUMENT_TOKEN_TO_BE_REPLACED

Comments for this article: One woman's quest to make Iranian women's voices heard

END_OF_DOCUMENT_TOKEN_TO_BE_REPLACED
Social media
and networks
Subscribe to our
newsletter