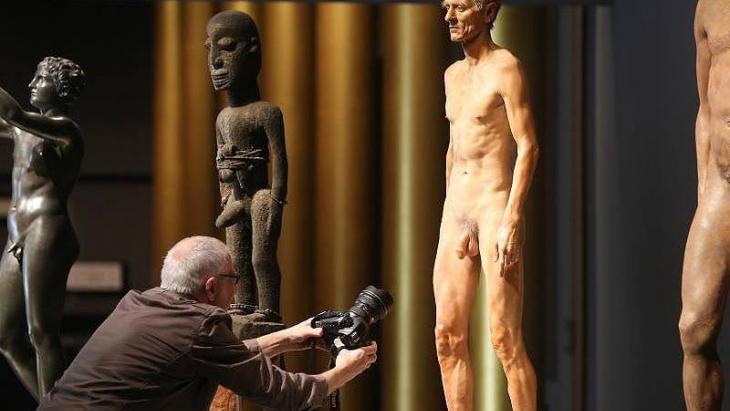 An objective examination of a controversial issue

With its exhibition "SNIP IT! Stances on Ritual Circumcision", the Jewish Museum in Berlin offers surprising and diverse insights into the significance of a ritual about which few people in Germany know very much at all. Igal Avidan went to see the exhibition

Visitors to the "SNIP IT!" exhibition are greeted by six sculptures of naked male figures standing on a metal platform in the shape of knife. The gaze is drawn to their genitalia. The figure of the Greek boy with raised hands is the odd one out in this group; he is the only one not to be circumcised. Can this be correct?

A map of the world illustrates the surprising fact that most men in Africa, the Middle East, North America and Australia have had their foreskins removed. In fact, one in three men worldwide is circumcised.

In 2012, a court in Cologne defined ritual circumcision as a form of injury. This ruling sparked an intense debate about the legality of the ritual circumcision of minors. This discussion focused either on legal questions – freedom of religion versus protection of children – or medical ones – for example, whether the circumcisers have received the necessary medical training.

"The religious and ritual significance of circumcision was hardly mentioned," says Cilly Kugelmann, programme director of the Jewish Museum Berlin. "This gave me the idea to do an exhibition that would focus on the theological reasons for circumcision."

The German title of the exhibition, "Haut ab", is intentionally ambiguous, meaning both "skin off" as well as "get lost". It is a reference both to the foreskin, which is removed during circumcision, and to Jewish and Muslim people in Germany, who perceived the circumcision debate as a demand to kindly "get lost" and leave Germany if they insisted on continuing this ancient ritual.

In the knowledge that they are dealing with an emotionally charged subject, the organisers of the exhibition have made every effort to tackle the subject objectively and soberly. This is even reflected in the architecture of the exhibition with its dark grey walls and columns painted in silver, gold or copper. The design of the exhibition also connects not only Jews and Muslims, but also Christians. Circumcision in the three monotheistic religions is explain in wall texts and presented using precious objects displayed on a round blue platform that stretches through three rooms. 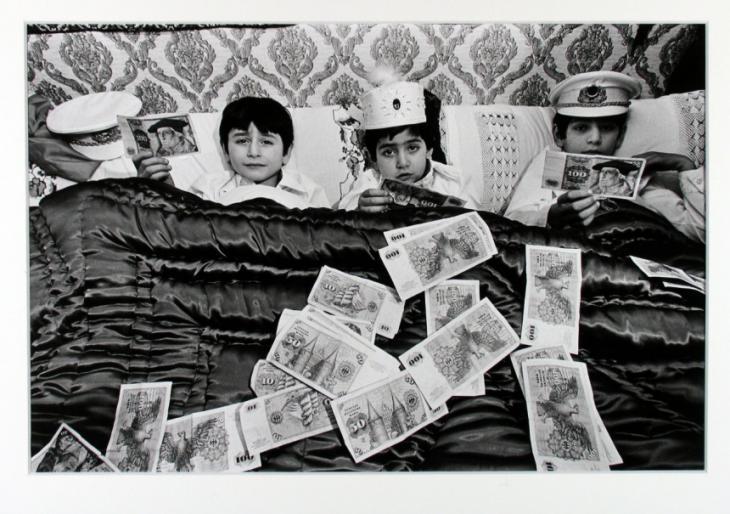 Photo entitled "Three brothers after circumcision" from Henning Christoph's photo series "Turks in the Ruhr region". According to Igal Avidan, the military uniforms and officers' caps worn by Turkish children on the day of their circumcision went out of fashion with the increasing Islamisation of Turkish society. They have been replaced by princes' costumes

In the exhibition area devoted to Judaism, ritual objects and scriptures highlight the diversity of customs relating to circumcision. Regardless of the custom, however, circumcision in Judaism always takes place on the eighth day after the birth of the baby boy and is carried out by a traditional circumciser, a mohel.

A gold-plated double cup, on which Jewish blessings are engraved, explains the various stages of the circumcision ritual. The mohel allows a few drops of the baby's blood to fall into the first cup; from the second, he drinks the wine after saying the traditional blessing.

Various amulets from Greece exemplify the lengths to which Jewish parents would go to ensure the well-being of their newborn child. For example, a tiny dagger and a few coins would be sown together to the baby's bonnet in order to protect both mother and child from the "evil eye".

Iranian Jews would place a walking stick next to the "circumcision bank", which is also known as "the chair of Elijah". This stick was intended for the prophet Elijah, who is considered the protector of infants and, as "the angel of Abraham's covenant", is present at every circumcision. Elijh is said to use the stick to lower himself into his seat to rest from his many journeys.

From the middle of the nineteenth century onwards, increasing efforts were made to ensure that circumcision practices complied with general medical standards. An official certificate from Western Prussia dating from 1858 declares that the Jew named on the certificate was capable of working as a "circumciser" according to Jewish tradition.

The exhibition area devoted to Islam focuses on Turkish immigrants, especially those in Germany. While the Koran does not explicitly mention circumcision, the Sunnah, the body of sayings and customs attributed to Muhammad, identifies it as a Muslim act. Visitors to this area are greeted by a wonderful commentary from the eighteenth century and a baby's circumcision robe from Tunisia.

Unlike Jews, Muslims do not have to conduct the circumcision on a specific day. The only specification is that it must be done before they reach puberty. In the photo series "Turks in the Ruhr region", Henning Christoph documented mass circumcisions that took place between 1978 and 1985. In one photo, a line of boys, all of them elegantly dressed and wearing officers' caps that are too big for them, stand on a bank decorated with the Turkish flag. They are waiting to be circumcised.

In another photo, a boy of around seven years lies on a bed next to the circumciser, who is dressed in a white doctor's overall. From the wall behind, Ataturk, the founder of modern Turkey, gazes down at them.

With the increasing Islamisation of Turkish society, the military uniforms that children would wear for such celebrations went out of fashion. They were replaced by princes' costumes which are, incidentally, made in China. "Secular Muslims tend to carry out the circumcision immediately after birth, in order to avoid a large celebration," says Martina Luedicke, one of the exhibition's two curators.

Many visitors will be surprised that Christianity makes up an important part of this exhibition. In Christianity, circumcision was largely replaced by baptism. Until the liturgical reform of 1969, Catholics celebrated the Feast of the Circumcision of Christ eight days after Christmas Eve (on 1 January). Some Christian Churches, such as the Orthodox Coptic Church, still continue the circumcision ritual.

Several works of art remind us to what intolerance and prejudice concerning circumcision can lead. They portray the circumcision of Jesus as part of his Passion. A copper engraving from the seventeenth century presents the alleged ritual murder of six Christian babies at the hands of Jews. The Nazi newspaper "Der Stuermer", which is also on display at the exhibition, used this very image on the cover in 1939 beneath the headline: "Ritual murder – the biggest secret of international Judaism".

In the media room at the end of the exhibition, one can watch not only the debate on circumcision that took place in the German Parliament but also the US-documentary "Cut: Slicing through the Myths of Circumcision". In it, the Jewish-American filmmaker Eliyahu Ungar-Sargon discusses with his Orthodox father the latter's decision not to circumcise his newborn baby. One wishes that the shrill debate about circumcision in Germany could have been carried out in such a sober and respectful way.

Political analyst Taqadum al-Khatib argues that Egypt can, in co-ordination with its European partners, develop a common vision to solve the complex conflict in Libya. For this to ... END_OF_DOCUMENT_TOKEN_TO_BE_REPLACED

The upheavals of the past year in the MENA region are arguably as momentous as those of the Arab Spring in 2011. Yet perhaps the biggest difference is that our interest seems to ... END_OF_DOCUMENT_TOKEN_TO_BE_REPLACED

In 2019, the long-running Penguin Classics series released its first novel translated from Arabic: Tawfiq al-Hakim’s "Return of the Spirit", conveyed into English by William ... END_OF_DOCUMENT_TOKEN_TO_BE_REPLACED

Equality in divorce, a ban on polygamy: reformers of Islamic family law have a clear agenda. They are exploiting the ambiguity of traditional jurisprudence. By Joseph Croitoru END_OF_DOCUMENT_TOKEN_TO_BE_REPLACED

Decades of oil exports have completely destabilised culture and politics in the Middle East. Speaking with Lena Bopp, the renowned writer Amin Maalouf says that the distorted ... END_OF_DOCUMENT_TOKEN_TO_BE_REPLACED

Comments for this article: An objective examination of a controversial issue

Let the children grow up and decide for themselves when they grow up at 18/21, like they can for donating a kidney or getting a tattoo.