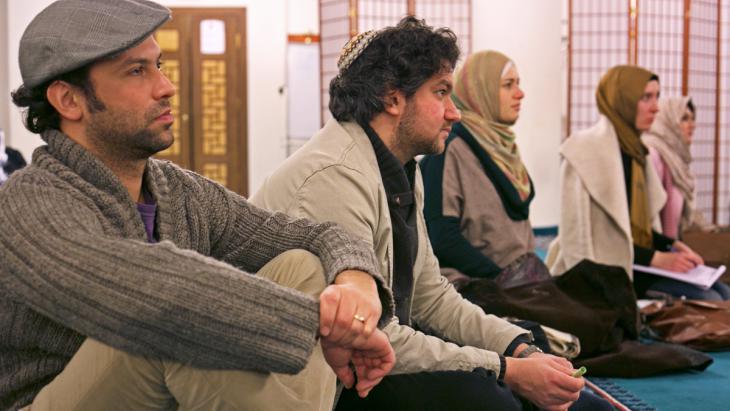 A year after its launch, the Salaam-Shalom Initiative has become one of the biggest intercultural groups in Berlin with dozens of events in mosques, synagogues and community centres. Armin Langer looks back on an eventful year

Two Jews are sitting in a mosque. David and me. David is a filmmaker of Israeli origin. I have just moved from Budapest to Berlin to continue my studies. Two Jews are sitting on the green carpet of the Sehitlik Mosque in Berlin's Neukolln district. David with the camera and me audibly struggling to hold authentic conversations with members of the congregation.

Ahmad, a young visitor from Uganda, sits down next to us. He listens attentively to our conversations although he doesn't understand German. He stares for a few more minutes and then speaks to us. "You're Jews?" he asks, surprised, making no pretence that two Jews sitting on a green mosque carpet was a normal occurrence.

He has never seen a Jew in his life, he admits. Ahmad does of course have an image of what a Jew might be like. His image of us isn't particularly positive; he associates the word "Jew" with the term "Israeli soldier". On meeting us in the Sehitlik Mosque, he says – ever the honest soul – that he changed his mind. "I'll tell everyone in Uganda about you nice Jews."

He admits that he never before thought that there were Jews outside the Israeli army. And because there are Jews somewhere in Uganda as well, he promises us he will make contact with them. He wants to spread a little Salaam-Shalom in his country. 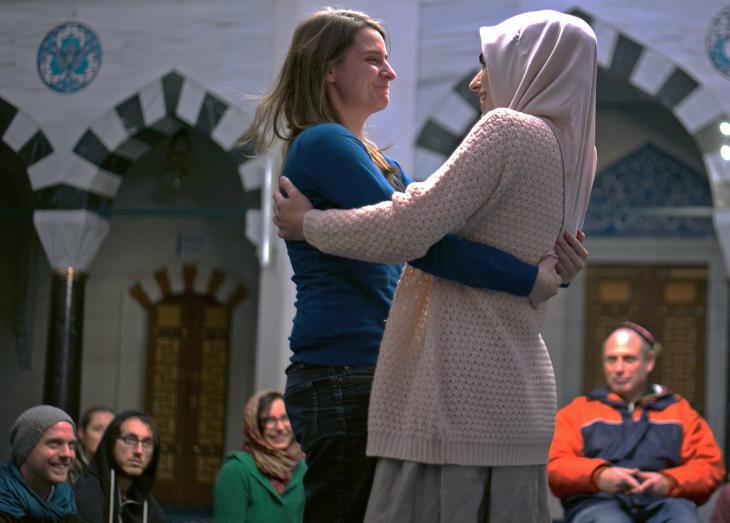 "Jews and Muslims Hand in Hand": Salaam-Shalom is an intercultural initiative that was founded in the Berlin district of Neukolln in December 2013. It stands for peaceful co-existence and solidarity between different religious groups in the district

Neukolln: a no-go-area for Jews?

David, our volunteer cameraman, is a very nice person, and I'm told I don't come across as repulsive either. Yet our personalities alone wouldn't have been enough to change Ahmad's mind about Jews quite so quickly. It was mainly down to the questions we asked the mosque visitors that day: How do you feel when you hear the statement that Neukolln is allegedly a no-go-area for Jews? Is "too many Muslims" a reason for Jews to avoid the area? How do you feel when Jews are said to be afraid of you?

My favourite answer came from a local Muslim woman: "My biggest problem with Jews is that whenever I invite my Jewish neighbours to dinner, I have to make sure I don't cook meat and milk dishes together." No, Neukolln isn't a no-go-area for Jews – that's what David and I and all the other Jewish and non-Jewish members of our Salaam-Shalom initiative learned during our first year. Jewish residents of the district confirm that impression in our first round of short interviews.

Having often heard that Neukolln was not a good place for Jews in Germany, we looked for people to talk to and found so many happy Jews in Neukolln that we had enough material for an edited hour-long YouTube video. But who would watch a whole hour of the same message over and over: "I'm a Jew and I feel safe and enjoy living in Neukolln."

Yet Rabbi Daniel Alter, the Berlin Jewish Community's anti-Semitism officer, had repeated his statement that Neukolln is a no-go-area for Jews too often and too publicly to be able to ignore it. The lesser problem with it was that it took no account whatsoever of Neukolln Jews' experiences. Some wear a kippa; others speak Hebrew in the street; none of us has to hide our Jewish identity in Neukolln.

But there's a more major problem with Rabbi Alter's statement: it stigmatises our Muslim neighbours, particularly those of Arab and Turkish origins. What we wanted was to break down stigmas that lead to distrust and tension, before they become dangerous for us and others.

Playing Muslims and Jews off against each other

The German federal government's statistics are clear and available to any interested party: more than 90 per cent of all anti-Semitic offences and acts of violence are committed by right-wing extremists, i.e. by native-born Germans who come not from a migrant background but presumably from a Western Christian background – if they regard themselves as religious at all. Many mainstream media outlets in Germany, however, were happy to play on the hypothesis of "imported hate", writing and broadcasting against today's Others, against Neukolln's Muslims and migrants. Anti-Muslim feeling sells like hot cakes when Muslims are portrayed in opposition to Jews.

It was neither the first nor the last time that we – and by that I mean Jews who are part of the country's mainstream – have been played off against Muslims and migrants who do not yet have such strong roots in Germany. For instance, the entire German public sphere suddenly seemed to consist of philo-Semites come late July, at the time of the Gaza War and the pro-Gaza demonstrations. A number of newspapers began writing about anti-Semitism as a purely Islamic-influenced foreign import. The simplest way to cast off responsibility – including the historical kind – was to blame the migrants!

At that time, in the summer of 2014, I was in Israel myself. When I told my Hebrew class at my university in Jerusalem what was going on in Germany, the lecturer asked me, "What, Armin, the Germans are saying anti-Semitism is a new thing in Germany?!" The language course switched into a crash course in discourse analysis on the subjects of anti-Semitism and racism in Germany.

Jews and Muslims are not enemies in Germany

The Israeli air force was on the attack in Gaza, there were anti-Semitic demonstrations on the streets of German cities and the German media were reproducing anti-Muslim agitation. On a Thursday morning in the midst of this mess, I made a call from a synagogue in Berlin to Ender, the imam at the Sehitlik Mosque. "We have to do something about it together," I said. And so, the mosque congregation and the Salaam-Shalom Initiative sent out a joint invitation to a flashmob. And we didn't chose just any location: in the middle of a street festival organised by Berlin's Palestinian community, we wanted to show that Jews and Muslims are not enemies in Germany.

Standing up for peaceful co-existence and fighting prejudice and incorrect claims about the hatred between Jews and Muslims: the Salaam-Shalom initiative

Some demonstrators brought along tasbihs, Muslim prayer beads, others came wearing kippa on their heads, while some decided against symbols altogether; their mere presence meant enough in itself. We weren't demonstrating for peace in the Middle East – that's a separate issue – but instead against anti-Muslim and anti-Semitic agitation in our country, in Germany.

We said no to the deliberate, artificial and media-supported importation of conflicts; our motto was "Jews and Muslims hand in hand". When I registered the flashmob at the last minute, the police officers on duty warned me against sending Jews in kippa into a large gathering of Arabs in Neukolln. Now they looked on in surprise as everything remained peaceful and many visitors to the Arab event spontaneously joined in our human chain for peace in Germany.

"Jews and Muslims Hand in Hand" was the heading for numerous public talks and workshops we organised over the past year in community centres, synagogues, mosques, sometimes in private apartments or public parks. These encounters often brought surprises with them. The mainstream narrative tells us on an almost daily basis about "the natural enmity between Jews and Muslims" – and personal encounters break down these artificial walls.

We held our birthday party this week in the district of Wedding. The choice of location was a deliberate statement; after all, we're an initiative "for peaceful co-existence in Neukolln and beyond".

Although most of our events this first year were held in Neukolln and the majority of our members come from the district, our message goes out to everyone. Peaceful coexistence and solidarity among different social and religious groups is a matter for everyone – no matter what conflicts are stirred up. And who knows, maybe our neighbourhood will be the birthplace of peace elsewhere.

Armin Langer is the co-ordinator of the Salaam-Shalom Initiative. After his philosophy degree in Budapest, he came to Berlin. He is currently studying Jewish Theology at the University of Potsdam.

Home
Print
Newsletter
More on this topic
Resistance to Pegida: "Intolerance must not be tolerated"Website of the Salaam-Shalom Initiative (mainly German)The perception of Islam as the enemy: When fear creeps inIsraeli–Palestinian dialogue in Germany: It is possible to work togetherMuslims in Germany: Blocked integrationInterview with Benjamin Stora: The history of relations between Jews and Muslims
Related Topics
Dialogue of Religions, Gaza War, Islam in Germany, Migration in Germany, Multiculturalism, Muslims in the West, Places of Dialogue
All Topics

On 15 June, the "Islamkolleg" in Osnabruck officially launched its new training programme for imams in German. The college is intended to prepare Islamic theologians for their ... END_OF_DOCUMENT_TOKEN_TO_BE_REPLACED

For centuries, the great classical Persian author Hafez has inspired German writers. Translations, adaptions and homages have been created in his wake, and the process continues ... END_OF_DOCUMENT_TOKEN_TO_BE_REPLACED

Business in the Moroccan city of Tangiers is booming due to its location at the nexus of global trade routes. But many locals are failing to reap the benefits. What they crave ... END_OF_DOCUMENT_TOKEN_TO_BE_REPLACED

Morocco and the European Union are at cross purposes when it comes to the Western Sahara. And, as Germany does not support Moroccan claims to the territory, a major conflict has ... END_OF_DOCUMENT_TOKEN_TO_BE_REPLACED

Jewish voices are much more diverse than the public often sees. Jewish men and women who oppose the injustice of Israeli occupation in the West Bank deserve our respect and ... END_OF_DOCUMENT_TOKEN_TO_BE_REPLACED

They’ve already got the Louvre; they’ll soon have a Guggenheim Museum as well – and now the Emirates have added literature to their quest for cultural supremacy in the Arab world ... END_OF_DOCUMENT_TOKEN_TO_BE_REPLACED

Comments for this article: Mauern abbauen

"Jews in Uganda" ??
Perhaps in one of the embassies??

END_OF_DOCUMENT_TOKEN_TO_BE_REPLACED
Social media
and networks
Subscribe to our
newsletter