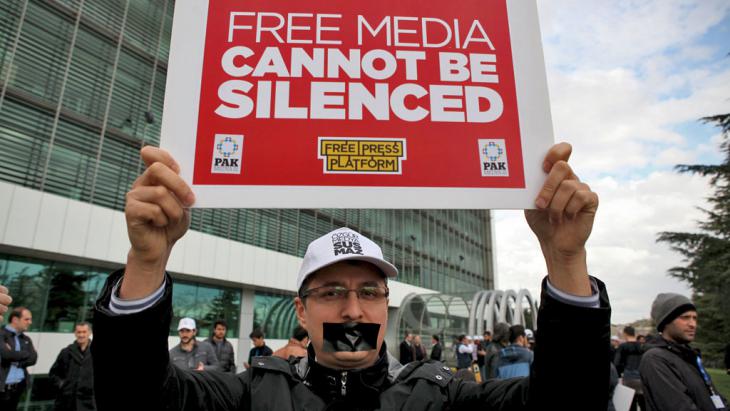 The crackdown on media critical of the Turkish president and his government continues unabated with the official seizure of the country′s bestselling ″Zaman″ newspaper. With international criticism muted, many government critics fear the lights are about to finally go out for independent media. By Dorian Jones in Istanbul

It took an Istanbul court a matter of hours to issue – with no explanation – a seizure order for Turkey′s most popular newspaper Zaman and appoint trustees to run it. The decision was made under Turkey′s anti-terror laws that allow any company or property to be seized merely on the suspicion of supporting terrorism.

″It was only a matter of time, it was expected but it is still heartbreaking and overwhelming,″ declared Sevgi Akarcesme, editor of Today′s Zaman, the publication's English sister paper, which was also seized. ″All authoritarian governments use the same tactics and tools. To silence opposition and media they cite terrorism charges: what this government is doing is no different.″

The Zaman papers are linked to the Islamic cleric Fethullah Gulen, one time ally of President Recep Tayyip Erdogan and his ruling AK party, but now a bitter rival. The rivalry went public in December 2013 in an explosive way when police and prosecutors exposed massive high-level corruption implicating family members of senior ministers and the president.

President Erdogan contends it was an attempted coup by followers of Gulen, who lives in self-imposed exile in the United States. ″We're not talking about media. This is a secret criminal network,″ wrote columnist Saadet Oruc in defence of Zaman′s seizure in the pro-government Sabah newspaper. Gulen followers have now been proscribed by state prosecutors as the Fethullah Terrorist Organisation (FETO). 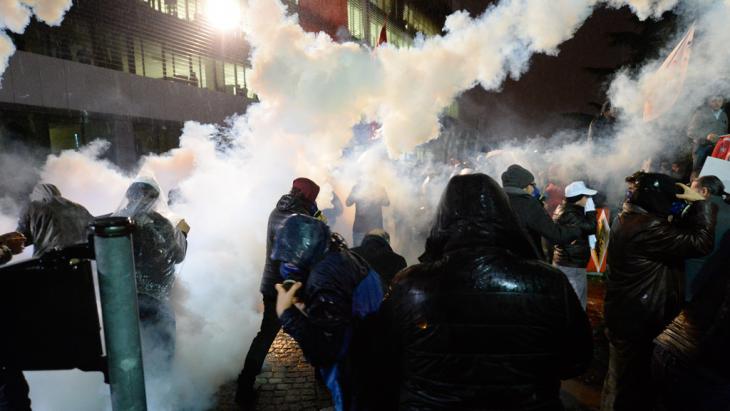 Erdogan's war on terror: the government insists the seizure is part of its battle against terrorism and anti-government conspiracies. Critics, such as Emma Sinclair-Webb, Turkey′s chief researcher with the US-based organisation Human Rights Watch, think otherwise: "Turkey is on a trajectory towards authoritarianism. Basically Erdogan and the AKP want to get rid of all the checks on the power of the executive″

The seizure of Zaman was predicted by a notorious informer within the president′s circles, known by the nom de guerre Fuat Avni. Avni tweeted just days before that Erdogan had personally demanded the paper′s seizure.

Prime Minister Ahmet Davutoglu hit back in a press conference, insisting it was a "legal, not political act,″ and adding ″it is out of the question for either me or any of my colleagues to interfere in this process.″ But his argument was somewhat undermined by the remarkable transformation of Zaman following its seizure.

Within 48 hours the paper had turned from ardent critic to supporter of the president, with a front page of Erdogan in praise of his pet project – a third bridge over the Bosphorus. Bugun newspaper and KanalTurk TV station, both with links to Gulen, underwent similar transformations following their seizure last October.

The speed and what is widely seen as the arbitrary nature of the seizure of Zaman, is also seen as sending a powerful message to the few remaining independent media. ″There are one or two independent media left,″ observes political scientist Cengiz Aktar of Istanbul′s Suleyman Sah University, ″but they are under intense pressure from the government, judging by the jailing of the editor-in-chief of Cumhuriyet. He spent 3 months in jail and the pressure has not let up since his release.″

Cumhuriyet′s editor Can Dundar and his Ankara bureau chief Erdem Gul face 35 years in jail for an article alleging the government were supplying weapons to radical Islamists in Syria. Their prosecutions followed the personal intervention of Erdogan, who warned they would be punished severely. Following those words, prosecutors duly indicted the journalists. 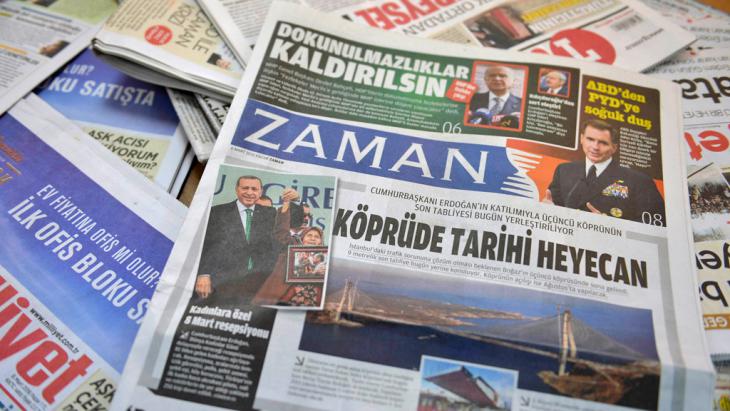 The prodigal returns: founded in 1986, the Turkish daily Zaman was originally pro- AKP and Recep Tayyip Erdogan. Its support waned following the collapse of a high-profile government corruption inquiry in December 2013. The Zaman takeover on 4 March 2016 was motivated by the newspaper's links with Fethullah Gulen′s Hizmet movement, accused by the government of attempting to establish a parallel state in Turkey

But in an increasingly rare act of independence, the Constitutional Court intervened and declared the case violated freedom of expression. The men were released from pre-trial detention, but their case is due to resume later this month. In a message that was widely seen to be aimed at the court, Erdogan defiantly declared about the Constitutional Court ruling, ″I don′t obey the decision. I don′t respect it either.″

Prosecutors are also increasingly using the law forbidding insults against the president to silence critical reporting. Nearly 2000 cases have been filed, with many aimed at the public, including school children. Journalists remain the main target, however. ″All the developments of the last months show that Turkey is on a trajectory towards authoritarianism,″ declared Emma Sinclair-Webb, Turkey′s chief researcher with the US-based organisation Human Rights Watch. ″Basically Erdogan and the AKP want to get rid of all the checks on the power of the executive.″

With much of mainstream media under government control or cowed by ″self censorship″, there has been an explosion in alternative media sites, along with social media. ″Mediascope″ has become a popular political discussion programme on the net, with many journalists and writers contributing who have lost favour with the government and thus disappeared from mainstream media. But even in cyberspace, there is increasingly little protection.

Through a combination of threats and cajoling, the government has successfully had more tweets removed than any other country. Next to China and Iran, Turkey has also had the most media sites banned. Political columnist Kadri Gursel, once a leading columnist for one of Turkey′ s leading newspaper Milliyet until a tweet he wrote upset the president, says the situation cannot continue, ″If it goes on, Turkey will be unsustainable, this is the logic of the dynamic. Turkey will descend into chaos.″ 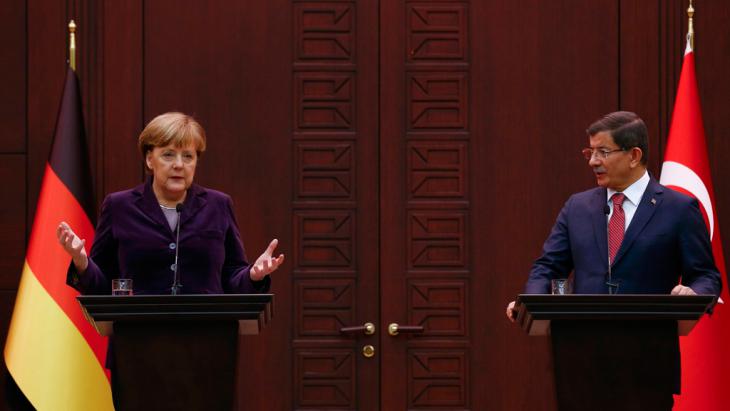 Realpolitik: questioned as to whether Turkey had successfully blackmailed Europe with the threat of unlimited migration of asylum seekers, Mrs. Merkel replied: “We are seeking a balance of interests… We have our interests, Turkey have theirs”

Whether at home or abroad, there are few checks to the government, which has been emboldened its victory in last November′s general election victory and its current pivotal role in stemming the refugee crisis. European Union leaders are desperately courting their Turkish counterparts. Turkey′s EU membership bid, once confined to the deep freeze, is back on the agenda, ″It′s just ridiculous to talk about the accession of such a country to the European Union, it′s a joke,″ an exasperated Aktar declares.

Such is the confidence of Ankara, the seizure of Zaman took place just days before a summit with EU leaders to discuss resolving the crisis. While the Council of Europe slammed the seizure, reaction from the EU was muted. ″I think the EU has betrayed its own principles,″ observed international relations expert Soli Ozel of Istanbul′s Kadir Has University grimly. ″The refugee crisis has basically shown that when expediency demands it, hypocrisy is the rule and commitment to principles is rather the exception. We are on our own and will have to take care of our own problems.″

In reference to the EU′s response, Akarcesme, now in hiding, declares, ″It′s a huge disappointment. I don′t know who is going to take the Europeans seriously now when they talk about values.″ For her and her colleagues, she admits the future is less than certain, ″All top editors are now at risk of being arbitrarily arrested.″

One year ago the Taliban returned to power, seizing Kabul; the U.S. and its allies made a panicked exit from the country. Of all the books written on the subject, four stand out ... END_OF_DOCUMENT_TOKEN_TO_BE_REPLACED

In "Iran. Die Freiheit ist weiblich", journalist Golineh Atai describes the dogged resistance of courageous Iranian women against the Islamic Republic and the mullahs who have ... END_OF_DOCUMENT_TOKEN_TO_BE_REPLACED

Unflattering terms were used at a German Football Association human rights congress aimed at "intensifying the discussion" ahead of the World Cup. One speaker in particular made ... END_OF_DOCUMENT_TOKEN_TO_BE_REPLACED

Egyptian authorities have Mada Masr in their sights once again after critical reporting. But the editor of the country's last independent news source is adamant they will continue ... END_OF_DOCUMENT_TOKEN_TO_BE_REPLACED

Like Christianity, Europe's history is one of migration. Both have strong roots in the Orient and in cultures thousands of years old. Cultural historian Bernhard Braun invites us ... END_OF_DOCUMENT_TOKEN_TO_BE_REPLACED

Comments for this article: No freedom. No press.

the same powers are ready to drop in USA

Our Presdient, as all our Presidents do, is following his orders.
He has given himself the raight to cause a nation-wide social media (possibly internet as well?) shut down, just as happened in Egypt, and parts of Syria at the same time.
In a nation full of "patriots", the brainwashed public goes along lock-step tever the media tells them.
That whistle-blowers are enemies of the state, and have to either go into hiding or be transmorgrified into something that will never talk back again is a telling sign.
(Ed Snowden and PFC Bradley Manning - now considers himself a female, wearing a long blonde wig.)
Daniel Ellsberg narrowly missed going to prison, Greg Palast was targetted for showing national infrastructure in his reporting (after Katrina at the temporary housing encampments) - when a follower told him - you can see the refineries perfectly on Google!
Glenn Greenwald lives in Brazil; Sibel Edmonds has an invisible guardian angel.
A bereaved mother protesting the war near fmr President Bush's ranch was called "the bitch in the ditch", but I never heard a peep about how untterly evil that was.
Cheney outted a CIA operative - the same man who got 5 deferments keeping him from
getting his malaria shots and going to Vietnam.
It is a very serious crime to do this. But among hundreds of other things, he got away with it. I've personally never shot anyone in the face - what would happen to me if I did that?
People that want real news of their own country's doings, do so on their own, from other country's presses. People here are either leaving or are deluding themselves that right will prevail.
Poland had Lech Walesa, a simple Electrician. Prague had Vaclav Havel, a poet and critic, who dared to speak out against what he saw as a corrupt nation, and did something about it.

I personally don't see the USA, with it's NDAA, Patriot Act, 'Homeland Security,Gitmo, etc having a Velvet Revolution anytime soon.

I am not ashamed to say I get on my knees and pray for mercy.

I forgot what I was originally going to say:
Nothing is Cached on Google anymore.

END_OF_DOCUMENT_TOKEN_TO_BE_REPLACED
Social media
and networks
Subscribe to our
newsletter