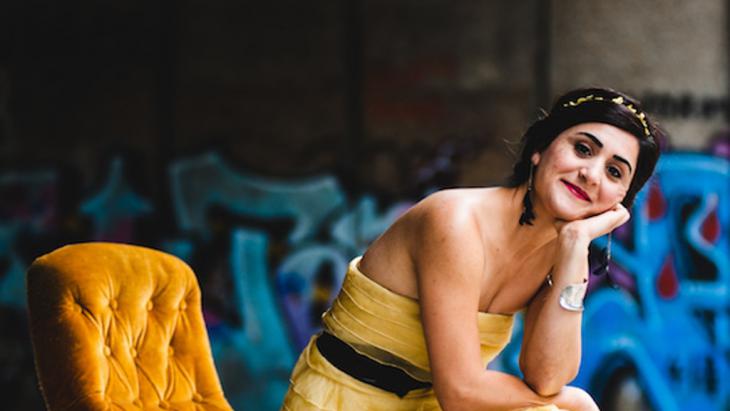 Tugging at your heartstrings

Cigdem Aslan's newest release, ″A Thousand Cranes″ on the Asphalt Tango Records label, harks back to a period when music and cultures came together in a celebration of life. By Richard Marcus

The Anatolia region of Turkey was once home to diverse ethnic and religious communities who coexisted peacefully. Out of this cross-cultural pollination grew a music, which while free of specific identity, drew upon a multitude of heritages. Greek, Turkish, Armenian, Jewish, Slavic, Arabic, Persian, Kurdish and many other traditions came together to produce an amazing amalgamation – one in which it's impossible to define a song's ethnic origin.

The thirteen songs on ″A Thousand Cranes″ reflect this history. A mixture of newly arranged traditional tracks and original material, listening to them is to remember a time when music helped people celebrate what they had in common and how their differences could embellish each other's lives. You can hear elements in various songs which not only represent the various people of the Asia Minor region, but those who came from further afield. Even more amazing is hearing characteristics of music now being played in Eastern and Western Europe.

In 1993 Algerian born Romani director Tony Gatlif made the movie ″Latcho Drom″ which depicted the migration of the Roma people from Rajasthan in Northern India, across Asia Minor, the Middle East, Eastern and finally Western Europe through music. In each stop along the way we heard how the music changed and evolved with its exposure to new influences.

Listening to Cigdem Aslan's new release one can't help but be forcibly reminded of how the Asia Minor region was not only influenced by those people who arrived from distant lands, but how the music changed before being carried on the great trade routes of the past to Europe.

From Aslan's vocal mannerisms on certain pieces, the rhythms played by Vasilis Sarikis′ percussion, to the sounds of Michalis Kouloumis's violins, you can't help notice similarities to the music of not just contemporary Romani bands, but Klezmer and Middle Eastern music as well. However, while the album's antecedents are an integral part of its appeal, they are soon forgotten through the pleasure of listening to what the band have created in the moment.

With Colin Somervell on double bass, Nikolaos Baimpas on kanun, santouri and mandolins rounding out the core band and guests augmenting the sound on various tracks, Aslan and company have created an incredible mix of songs which will alternatively tug at your heart strings or make you laugh out loud in amazement. With the lyrics being sung in a mixture of Greek and Turkish (an assumption based on the fact the original lyrics are transcribed in a mixture of Cyrillic and Roman letters with English translations beside them) one has to rely on the music and Aslan's ability to transmit emotions with her voice alone to gain an understanding of a song's content.

Thankfully for non Turkish/Greek speakers, Aslan is a remarkable vocalist. Listen to a song like "Cile Bulbulum" (Sing My Nightingale) and you'll be amazed at what she can convey with seemingly simple lyrics. "Sing my nightingale/Sing with me/Let the rose hear your voice/Sing my nightingale, sing" is the extent of the opening verse. However what Aslan does with them manages to communicate a range of emotions that will leave you breathless. It's as if her life depends on hearing this person sing with the nightingales. She creates something close to a sound collage with the four words "Sing my nightingale, sing" at the end of the verse which pierce the heart.

However for a real example of her vocal prowess listen to "Lingo Lingo Siseler". Now this is one of those songs which loses a lot in translation. For the lyric "Siseler, lingo, lingo, siseler" are the onomatopoeic sound of bottles clinking together – as if you're drinking a lot and getting very drunk. It really doesn't sound quite the same in translation – "bottles, lingo lingo bottles".  As Aslan repeats the chorus above she becomes more and more abandoned and her voice climbs in a kind of hiccoughing crescendo. It might sound humorous, but at the same time we realize it's also the sound of a voice being overcome with emotion. 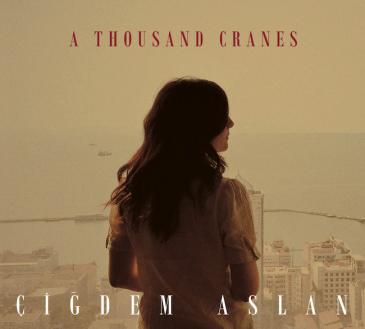 A multitude of heritages: "Greek, Turkish, Armenian, Jewish, Slavic, Arabic, Persian, Kurdish and many other traditions came together to produce an amazing amalgamation – the thirteen songs on ″A Thousand Cranes″ reflect this history," writes Marcus

The crane as symbol of peace

The cranes referenced in the title of the album are more than just a passing fancy. In many cultures cranes carry teachings, culture and tradition. But they are also symbols representing the sadness of exile, missing one's homeland and above all peace. In the case of ″A Thousand Cranes″ the music not only reflects those who have left their homes behind but carried their culture with them, it also shows how those various cultures can come together in harmony to create something new and beautiful without diminishing the original.

Cigdem Aslan and company have created a marvellous collection of music which not only celebrates the rich cultural heritage of Asia Minor's past, but builds upon it. They have not simply recreated songs as they imagine they might have been performed literally centuries ago, but they have used those traditions to create something both musically and culturally inspiring.

Sometimes the past offers harsh lessons in how we shouldn't treat one and other. On this occasion history shows us one of the times when humans were able to celebrate their diversity and create something wonderful as a result. In these divisive days the album ″A Thousand Cranes″ contains valuable lessons for us all. Hopefully everybody will be able to hear what the message implied in the music.

According to the latest Reuters tally, more than 2.54 million people are now reported to have been infected by the novel coronavirus globally and 177,004 have died. As Muslims ... END_OF_DOCUMENT_TOKEN_TO_BE_REPLACED

Ramadan begins this week even as the coronavirus pandemic up-ends life around the world. The crisis is forcing Muslims to re-think traditions and find new approaches to one of ... END_OF_DOCUMENT_TOKEN_TO_BE_REPLACED

Exploiting the coronavirus emergency, Algeria’s ruling classes have ramped up their repressive campaign against the protest movement, opposition and free media. By Sofian Philip ... END_OF_DOCUMENT_TOKEN_TO_BE_REPLACED

Around the Islamic world, lockdowns and curfews are being extended and religious ceremonies are being cancelled outright in the hope of slowing the spread of COVID-19. Here’s the ... END_OF_DOCUMENT_TOKEN_TO_BE_REPLACED

Several African countries have opened diplomatic missions to Morocco in Western Sahara, a disputed area occupied by Rabat. This has been exacerbating the conflict in an already ... END_OF_DOCUMENT_TOKEN_TO_BE_REPLACED

The French-Algerian poet Habib Tengour delves deep into the Persian Middle Ages, describing a legendary alliance of men that creates a fateful bond between a religious terrorist, ... END_OF_DOCUMENT_TOKEN_TO_BE_REPLACED

Comments for this article: Tugging at your heartstrings

My great-grandfather recounts in his text about Robert College the migration of Roma from Thrakia to Anatolia via the Bosphorus: One of the pathways over the Bosporus was close to today's Rumeli Hissar Bridge:

"They have an age-old history, those yellow lines running through the heather. Because down there, where the promontory of the ‘Hermes’ cuts into the stream of the Bosporus, already the original inhabitants found an easy passage over the strait, which is most narrow here. I assume that the passage was named first of all here ‘ford of the oxen - Bosporus’. When spring comes into the countryside or when the summer makes room for the rainy season, still today the nomadic gypsies with all their colourful belongings roam past, to cross the strait. From the packsaddle of the sumpter-mule, a crow is carking joyfully and the gypsy girls swarm out brash and challenging into the terrain.
For the ‘children of the path’ the blossoming valleys of Asia open over there, amongst the forested hills of Bithynia. …" (Friedrich Schrader, Robert College, Nord und Süd, Nov. 1919, pp. 165-169) "Nord und Süd" was a cultural magazine founded and edited by German-Jewish publishers Paul Lindau and Ludwig Stein)

END_OF_DOCUMENT_TOKEN_TO_BE_REPLACED
Social media
and networks
Subscribe to our
newsletter