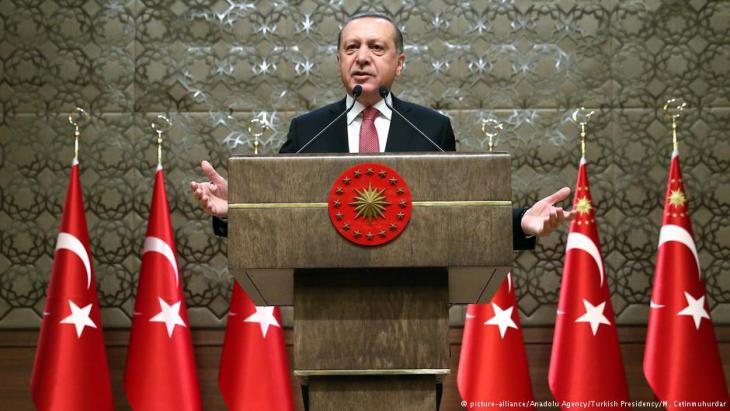 In the past few months Turkish President Erdogan has repeatedly called the borders of Turkey into question and implicitly laid claim to neighbouring territories. While such statements are mainly aimed at his own citizens, the neighbouring states are getting nervous, particularly now that Erdogan has dispatched troops to Syria and Iraq. By Ulrich von Schwerin

When in late September Turkish President Recep Tayyip Erdogan criticised the Treaty of Lausanne, which established the borders of modern Turkey, the neighbouring states reacted with alarm. "Some people have tried to deceive us by presenting the Treaty of Lausanne as a victory," said Erdogan in a speech in Ankara. "But the truth is that in Lausanne we gave away islands that are so close you can shout across to them," he continued, referring to the Greek Aegean islands off the Turkish coast. In response, Greece warned that it would be unwise to challenge the 1923 treaty, as it represents "a reality of the civilised world" that no one can ignore.

Despite the angry reaction of the Greeks, Erdogan brought up the same topic just three weeks later – this time with regard to Mosul in Iraq. He asserted that the Treaty of Lausanne, in which Turkey agreed after the end of the First World War to cede all Ottoman Empire territories the outside of today's republic, had "reduced our country in 1914 by 2.5 million square kilometres, to an area of 780,000 square kilometres". Things would have to change, he remarked and Turkey must not "forget the age-old memory of our lands."

Is Turkey seriously planning to assert a claim to the former Ottoman territories? While Erdogan's remarks prompted concern among Turkey's neighbours, within the country itself they led to heated objections from the Republican People's Party (CHP), which sees itself as guardian of the legacy of the founder of the republic, Mustafa Kemal Ataturk. Lausanne is a "founding document" of the Turkish Republic, remarked the CHP MP Gulsun Bilgehan, granddaughter of Ataturk's close associate Ismet Inonu, who negotiated the treaty. Erdogan should "read a real history book", she quipped.

The Treaty of Lausanne is generally considered a great success for Turkey, as it revised the 1919 Treaty of Sevres, which had envisaged parcelling out much of Anatolia among Greece, France, Italy and Armenia after the defeat of the Ottoman Empire in the First World War.  After the Turkish nationalists' successful war of independence under the leadership of Ataturk, the major European powers meeting in Lausanne were then forced to acknowledge the existence of the modern Turkish Republic. 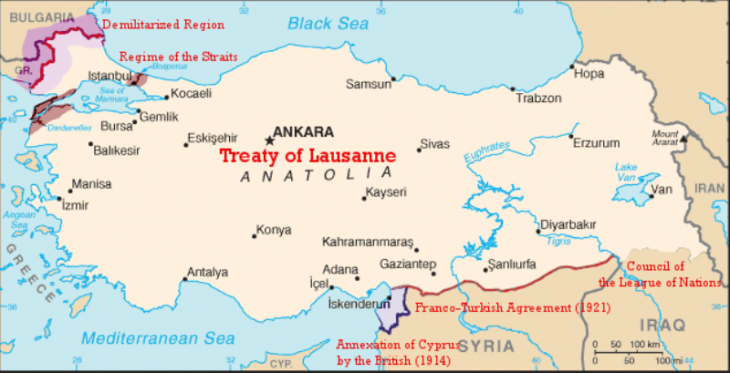 The Treaty of Lausanne – "a disgrace to the nation": Turkey must not "forget the age-old memory of our lands," says Erdogan. The Treaty of Lausanne was signed after the First World War by the victorious allies and the Turkish leadership under the Republic′s founder Mustafa Kemal Ataturk. It established Turkey′s present-day borders both in the east and west of the country. Several islands in the Aegean were transferred to Greek ownership during the process

Erdogan's references to the previous size of the Ottoman Empire are not new. Ever since his AKP Party took power in 2002, he has endeavoured to cast the memory of the empire in a more positive light. His long-time foreign minister Ahmet Davutoglu, who, until being deposed as prime minister last May, had a considerable influence on the ideology of the AKP, made former Ottoman countries such as Iraq and Syria a focus of Turkish foreign policy and tried to position Turkey as a regional leader.

Many observers have commented that Erdogan's recent irredentist statements have been mainly domestically motivated – but at the same time they accuse him of not considering the possible repercussions for foreign policy. "Erdogan says whatever pops into his head, but foreign policy is a field that requires a long-term vision and meticulous planning," commented former Turkish ambassador Suha Umar in the Internet magazine Al-Monitor.  "His biggest mistake is to use foreign policy for his domestic political agenda."

Columnist Semih Idiz wrote in Al-Monitor that Erdogan, with his "often passionate and impulsive remarks to an audience that is predominantly Muslim and Sunni," frequently forgets "the consequences of his words and the difficulties they will cause for Turkey."

Neighbouring states are also concerned about Erdogan's statements because the President didn't stop at pure rhetoric, but also showed determination to take action against any threats to Turkish security coming from abroad. Turkey, for example, intervened in northern Syria in late August to push back the jihadists of the Islamic State (IS) as well as the Kurdish People's Protection Units (YPG) from the Turkish border, not to mention reinforcing its troops in northern Iraq prior to the offensive against the IS stronghold in Mosul.

This move triggered angry reactions in parliament in Baghdad, prompting Prime Minister Haidar Al-Abadi to demand the withdrawal of Turkish troops from Iraq. In one of his typical tirades, Erdogan responded by urging Al-Abadi "to know his place," remarking that he was not on the same "level" as himself. Turkey not only refused to withdraw the troops, but also demanded that they participate in the upcoming offensive in Mosul, where they presented themselves as a force protecting Sunnis against Shia militias from southern Iraq. 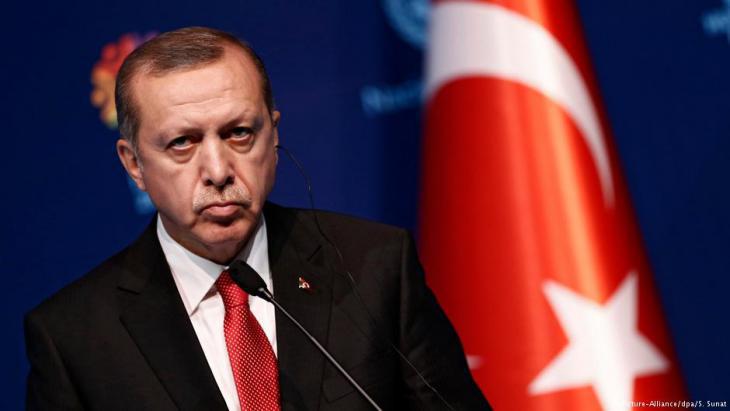 Wave of indignation: Recep Tayyip Erdogan′s comments about the border line in the Aegean outraged Greek politicians. Erdogan had questioned the legitimacy of the Treaty of Lausanne which was signed in 1923 and which forms the basis for all Turkey′s relations with its neighbouring countries. "Lausanne is not irrefutable, it′s not a sacred text," argued the Turkish president

On the one hand, the policy now being practiced by the Turkish government is driven by the ambition to expand the country's sphere of influence in the region and hence lead Turkey to new greatness, but it is also motivated by fear: fear of the jihadists who have been carrying out painful attacks in the country and fear that the Kurdistan Workers' Party (PKK) will extend the battle from its retreat positions in northern Iraq and the Kurdish cantons in Syria to Turkey itself. In recent weeks, anxiety has seemed to win out over ambition.

In a speech he gave on 22 December, Erdogan mentioned again "the sorrow for what we lost in Lausanne," but he above all warned of a renewed division of Turkey. "If we are not careful in these stern times, when attempts are being made to restructure the world and our region, we will find ourselves confronted with conditions like those in Sevres," said the president. "Turkey is witnessing its biggest struggle since the war of independence," he warned. A struggle for "a united nation, a united fatherland, a united state."

Policy expert Fuat Keyman from the Istanbul Policy Centre points out that "in the last two weeks Erdogan has warned three times in his speeches of a repetition of the Treaty of Sevres." The warning against a renewed division of Turkey reflects the government's sense of being subjected to an "existential threat". Turkey is currently not only facing attacks by both the PKK and IS but also has to deal with the Gulen movement, which the government blames for the failed military coup of 15 July.

Given this mood of menace, Erdogan is once again demonstrating that he can be pragmatic if necessary. Having mustered the strength this summer to apologise to Moscow for the shooting down of a Russian fighter plane on the Turkish-Syrian border in November 2015, he has now initiated a rapprochement with Iraq.

Shortly before the end of the year, Erdogan phoned Al-Abadi, whom he had told only a few weeks before that he was not on the same "level", to discuss the joint fight against terrorism. And during a visit to Baghdad in early January, Turkish Prime Minister Binali Yildirim assured the Iraqis that the Turkish troop presence in Mosul was not directed against Iraq's sovereignty, but serves solely to strengthen the fight against the jihadists.

Turkey's parliamentary and presidential elections are scheduled for June 2023. But they are already casting a shadow. While the opposition is calling for early elections, ... END_OF_DOCUMENT_TOKEN_TO_BE_REPLACED

By stage-managing his re-election in a poll widely dismissed as a farce, Syria's President Bashar al-Assad has killed two birds with one stone: he has forced his compatriots to ... END_OF_DOCUMENT_TOKEN_TO_BE_REPLACED

Recep Tayyip Erdogan, disappointed by the European Union’s reluctance to integrate Turkey into its ranks, has re-directed his country’s diplomacy toward the Maghreb and Africa to ... END_OF_DOCUMENT_TOKEN_TO_BE_REPLACED

Having taken control of the traditional media, Turkish President Erdogan is now extending his reach to the social networks. A new law has been passed to rein in major digital ... END_OF_DOCUMENT_TOKEN_TO_BE_REPLACED

Although a unity government was formed in Libya in March 2021, tensions and possible crises between the political actors are already emerging. What problems does the country face ... END_OF_DOCUMENT_TOKEN_TO_BE_REPLACED

In Islamic mysticism, Ramadan is more than just a period of prescribed abstinence, signifying an opportunity for inner contemplation. Marian Brehmer explores the spiritual ... END_OF_DOCUMENT_TOKEN_TO_BE_REPLACED

As much as I enjoy the content of many of your articles, I have noticed that in some formats they do not carry a date of first publication. I just read the one above, "Neo-ottoman Rumblings," for example, and I do not see the date of its publication here on this page, nor on the link before I clicked on it.

Many of us only want to read the newest info, and expect to see such a date so we can maximize our reading time.

[Have passed your comment to the system administrators. Thank you. Editor]

END_OF_DOCUMENT_TOKEN_TO_BE_REPLACED
Social media
and networks
Subscribe to our
newsletter