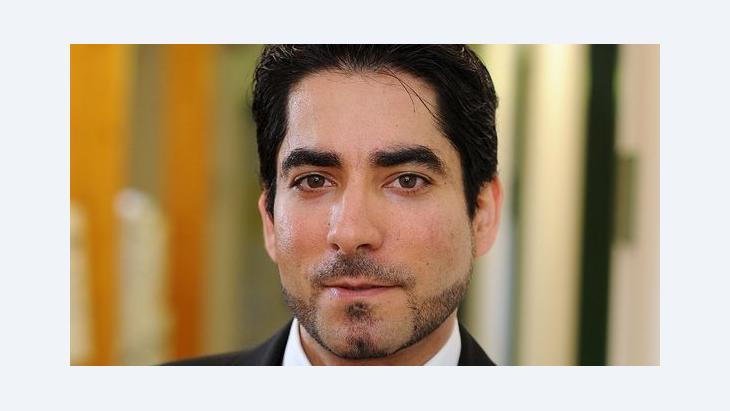 The Koran has thus far been subjected to erroneous interpretation, says Mouhanad Khorchide, professor of Islamic Religious Education at the University of Munster. Khorchide is calling for an emancipation of the faith. Interview by Arnfrid Schenk and Martin Spiewak

Professor Khorchide, what was your reaction to the recent controversial Mohammed film on YouTube?

Mouhanad Khorchide: I thought it was tedious and tasteless. I didn't recognise the Prophet Mohammed as he was portrayed in the film so I didn't feel it was directed at me as a Muslim.

Many Muslims find it difficult to adopt this attitude, what is your advice to them?

Khorchide: Ignore it, don't allow yourselves to be provoked. The film is a trap laid specifically to provoke, and Muslims repeatedly fall into this trap.

Why do Muslims react in this way to insults aimed at the Prophet? After all, unlike Jesus he doesn't have divine status.

Khorchide: The problem lies elsewhere. On such occasions, Muslims vent their pent-up anger. The video itself isn't the cause of the agitation, just the trigger. The Islamic collective memory is still etched by crusades, the colonial era and what is perceived as an unjust Middle East policy, as well as the wars in Iraq and Afghanistan.

You have just written a new book in which you describe the Koran as a love letter from God to humanity. How did you arrive at this interpretation? The Koran would normally be described as a powerful book – and in the West also as a dangerous one.

Khorchide: The question is: which image of God are we talking about? Many Muslims assume that their God wants to be glorified, that he despatches orders and makes sure these orders are obeyed. Those who obey are rewarded, and those who don't are punished. But this is a perception of God similar to that of a tribal leader who cannot be challenged. This is why many Muslims view the Koran as a rulebook.

There is much talk of hell in the Koran. How does this fit in with the concept of mercy?

Khorchide: Hell is nothing other than the confrontation with one's own transgressions. It's not a punishment that comes from without. As a famous mystic once said: "I'd like to extinguish the hellfire and set paradise alight, so that people don't act out of fear of hell or hope for paradise." We humans should strive for something higher, the closeness and companionship of God. However, traditional theology has taken a less metaphorical view of the images of paradise and hell, and instead literally described them as material spaces with material pleasures and punishments. But if you're only doing something good because you fear punishment or hope for reward, then that's not enough.

But this literal interpretation appears to be widespread, particularly among young Muslims in Germany.

Khorchide: Not just in Germany, and not just among youngsters, unfortunately. This is a highly simplified faith that presents God as nothing more than a bookkeeper or a judge, who calculates how often I've prayed. I can understand those who want to keep a kind of religious to-do list. But it's a pity. This kind of approach doesn't allow faith to move on from a highly elementary stage. It's more difficult to say: I would like to do something good for the sake of goodness; or I strive for internal perfection that finds its expression in good character traits and actions.

But this obedient take on Islam, as preached by radical Salafists, really seems to resonate with young people in Germany right now. Why?

Khorchide: These youngsters feel rootless, sidelined. They are searching for an identity and, above all, for something that will distinguish them. Many young people aren't hearing a "you belong", but rather a "we Germans – you Muslims". The Salafists provide them with the validation they seek. An identity that flies in the face of mainstream society. They pick out elements of Islam that accentuate the differences, such as a beard or clothing that's exactly the same length as the Prophet's. But this is an external identity without a core.

You train Islamic religious teachers. How do German Muslims react to your views?

Khorchide: The young ones say: that all sounds very nice, why did no one tell us about this before? I can identify more with this merciful God, they say. And even though there are also some reservations, my views have also met with appreciation from associations perceived as conservative – although they are actually quite heterogeneous. I try to provide theological explanations for everything, using Islam as my basis. I sustain my arguments with the Koran. The 220 pages of my book contain references to 400 passages of the Koran in order to show that this is not just my personal view.

And what about reactions to your work in the Arab world, is there some understanding there too?

Khorchide: In the summer, I went to Al-Azhar University in Cairo, the most important Sunni authority in Islam. After my lecture, the older scholars were reticent and didn't say anything. But the undergraduates and doctorate students came up to me and asked if they could study in Munster or write their doctorates there. The young ones are looking for something new. 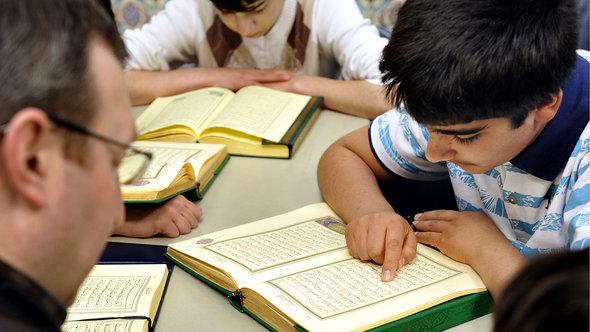 Khorchide says that because of the difficult archaic language in the Koran, "most Muslims don't concern themselves with the true essence of the Koran", which means that they base their faith on what they are told, "harking back to statements made by theologians in the ninth and tenth centuries"

Will your book also be translated into Arabic?

Khorchide: Yes, but I'll tailor it slightly to the Arab mentality.

Take the sting out of it a little?

Khorchide: I suppose you could put it like that. But the main message will be the same: that God is a God of mercy, that Islam is a religion of mercy. Any other interpretation of Islam is not Islam.

Why is it that most Muslims have a completely different understanding of Islam? They're reading the same Koran, after all.

Khorchide: The Koran was written in the classical Arabic of the seventh century. It's therefore very difficult for non-Arabs to understand. When Arabs read it, they perhaps understand 40 per cent as far as the language is concerned. But even greater difficulties arise in the theological reading of the verses. Most Muslims don't concern themselves with the true essence of the Koran. That's why we Muslims often base our faith on what we are told. We are harking back to statements made by theologians in the ninth and tenth centuries.

In your book you write that when viewed as a legal system, Sharia is a contradiction of Islam. Why?

Khorchide: For the very reason that it reduces Islam to a legal system. Some Muslims even go as far as to say that if you're not in favour of physical punishment, then you're not a Muslim. All the discussion surrounding Sharia means that it's only about whether or not you follow rules.

Your parents are Palestinian, but you went to school in ultra-conservative Saudi Arabia and studied in Austria; what impact has this had on your religious socialisation?

Khorchide: Saudi scholars claim that their nation is pure, true Islam's only home. But this Salafist mindset has reduced the faith to nothing more than a façade. A man is a sinner if he shaves off his beard; a woman is a sinner if she doesn't wear a headscarf. In mosques, I saw how only those with the longest beards were allowed to serve as imams and lead the prayers. What's the point of that? As a Palestinian in Saudi Arabia, I wasn't allowed to study or get any medical insurance, but in Austria, a non-Islamic nation, none of this was a problem. I started asking questions, I wanted to get to the core of this religion. 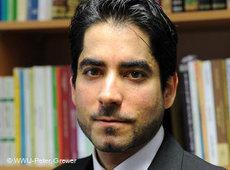 The crux of Khorchide's book is that God is a God of mercy, and Islam is a religion of mercy: "Any other interpretation of Islam is not Islam"

​​You also criticise those who are described as liberal Muslims. Why? Are you not singing from the same song sheet?

Khorchide: They also reduce Islam in a similar way to the fundamentalists. The fundamentalists hollow it out, by focussing on the façade, on outward features. The liberals provide a radical response by dispensing with almost all outward features and rituals and limiting it to the shahada, the declaration of belief. That's not enough. The shahada must find its expression in life.

So what needs to happen for your understanding of Islam is to find wider acceptance?

Khorchide: There must be a discourse, and a discourse needs institutions, it must be taught, students must perpetuate its message. I think Islamic theology here in Germany represents a good opportunity because we have much greater freedom of movement. But it will take one or two generations.

Mouhanad Khorchide has been Professor of Islamic Religious Education at the University of Munster since July 2010. His new book Islam ist Barmherzigkeit – Grundzüge einer modernen Religion (Islam is Mercy – Essential Traits of a Modern Religion) was published by Herder in October.

Elke Muller is fighting for her daughter Anna, who fell in love with a young Afghan and converted to Islam. The mother spoke to Esther Felden about feeling alienated and her fear ... END_OF_DOCUMENT_TOKEN_TO_BE_REPLACED

As historian Wiiliam Dalrymple writes in his essay, scholars are only now beginning to realise the extent to which the Mughal emperors adopted what most would assume to be ... END_OF_DOCUMENT_TOKEN_TO_BE_REPLACED

There's not much to see yet, but it's clear that Cologne will be home to a new museum dedicated to migration. The government will provide funding to see the Central Museum of ... END_OF_DOCUMENT_TOKEN_TO_BE_REPLACED

Unable to travel to Munich to attend the presentation ceremony for his Geschwister-Scholl Prize, writer Ahmet Altan penned a message against hatred and nationalism from his prison ... END_OF_DOCUMENT_TOKEN_TO_BE_REPLACED

Comments for this article: ''God Is Not A Dictator''

God is Not a Dictator - Could Not Agree More

Can not agree more this this insightful viewpoint and article.

My wife and I, after raising 5 children through a variety of American Mosques and schools, realized the lack of substance and poisonous views that were being spread in the minds of the young. As a result, we founded and ran our own Sunday school for 8 years to counter this anathema in our religion. Our objectives were to create "thinking" Muslims by giving them the following: 1. An American Muslim Identify, 2. Core Islamic knowledge, and 3. Application in every day life. We did not allow our teachers to use the word "Haram" unless they had read it in the Quran while studying a surah, and we did not allow our teachers to speak of hellfire or damnation, but rather to emphasize Allah's Love and Mercy. None of our morning lectures or lesson plans including any politics whatsoever and we did not distinguish Muslims by national identify or sect. We also educated and helped de-program our young students from a variety of social norms that were not helpful. For example, dropping the use of words that were not well understood and were being overused such as "haram" to chastise someone or "Wallah" to swear oath. These subtle yet important lessons helped calibrate our students toward a newfound respect for their religion, a filter for identifying man-made dogma, and a strong and loving bond with their creator.

As a result, our school was highly successful and we were fortunate to have over 700 students pass through our classes. We would like to see more schools and institutions foster this viewpoint and approach.

Enthusiasm and desire can break through all difficulties