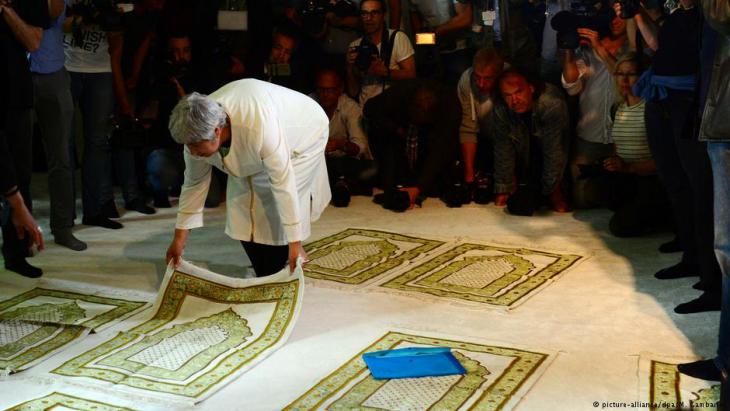 The hostile reactions to the opening of a "liberal mosque" in Berlin are no great surprise. They are not, however, evidence that Islam is incapable of reform, says Loay Mudhoon

It was described as a "world event in the heart of Berlin". And judging by the overwhelming response both at home and abroad to the opening of the determinedly "liberal mosque" in a Protestant church in Berlin's Moabit district, this assessment is justified.

Media representatives from all over the world wanted to be present when Seyran Ates, a German-Turkish lawyer and women's rights activist, presented her reform project to the public: an integrative mosque for everyone. The Ibn Rushd-Goethe Mosque welcomes all Muslims, irrespective of denomination and sexual orientation.

Furthermore, this house of worship – the only one of its kind in Germany – has explicitly abolished the segregation of the sexes during prayer. Men and women can pray alongside one another. A man and a woman led the first Friday prayers together. And more importantly, given the heated Islam debates in Germany, the "female imam" did not wear a headscarf.

Liberal Islam for the non-Muslim majority?

The fact that reactions from predominantly Muslim countries to the opening of the Ibn Rushd-Goethe Mosque have been both hostile and particularly forceful is not really any great surprise – not, at least, if one is aware of the repressive realities in these countries. 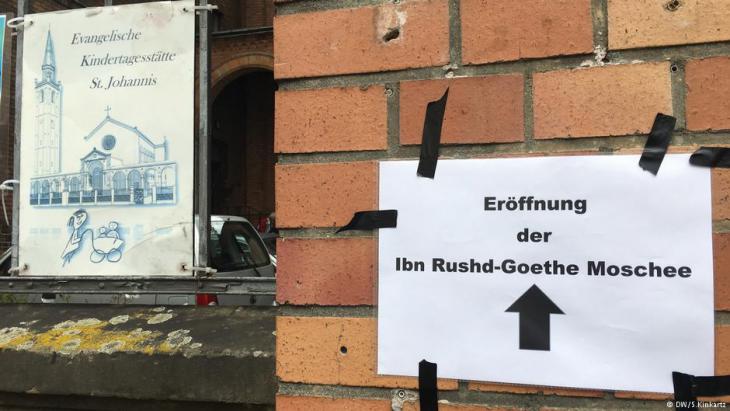 Mosque rents space from a church: "the opening of the Ibn Rushd-Goethe Mosque is doubtless a courageous and remarkable step. For the ongoing development of Islam in Germany, however, it would be better, in the spirit of our liberal-democratic constitution, to respect the real-life plurality of Muslims and their different understandings of what Islam is," writes Mudhoon

This is true, too, of Egypt and Turkey, where protests against the Berlin mosque were particularly fierce. The religious authorities in both of these countries have been muzzled politically.

However, what's more interesting than the predictable reactions from Muslim countries abroad are the reactions in Germany itself. These were uniformly positive. Almost all the media celebrated the new institution as a place of open-minded, emancipated Islam. As expected, conservative circles as well as people and interest groups who are vocally critical of Islam see this kind of mosque as an alternative to the mosques of orthodox Islamic groups. In their view, "this Islam" is the only one that's suited to Germany.

This fervent enthusiasm in the media and political realm cannot, however, gloss over two fundamental problems.

Firstly: so-called "liberal Islam" consists of individuals, public personalities; it has no structure to speak of. In Germany there are now a number of civil society initiatives by liberal Muslims, but their level of organisation is still low, as is their ability to connect with the conservative Muslim mainstream.

Secondly: so far, those who represent liberal Islam are still very vague as far as content is concerned. They usually define themselves by their rejection of conservative Islam. And that's just too little substance to have a big impact.

Respecting the plurality of Muslims

No question about it: the opening of the Ibn Rushd-Goethe Mosque is a courageous and remarkable step. But outside Germany liberal mosques like these are not a new phenomenon. Similar mosque projects have already existed for a long time in Britain and the United States.

In addition, the heterogeneous supporters of liberal Islam should have explained – well before the mosque opened – on what Islamic principles their liberal understanding of the religion is based. They should, for example, have held a pertinent debate on the role of Sharia in a secular constitutional state. This would certainly have been helpful in terms of drawing a distinction between acceptable and unacceptable aspects of Sharia.

In other words, just as Turkey's state authority for religious affairs, Diyanet, cites the "tenets of the Islamic faith" as its reference point, the liberal Muslims should also have justified their efforts with reference to genuine Islamic sources.

State-controlled Islam has no credibility

Neither the meagre response to the Muslim peace and anti-terrorism demonstration in Cologne nor the hostile reactions to the opening of the mosque in Berlin can be taken as evidence that Islam is incapable of reform. We are, after all, seeing efforts by Muslim activists all around the world who are striving for reform. The battle over who has the prerogative of interpreting and defining "Islam" is being fought almost everywhere, with a vengeance.

In any case, politicians would be well advised not to privilege particular versions of Islam – neither liberal nor conservative. An Islam protected or even controlled by the state would have no credibility and would be unworthy of a pluralist democracy.

For the ongoing development of Islam in Germany it would therefore be better, in the spirit of our liberal-democratic constitution, to respect the real-life plurality of Muslims and their different understandings of what Islam is – and continue to promote its institutional naturalisation.

Her grandparents are Jews – born in Tunisia and Algeria. Director Cleo Cohen has now broken the silence about this with a very personal debut. By Nadine Wojcik END_OF_DOCUMENT_TOKEN_TO_BE_REPLACED

Life imprisonment for crimes against humanity: that was the sentence handed down to Anwar Raslan in the world's first trial of a member of the Syrian torture system. Matthias von ... END_OF_DOCUMENT_TOKEN_TO_BE_REPLACED

Every year in December, the team at Qantara.de takes a look back at the articles that proved most popular with our readers. This year is no different. Here is a run-down of the ... END_OF_DOCUMENT_TOKEN_TO_BE_REPLACED

With his new album, "A Voice Keeps Calling Me", the Persian santur player Kioomars Musayyebi is building bridges from Iran across the Arab world to European early music. By Stefan ... END_OF_DOCUMENT_TOKEN_TO_BE_REPLACED

Former lawyer Said Haider has invented a chatbot for those seeking advice on anti-discrimination issues – Meta is the first chatbot of its kind in the world. In conversation with ... END_OF_DOCUMENT_TOKEN_TO_BE_REPLACED

Benjamin Idriz, imam of the mosque in Penzberg near Munich, is one of the most prominent representatives of Islam in Germany. He sees his role as building bridges to mainstream ... END_OF_DOCUMENT_TOKEN_TO_BE_REPLACED

Comments for this article: Liberal Islam is a chimaera

Unless this evolution takes

Unless this evolution takes place in Islamic countries, especially developed and run by Muslim religious authorities (i. e. an inherent indigenous development), it will cause conflict and in long term crisis, especially, when you have the goal to make in Europe-wide. Unless you want to produce a European Islam. This will lead to formation of a new sect in Islam at best.

END_OF_DOCUMENT_TOKEN_TO_BE_REPLACED
Social media
and networks
Subscribe to our
newsletter