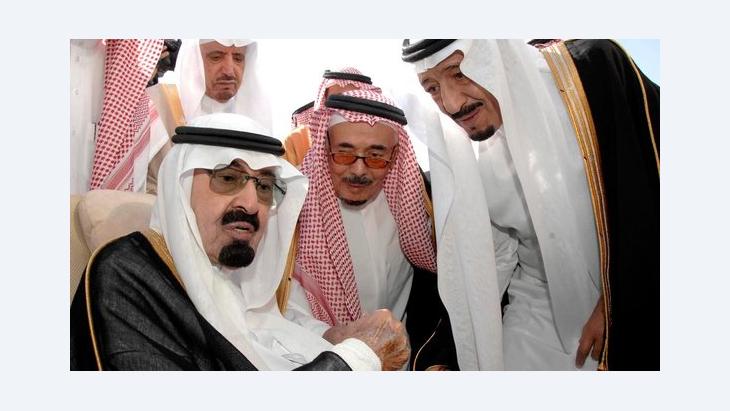 ﻿Saudi Arabia's political maxim is stability for the petrodollar monarchy. Everything else is of secondary importance for the powers that be in Riyadh. But as long as Wahhabism remains the absolute ideology of state, there can be no real unity or real stability in the Saudi Arabian nation. By Loay Mudhoon

﻿An incident at the Summit of the Non-Aligned Movement in Tehran in September must have confirmed the Saudis' worst fears. Iranian state television broadcast a faulty translation of the speech made by the Egyptian president, Mohammed Mursi, who denounced the Syrian government as an "oppressive regime". The TV version of his speech referred to Bahrain, not Syria. Entire parts of sentences were manipulated.

Iran and Saudi Arabia are competing for hegemony in the Gulf region. King Abdullah and the Saudi leadership fear nothing more than Iranian dominance, and at worst one that is reinforced by nuclear arms. In the Saudi view, Iran is threatening the kingdom's absolute monarchy. That fear is rooted in the fact that Saudi Arabia needs foreign powers for protection.

For seven decades, the USA and Saudi Arabia have been strategic partners. The Saudis control a third of global oil reserves, and they ensure supply to the USA and other countries. In return, Washington guarantees military security. In Saudi eyes, however, US engagement in Iraq was a failure, not least because the influence of the Shia population and its clerics, many of whom have studied in Iran, has increased considerably there. The Saudis were also concerned by the overthrow of US-ally Hosni Mubarak in Egypt. As a result, they are now doing what they can in cooperation with their Sunni allies to stem the influence of Iran's Shia theocracy.

If there is one categorical imperative in Saudi Arabia's foreign and security policy it is that priority must be given to whatever serves the monarchy's domestic stability – both at home and abroad. This regime is driven by fear of its own swift collapse.

Indeed, the legitimacy of the Saudi system cannot be taken for granted. Ever since the eighteenth century, this legitimacy has been based on the royal family's alliance with Wahhabi scholars, who preach a puritanical and fundamentalist version of Sunni Islam. There are no civil rights in the Western sense, and the Shia minority in Saudi Arabia suffers systematic discrimination. It is considered to be Tehran's "fifth column" in Saudi Arabia. 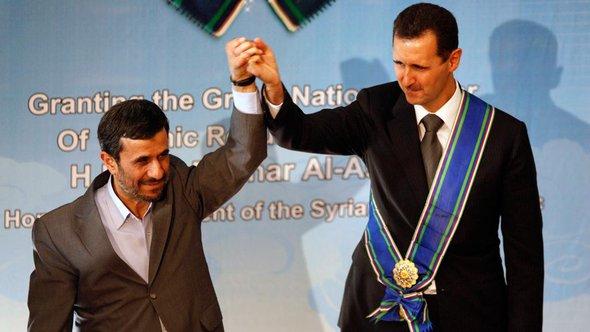 United they stand: Syria is one of Iran's main allies. In view of the fact that the Saudi leadership fears nothing more than Iranian dominance, it is not surprising that the Saudis are hoping that the Assad regime will be toppled, thereby dealing a blow to Iran

​​The great dilemma is that the regime in Riyadh would have to stem the Wahhabi influence in order to introduce reforms in state and society, but cannot do so because the fundamentalists are part of its power base. To please them, the Saudis support radical missionaries in many countries. Today, however, the most brutal brand of Wahhabi extremism is being propagated by Al-Qaeda, the terror network that has even attacked Saudi Arabia.

The Saudi leadership views the Arab Spring as a new challenge. It is afraid that the revolutionary dynamic may spread among its own young and increasingly dissatisfied population. This is why it is determinedly supporting fundamentalist Sunni forces all over the Arab world.

In this way, the regime is responding to the West's weakness, which became obvious in the Arab Spring. The Saudis are actively interventionist. Their double aim is to contain Iran's influence and at the same time to prevent any kind of liberalisation the people of Saudi Arabia might find attractive.

In cooperation with the United Arab Emirates, the Saudis deployed troops to Bahrain to quell protests against that island's Sunni monarchy in March 2011. On the other hand, their support for Salafis in Egypt is putting conservative pressure on the Muslim Brotherhood, whose brand of Islamism is more pragmatic.

In Riyadh's view, the Syrian crisis offers a historic opportunity because the overthrow of the Assad regime, which is one of Iran's main allies, would be a blow to Tehran. The Saudi leadership is convinced that Sunni forces, which feel closer to the Sunni heartland of Mecca and Medina than to Iran, will dominate Syria in the post-Assad era.

Domestically, the Saudi government is trying to buy calm and loyalty with expensive infrastructure projects and massive social spending. The trouble is that as long as Wahhabism remains the absolute ideology of state, ﻿there can be no real unity or real stability in the Saudi Arabian nation. For the time being, the Saudi gerontocracy will continue to fuel instability in its region.

The terror attacks in Paris, Brussels and Berlin were all carried out by men radicalised in jail. In Germany, politics and the judiciary are trying out new approaches to prevent ... END_OF_DOCUMENT_TOKEN_TO_BE_REPLACED

The assassination of the Iranian general Qassem Soleimani in a surprise U.S. drone strike is being used by the Islamic Republic of Iran to political ends, says Iranian journalist ... END_OF_DOCUMENT_TOKEN_TO_BE_REPLACED

With "Assad or We Burn the Country", Sam Dagher has furnished the world with some genuine ammunition against the Syrian regime's on-going campaign of disinformation. The only ... END_OF_DOCUMENT_TOKEN_TO_BE_REPLACED

There are only a few thousand Aramaic Christians left in south eastern Anatolia. And they are intent on preserving their ancient culture dating back one-and-a-half millennia. ... END_OF_DOCUMENT_TOKEN_TO_BE_REPLACED

Basma, Jad and Ma'zooza are about to join the Sesame Street family. The trio of new Arabic-speaking characters will help teach children in the Middle East to read and write, as ... END_OF_DOCUMENT_TOKEN_TO_BE_REPLACED

Comments for this article: Categorical Imperative

The Saudi leadership views the Arab Spring as a new challenge. It is afraid that the revolutionary dynamic may spread among its own young and increasingly dissatisfied population.

I dont believe they have feelings, the are afraid to lose their gilded throne... And that's selfish...