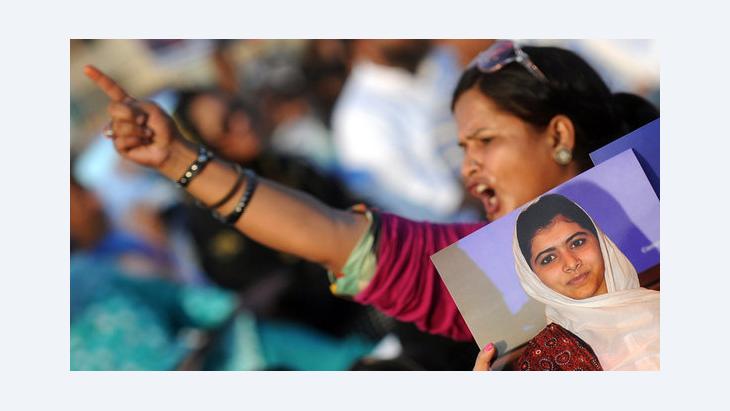 Malala Yousafzai came to prominence at the age of 11 when she began writing a diary for BBC Urdu about life under the Taliban in Pakistan's Swat Valley in 2009. She survived an attempt on her life in early October this year. Instead of frightening the country's education system into submission, the attack triggered a wave of solidarity with the young pro-education activist

The men who attempted to kill 14-year-old Malala Yousafzai on 9 October knew what she represented. Her active involvement since the age of 11 in campaigning for the rights of girls in her region to be educated was well known.

Malala's efforts, while applauded by the West and some segments of Pakistani society, were deeply resented by the obscurantist forces that go by the name of the Taliban, which in Pakistan calls itself Tehrik-e-Taliban Pakistan. Their choice of name is an ironic one, for Taliban, an Arabic word, means those seeking to be educated, whereas the Taliban's principal aim is to keep Muslim societies backward so that they can be persuaded to adopt a seventh-century version of Islam.

Education, particularly of women, stands in the way of achieving this goal. But the attack on Malala will most likely have an effect that is opposite to that intended by those who carried it out.

Several religious leaders joined the chorus of condemnation that followed the attack on Malala. In a sign of unity, a council of Sunni Muslim scholars in the eastern city of Lahore issued a fatwa, signed by 50 clerics, saying that the justifications cited by the girl's attackers were "deviant" and had no basis in Islamic law. 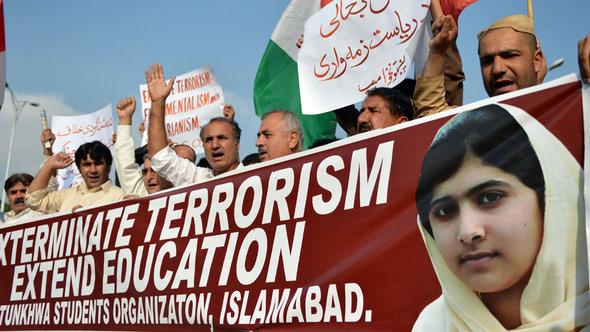 Support for Malala Yousafzai in the fight against religious intolerance and terrorism: according to the newspaper "Pakistan Today", over 50 Muslim clerics and scholars in a Sunni umbrella organisation condemned the attack on the young girl, saying that it was contrary to Islam and Sharia law

The Taliban seem to have been taken aback by the public and media reaction to the attack. Dawn, Pakistan's largest-circulation English-language newspaper, reported that Hakimullah Mehsud, the Pakistani Taliban's leader, had ordered his foot soldiers to target media organizations in Karachi, Lahore, Rawalpindi and Islamabad in response. Several TV channels had been extremely critical of the Taliban's assaults on Pakistani society. The extremists wanted to silence the majority that was waking up to the existential threat that radical Islam poses to their country.

There is a widespread belief that Pakistani women are doing poorly when it comes to obtaining education. That impression is correct to some extent. The overall literacy rate for women is undoubtedly low – much lower than that for men. But male education and literacy in Pakistan is not very high either. Although Pakistan is a signatory to the United Nations Millennium Development Goals, which include the attainment of universal literacy for both boys and girls by 2015, the country is far from achieving the target, with literacy rates of 70 per cent for boys and only 45 per cent for girls in 2010.

That said, over the 17-year period from 1993 to 2010, the number of girls enrolled in primary education increased from 3.7 million to 8.3 million. This implies a rate of growth of 6.7 per cent a year, about 2.5 times the rate of increase in the number of girls entering the primary-school age cohort. But, even with this growth rate, girls still accounted for just 44.3 per cent of the total number of enrolled students in 2010. 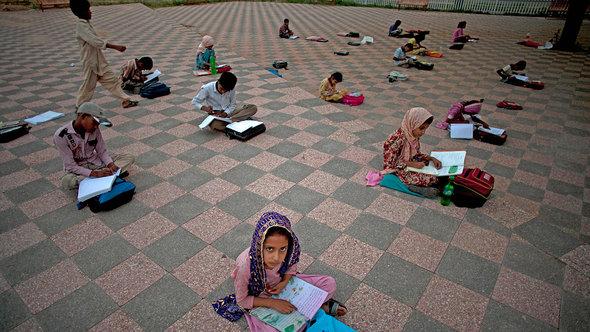 Far away from the UN Millennium Development Goals: in 2010, only 70 per cent of boys and only 45 per cent of girls in Pakistan were literate

It is in higher education that Pakistani women have made extraordinary progress in recent years. Their share of total college enrolment has increased from 36 per cent to 57 per cent over the last couple of decades, rising from less than 15,000 in 1993 to 436,000 in 2010. The proportion of women receiving higher education is approaching the 60 per cent mark, owing to an impressive 28 per cent annual rate of growth in their enrolment numbers in 2010, up from a 20 per cent increase in 1993. Although a very large number of girls drop out after primary school, the number completing higher education is now considerable.

This year, roughly 750,000 women will graduate from Pakistan's institutions of higher learning. If the current rate of growth is maintained, by 2015 the number of women completing higher education could exceed 1.5 million a year.

Had Malala died, she would ﻿eventually have been forgotten – another victim of the war that the extremists are waging in Pakistan. Her death would have added just one more individual to the tens of thousands who have already been killed in terrorist attacks across the country.

Malala's survival – and possibly even full recovery – provides a vibrant symbol for a troubled country. She will begin to be identified with the change that is already underway. It is not often recognized that women in Pakistan – at least those of a certain class – are receiving the kind of education that enables them to enter the modern sectors of the economy or to become entrepreneurs. In education, numbers make a revolution. The extremists understand that all too well.

Home
Print
Newsletter
More on this topic
Mohammed Hanif: My Country, Caving to the TalibanEducational Opportunities in Pakistan: Bringing the Poor at Par with the OthersPakistan:Two Sisters' Courageous Struggle
Related Topics
Democracy and civil society, Freedom of the press, Human rights, International terrorism, Media in Pakistan, Muslim women, Taliban, Women in the Islamic world
All Topics

"Flugt" is the world's first museum dedicated to the stories of those forced to flee. The new museum, which focuses on the fates of refugees then and now, is housed in a former ... END_OF_DOCUMENT_TOKEN_TO_BE_REPLACED

Foresight is needed to turn the tide of German policy. Being independent of Russia must not lead to dependence on authoritarian regimes in the Middle East. By Kristin Helberg END_OF_DOCUMENT_TOKEN_TO_BE_REPLACED

Rumi's poems, though generally stripped of their Islamic symbolism, are hugely popular around the world. Yet Islamic mysticism is still very much at the heart of these verses. ... END_OF_DOCUMENT_TOKEN_TO_BE_REPLACED

Very different Western reactions to the suffering in Ukraine and the Arab world show that there is a profound rift among cultures. Essay by Michael Young END_OF_DOCUMENT_TOKEN_TO_BE_REPLACED

The documentary "Nadia" tells the incredible story of Nadia Nadim, who was forced to flee from the Taliban as a child and became a football star. By Annabelle Steffes-Halmer END_OF_DOCUMENT_TOKEN_TO_BE_REPLACED

Comments for this article: A Vibrant Symbol for A Troubled Country

The case of Malala Yousafzai, the 14-year-old Pakistani social activist who is now struggling for her life after pro-Taliban militants attacked her, has captured the world’s attention with international media giving vast coverage to the incident.

However, many in Pakistan allege that Western media has been giving undue coverage to the incident only to support the unjustifiable interests of the US in its so-called war against terror.

A day after the attack on the Malala Yousufzai, 18 people were killed when a US drone fired missiles in Pakistan’s Orakzai Agency near the Afghan border.

This was one of the hundreds of US assassination drone attacks that have killed innocent civilians in thousands in Pakistan’s northwest. The attack hardly got global attention owing to the ongoing Western media’s successful campaign to divert public opinion against pro-Taliban militants whom Barak Obama has called a silver lining.

Washington claims drone strikes have been targeting Taliban and Al-Qaeda-linked militants, however, reports by locals show only civilians have been killed in these attacks.

Besides, the fact that the attack on Malala has come at a time when US assassination drone strikes have been making news across the country with the long march staged by Pakistan Tehreek-e-Insaf party drawing global attention to the issue, is becoming a constant concern for observers.

Observers also say that the attack on Malala has equally helped switch public attention from the country’s top issues like US assassination drone attacks, corruption and law and order situation that has plagued the country since Pakistan joined the so-called US-led war on terror.
IA
http://www.londonschoolofislamics.org.uk

END_OF_DOCUMENT_TOKEN_TO_BE_REPLACED
Social media
and networks
Subscribe to our
newsletter