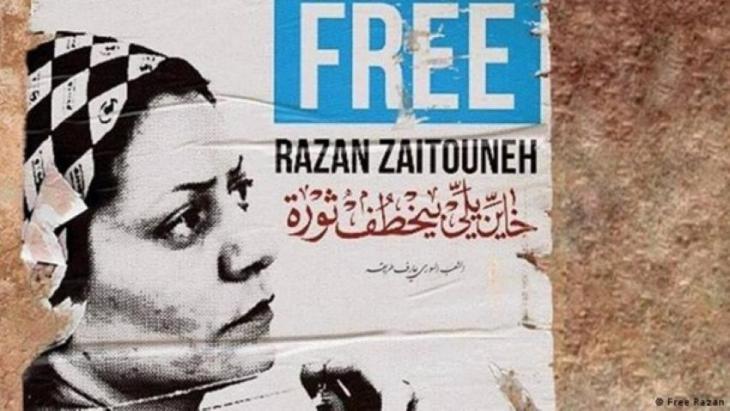 Razan Zeitouneh fought for justice in Syria and made enemies on all sides. Then she disappeared without a trace. Her fate remains unknown to this day. On the tenth anniversary of the revolution, Lewis Sanders, Birgitta Schulke-Gill, Wafaa Al Badry and Julia Bayer look back on her life

Syria, March 2011. Razan Zeitouneh was beaming as she swayed among the protesters. She was caught up in defiant revelry as she joined the crowds in chanting against the Syrian regime.

When the revolution kicked off, it was as if Zeitouneh had waited her entire life for it. She was among the first activists to call on the Syrian government to release political prisoners in an open letter published a day after the first major protests on 15 March 2011.

"We are facing one of the most brutal regimes in the region and the world with peaceful protests, songs of freedom – chanting for a new Syria," she said in a 2011 video statement. "I'm very proud to be Syrian, and to be part of these historical days, and to feel that greatness inside my people."

But that wasn't enough.

Back then, 34 year-old Zeitouneh became directly involved in organising protests in Damascus and other cities across the country. Her efforts would contribute to the formation of the Local Coordination Committees, which were instrumental to early democratic efforts in Syria. 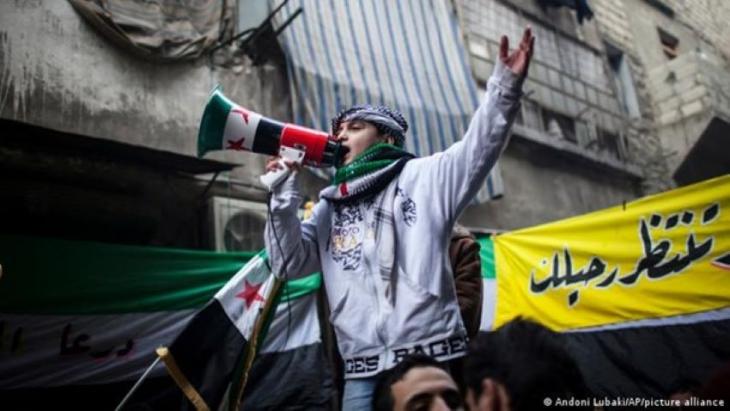 These were peaceful demonstrators: "We are facing one of the most brutal regimes in the region and the world with peaceful protests, songs of freedom – chanting for a new Syria," declared Razan Zeitouneh in a 2011 video statement. "I'm very proud to be Syrian, and to be part of these historical days, and to feel that greatness inside my people"

Her opposition to armed resistance set her apart from many of her contemporaries – some of whom would go on to support organised violence against the regime.

"The most important part of her personality is her rejection of injustice and her willingness to do anything to fight injustice," says Mazen Darwish, a long-time friend of Zeitouneh who leads the Syrian Center for Media and Freedom of Expression. "Razan had no ambition for power," adds Darwish, his eyes bright with the memory of her.

Even before she would spearhead revolutionary action in Syria, Zeitouneh championed the rights of the underserved, the marginal and those most at risk of the Assad regime's brutal security apparatus as a human rights lawyer. "People's rights and treating them with justice is not something open to interpretation nor is it a point of view," Zeitouneh said in the last article she wrote before her disappearance.

In one case during the mid-2000s, Syrian authorities had launched a targeted campaign against Salafists, the adherents of an ultra-conservative brand of Sunni Islam. It included jailing them for long periods of time on trumped-up charges.

It was a crackdown about which no one was allowed to speak, recalls Nadim Houry, director of the Arab Reform Initiative and also a friend of Zeitouneh. "Razan at the time organised for me a clandestine meeting in her office with some of the mothers of these detainees," Houry says. "She took an incredible risk for someone that she didn't know very well, but she wanted to get the story out and she was willing to put her life in danger to do so."

But the work Zeitouneh would become most recognised for was her documentation of human rights violations after the arrival of the Arab Spring.

In April 2011, only a month after protesters had taken to the streets against President Bashar Assad, the young lawyer co-founded the Violations Documentation Center (VDC), which still operates today.

In her latest exhibition in Japan, Farzaneh Khademian depicts figures who seem detached from their surroundings. In interview with Qantara.de, the Iranian photographer and painter ... END_OF_DOCUMENT_TOKEN_TO_BE_REPLACED

The catastrophic human rights situation in Bahrain is being largely ignored by the rest of the world. Despite all the damning evidence, which includes a Human Rights Watch report ... END_OF_DOCUMENT_TOKEN_TO_BE_REPLACED

Talks to salvage the 2015 Iranian nuclear deal have entered their eighth round in Vienna. Even if a deal is struck and some of the sanctions are lifted, the state of the Iranian ... END_OF_DOCUMENT_TOKEN_TO_BE_REPLACED

Every year in December, the team at Qantara.de takes a look back at the articles that proved most popular with our readers. This year is no different. Here is a run-down of the ... END_OF_DOCUMENT_TOKEN_TO_BE_REPLACED

Four musicians – two Iranian, two Indian – have created an album of music inspired by the poetry of Rumi. Like the poet's works, the album advocates tolerance, inclusivity and ... END_OF_DOCUMENT_TOKEN_TO_BE_REPLACED

END_OF_DOCUMENT_TOKEN_TO_BE_REPLACED
Social media
and networks
Subscribe to our
newsletter