But she eventually found that she could no longer work effectively in Damascus with Syria's secret police stalking her across the capital. In May 2011, her husband was arrested at their home and held for three months. As a result, she went into hiding for two years.

By April 2013, Zeitouneh had decided to flee for the rebel-held town of Douma on the outskirts of Damascus in the hope of continuing her work more freely. It would be her last known location.

The VDC would go on to investigate war crimes, such as the August 2013 chemical weapons attack on Eastern Ghouta, which Zeitouneh documented with her colleague Thaer H. 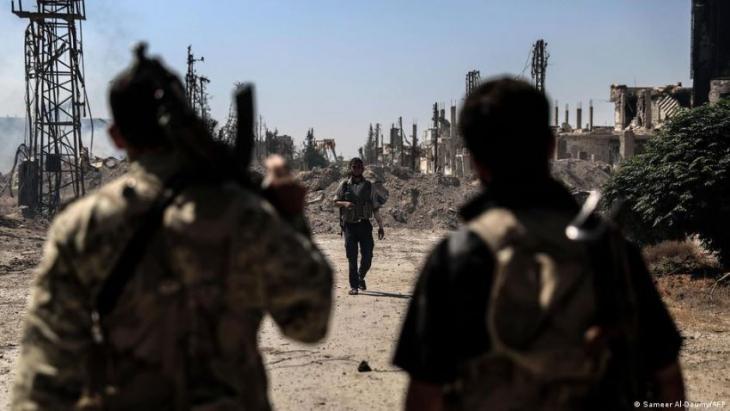 Atrocities, torture, assassinations, repression and displacement: Zeitouneh and the Violations Documentation Center documented not only the brutality of the Assad regime, but also the atrocities committed by the armed groups fighting for control in Douma and other parts of Eastern Ghouta in the summer of 2013. " We did not do a revolution and lose thousands of souls so that such monsters can come and repeat the same unjust history," the lawyer wrote in an email to her friend Nadim Houry. "These people need to be held to account just like the regime".

At least 1,000 people were killed in the attack, including more than 400 children, according to independent sources. "I witnessed the massacre myself," Zeitouneh wrote then. "I saw the bodies of men, women and children in the streets. I heard the mothers screaming when they found the bodies of their children among the dead."

Her arrival in Douma was challenging. Zeitouneh and her colleagues quickly figured out that their presence in the area was not welcomed. It was largely because she had immediately started investigating abuses committed by armed rebel groups, including Islamist militants.

"We did not do a revolution and lose thousands of souls so that such monsters can come and repeat the same unjust history," Zeitouneh wrote Houry, who previously worked for Human Rights Watch, in an email dated May 2013. "These people need to be held to account just like the regime."

Throughout 2013, armed groups vied for power in Douma, including the likes of Islamic State, the Nusra Front and Jaish al-Islam. The latter would go on to assume vast control over the area by co-opting its competitors – or outright eliminating them.

By summer, Zeitouneh was being targeted primarily for her work. But her refusal to wear a headscarf or adhere to conservative values also triggered hostile responses from some of the rebel groups.
In one instance, armed men shot into the air and left a bullet on her doorstep. In another, she received a threat letter in which the author wrote "I will kill you" five times. Multiple sources, none of whom can be identified for security reasons, said the letter was written by a member of Jaish al-Islam.
"She created initiatives for women, and started documenting violations, in prisons and elsewhere," says Thaer, her colleague at the VDC. "All this made her a competitor for Jaish al-Islam, its control, its ideology and its desire to establish an emirate or caliphate."

The Middle East is plagued by electronic armies working at the behest of one regime or another. Long used by those in power as a weapon in the fight against activists and ... END_OF_DOCUMENT_TOKEN_TO_BE_REPLACED

On Friday, Iranians head to the polls to elect a new president. What's at stake in this presidential election? Sanam Shantyaei explains. END_OF_DOCUMENT_TOKEN_TO_BE_REPLACED

For centuries, the great classical Persian author Hafez has inspired German writers. Translations, adaptions and homages have been created in his wake, and the process continues ... END_OF_DOCUMENT_TOKEN_TO_BE_REPLACED

In the run up to Iran’s presidential election, Supreme Leader Ayatollah Ali Khamenei has sought to entrench his power. Alex Vatanka asks whether a sharp slump in voter turnout ... END_OF_DOCUMENT_TOKEN_TO_BE_REPLACED

Turkey's parliamentary and presidential elections are scheduled for June 2023. But they are already casting a shadow. While the opposition is calling for early elections, ... END_OF_DOCUMENT_TOKEN_TO_BE_REPLACED
Author:
Lewis Sanders & Birgitta Schülke-Gill & Wafaa Al Badry & Julia Bayer
Date:
Mail:
Send via mail

END_OF_DOCUMENT_TOKEN_TO_BE_REPLACED
Social media
and networks
Subscribe to our
newsletter