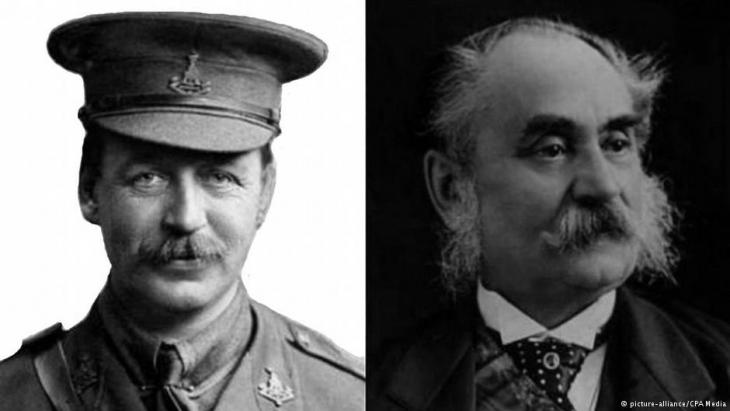 "A tapestry of plans and promises"

One hundred years ago, the Middle East was divvied up between the French and the British. The historian Maurus Reinkowski talks about the long-term effects of the colonialist powers' splitting up of the spoils. Interview by Andreas Noll

[Ed: The terms of the Sykes-Picot Agreement were set out in a letter dated 9 May 1916. The agreement was signed by the French and the British on 16 May. The secret deal envisioned the subdivision of much of the Ottoman Empire after the end of the First World War. The French were to control an area extending southeast from what is today Turkey, across northern Iraq and Syria and all the way to Libya. The British, on the other hand, were to rule an area that would include what is now central and southern Iraq. The area between the two - today Syria, Jordan, western Iraq and the northeastern portion of the Arabian Peninsula - was to become an Arab kingdom under a joint French-British mandate.]

One hundred years ago, the Sykes-Picot Agreement divided the Middle East up between France and Great Britain. What were the central goals that the countries were pursuing at the time?

Maurus Reinkowski: Until then, the Ottoman Empire had ruled the region. Paris and London, however, were of the opinion that the Ottoman Empire would not survive. Sykes-Picot was intended to prevent any conflicts that might arise when divvying up spoils after achieving victory in WWI. Nonetheless, there were indeed major disagreements between the French and the British about the exact demarcation. So the agreement was in fact only a first attempt at a division that would turn out quite differently in the end.

Why is the agreement a cause for so much emotion in the Arab world a century later?

Reinkowski: The Sykes-Picot Agreement is generally seen as a symbol of the very complicated and complex re-ordering of the region after the First World War. There is a whole list of other important agreements and declarations. I would just like to point out the Balfour Declaration here. It was issued in November 1917 and in it British Foreign Secretary Arthur James Balfour granted London's Jewish community a national homeland in Palestine. Or the Hussein-McMahon Correspondence, in which Hussein bin Ali – leader of the Hejaz – and Sir Henry McMahon, British High Commissioner in Egypt, expounded upon the creation of an independent Arab state. All of these agreements were a kind of tapestry of plans and promises. 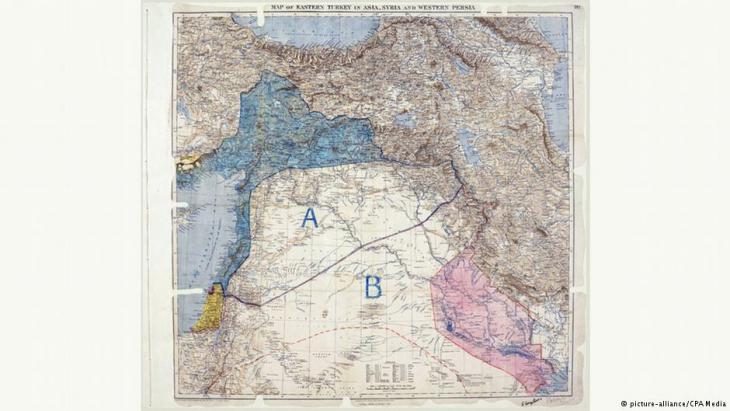 Scarred by colonialism: ″there is a great uneasiness among the Arab people when it comes to the long history of Western influence in the Middle East. People tend to see many aspects of the misery that haunts the Middle East today as being rooted in the Western policies so well-documented in the period following the First World War,″ says Reinkowski

The reason Sykes-Picot is so prominent is because of the story of its discovery. Following the Bolshevik revolution in Russia, Commissioner of Foreign Affairs Leon Trotsky published the agreement as a particular example of the perfidy of the Entente powers and their purely imperial ambitions. The map that accompanied the agreement also clearly illustrated that imperial mentality. They simply drew a line, hundreds of kilometres long, stretching from Kirkuk to Haifa.

In the Arab world, there is a kind of popular wisdom that recounts the long history of the West's animus toward the Orient, the Arab people and even the Islamic world. The Sykes-Picot Agreement fits rather nicely into that kind of conspiracy theory: it was secret and served to further the ambitions of the major powers.

When "Islamic State" (IS) blew up border checkpoints between Iraq and Syria two years ago, they gained media attention by referring to the end of the Sykes-Picot Agreement and announcing that a new Islamic caliphate would replace the old "artificial" Arab states created by colonial powers. Can IS count on support from people who are hostile toward nation-states?

Reinkowski: Yes, I certainly think so. But before I go any further, a historian's note: the opening of the border between Syria and Iraq did not do away with the Sykes-Picot border, because Sykes-Picot never envisioned such a border in the first place. That border arose from a later French-British agreement that finally fixed the division between the French and British mandates in the early 1920s.

Nevertheless, the basic symbolism still works quite well. There is a great uneasiness among the Arab people when it comes to the long history of Western influence in the Middle East. People tend to see many aspects of the misery that haunts the Middle East today as being rooted in the Western policies so well-documented in the period following the First World War. However, if you were to ask someone from Lebanon or Jordan if they would like to join Islamic State, or would be willing to accept some type of greater Syrian state – even one free of the Islamist leanings of IS – a large majority of them would say no. The people are generally rather satisfied with their nation-states and have no desire to exchange them for an imposed identity as part of any larger entity.

What role does Sykes-Picot play in political Islam?

Reinkowski: Sykes-Picot is a building block for the experience of the dominance and obtrusiveness of the West in the Arab – or even the Islamic world. But I think Sykes-Picot has become so prominent because the destabilisation of Iraq in the mid-2000s – and of Syria since 2011 – has constituted a destabilisation of precisely that region defined by the agreement. Sykes-Picot really didn't play any role in the Iranian Revolution, nor was it important for al-Qaida. 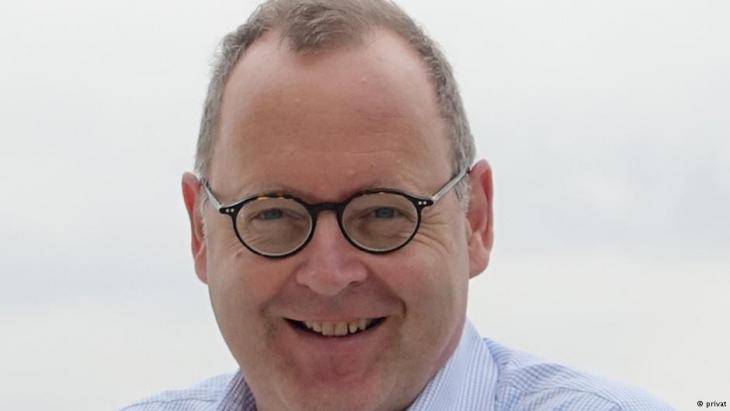 Maurus Reinkowski has been professor of Islamic and Oriental studies at the University of Basle since 2010. His research focuses on the modern and contemporary history of the Middle East and the Levant

Were the Kurds the big losers in the agreement?

Reinkowski: The option of a Kurdish entity in Eastern Anatolia, where the Kurds represented a relevant majority of the population, was not dealt with in Sykes-Picot, but was vaguely outlined in the Treaty of Sevres in 1920. The Treaty of Sevres, however, could not be implemented because of the Turkish national movement under Ataturk. And it was replaced in 1923 by the Treaty of Lausanne, which recognised Turkey under international law. The Kurds were not even mentioned in the Treaty of Lausanne: they quite literally disappeared under the table. Therefore, there is definitely a sentiment that the Kurds, as perhaps the most populous people in the region not to be given their own country, suffered a grave historical injustice.

A century ago European diplomats boldly drew borders into the Middle East. Are there blueprints for a more just demarcation of the region today?

Reinkowski: That is the big problem: the vision of wanting to create a more just order on the one hand – for instance, giving the Kurds the possibility to live in their own federal state – and being prisoners of realpolitik on the other. Western countries think very much along the lines of realpolitik. They want to maintain existing borders as much as possible because they have no idea whether drawing new borders might not set off a domino effect.

One might easily imagine that there could be a division in Iraq because conditions there are relatively clear: Shias in the south extending to Baghdad, Sunnis in the middle and Kurds in the north. The situation in Syria is far more difficult because there is no stable balance of power. One simply doesn't know to whom one would give land.

I suspect that politicians will move forward cautiously and attempt to manoeuvre through the situation as unscathed as possible, provided that many basic parameters remain stable: the guarantee of Israel's right to exist, the protection of the Arab Gulf monarchies that are so important for the stability of the region and also the affirmation of Turkey's current position as a privileged partner of the USA and Europe.

Using a graphic novel to address a contentious issue like the Algerian war of independence may seem an odd choice, but new release "Algeriennes", translated into English by Ivanka ... END_OF_DOCUMENT_TOKEN_TO_BE_REPLACED

Although a unity government was formed in Libya in March 2021, tensions and possible crises between the political actors are already emerging. What problems does the country face ... END_OF_DOCUMENT_TOKEN_TO_BE_REPLACED

India hits record numbers of COVID-19 infections worldwide for the sixth day running, as health systems buckle under the pressure, and shortages of medical oxygen and hospital ... END_OF_DOCUMENT_TOKEN_TO_BE_REPLACED

On 7 March, Switzerland became the latest European country to vote in favour of a so-called "burka" ban. It was yet another feather in the cap of the right-wing populist Swiss ... END_OF_DOCUMENT_TOKEN_TO_BE_REPLACED

German Middle East analyst Guido Steinberg and television journalist Ulrich Tilgner have both published new books on the conflicts in the Middle East. Their analyses and their ... END_OF_DOCUMENT_TOKEN_TO_BE_REPLACED

In Grenoble, France, two professors have been pilloried in a dispute over the use – or otherwise – of the term Islamophobia. Is freedom of speech in jeopardy? By Stefan Dege and ... END_OF_DOCUMENT_TOKEN_TO_BE_REPLACED
Author:
Andreas Noll
Date:
Mail:
Send via mail

END_OF_DOCUMENT_TOKEN_TO_BE_REPLACED
Social media
and networks
Subscribe to our
newsletter