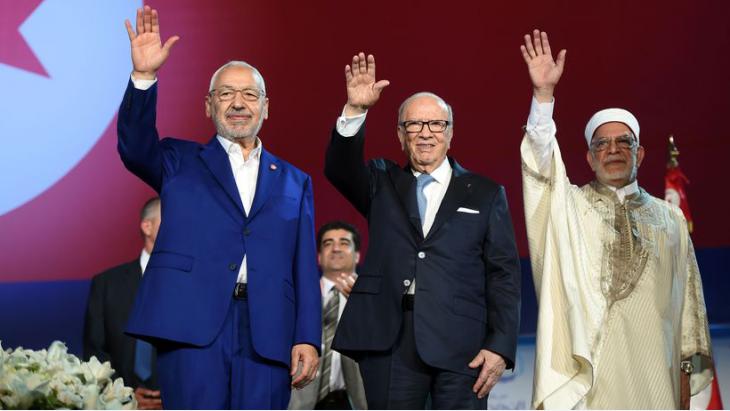 The latest Ennahda party conference, held in the Tunisian town of Hammamet, revealed in both its symbolism and the new parlance used by the party a renunciation of political Islam in favour of Muslim democracy. By Ivesa Lubben

At the opening event at the Olympic Hall in Rades, broadcast live on Tunisian television, the national anthem was sung and an oversized Tunisian flag symbolically unfurled, Ennahda thus presenting itself to the more than 10,000 followers and guests attending as a national force in the Maghreb country.

"Tunisia is more important than Ennahda," declared party leader Rachid al-Ghannouchi in his opening speech, honouring the martyrs in the police and armed forces who had lost their lives in the fight against terrorism and also paying tribute to the martyrs of the revolution and the struggle against the dictatorship of Ben Ali.

Al-Ghannouchi repeatedly evoked the need for Tunisia to form a united front in the fight against terrorism and to rebuild its economy, thus placing himself squarely in the tradition of controversial personalities such as the reformist theorist Khair al-Din al-Tunisie, Tunisia's state founding father Habib Bourguiba and his rival Saleh Ben Youssif, as well as the Communist and trade union founder Ferhat Hachad. This is without doubt an indication that the Islamic Ennahda Party is trying to carve a niche for itself at the centre of Tunisian society.

The highlight of the opening event was the appearance of President Beji Caid Essebsi, who was greeted with loud cheers by party members. Essebsi praised Al-Ghannouchi's efforts to encourage national unity while discrediting any totalitarian understanding of Islam and urging Ennahda to demonstrate how it has now transformed itself into a civil democratic Tunisian party.

What originally paved the way for a national dialogue in the days of the constitutional crisis in Tunisia was a secret meeting between the former Bourguiba confidant and the Ennahda opponent Essebsi in August 2013 in Paris. Despite ongoing pressure both from within and from the outside, the country was thus spared a domestic policy scenario like the one that unfolded in Egypt. 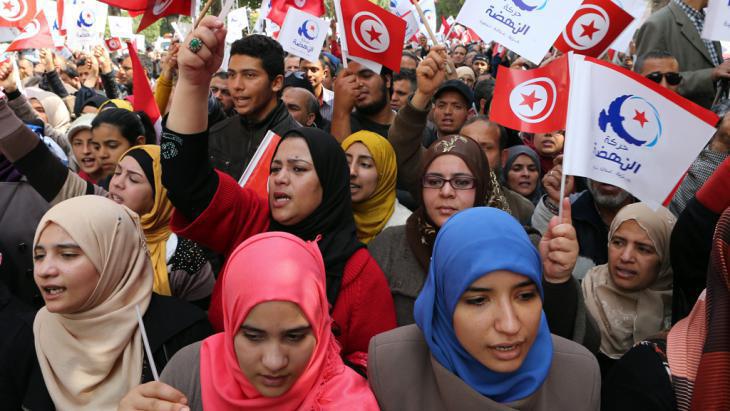 Milestone for Tunisia's Islamic democracy: according to current surveys, 70 percent of Tunisians are in favour of a separation of mosque and state, an attitude that was evident at the party conference of the Islamic Ennahda Party. The party intends in future to clearly distinguish its religious activities and engagement in civil society from its politics

The "coalition of two old men" met with criticism, however, at the grass roots level and in Ennahda circles. There were fears that this compromise between the elites might lead to the reconstitution of networks from the old regime, while waylaying the process of rehabilitating the regime's victims. Former President Moncef Marzouki, once an Ennahda coalition partner, refused to attend the party conference on these grounds.

The 10th party conference was originally planned as an extraordinary conference devoted to clarifying the relation between the party's religious mission (da'wa) and its politics. The Islamic Ennahda was originally formed in 1981 under the name Mouvement de la Tendence Islamique (MIT) as a religious renewal movement aiming at defending Tunisia's Islamic identity against the secular policies of state founder Bourguiba and his successor Ben Ali. Under Ben Ali, Ennahda was then banned. It was only after the revolution of 2011 that the leaders were able to return to Tunisia and integrate the party into the political process.

Today, the party is the largest political force in the country with approximately 80,000 to 100,000 members and, with 67 seats, it is now the strongest parliamentary group following the break-up of Nidaa Tounes. Ennahda currently has one minister in the coalition government.

Loutfi Zitoun, political adviser to Al-Ghannouchi, had already called for a separation of religion and politics in Tunisia in a June 2015 interview with the Tunisian ″La Presse″. This demand met with protests from the grass roots and from the conservative Ennahda cadre, however, which feared that a strict separation of da'wa and politics would cause the party to forfeit its identity and thus the glue that held the movement together in days when it was outlawed.

In the course of intense internal debates, a consensus finally emerged which the party refers to as "specialisation": not a splitting up of the movement, but more of a division of labour. Every party member is called upon to engage according to his own interests and abilities in social, cultural or religious organisations in civil society that are independent of the party.

A democratic party with an Islamic frame of reference

The draft resolution for the party conference stated that, in a modern democracy, civil society plays an important role as a corrective for politics. Ennahda is thus adapting to the new legal situation in the country, which it itself helped to conceive at the constitutional assembly. The new constitution grants civil society far-reaching opportunities for participating in political decision-making, but also prescribes a consistent separation between civil society and political parties. Party functionaries are therefore not allowed to simultaneously hold office in civil society organisations. 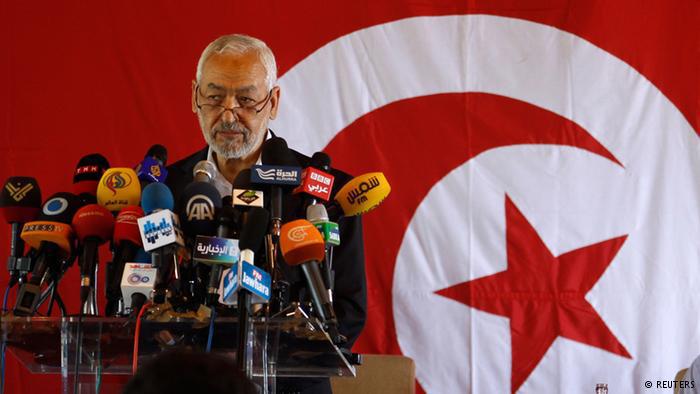 Essential as a figure of integration: "Rachid al-Ghannouchi wants to lead the process of transformation into a political party to its conclusion and leave a strong Ennahda behind for his successor – a party that has learned to deal with internal diversity," writes Lubben

In its new programme, Ennahda departs from the concept of "political Islam", one that is today weighted with too many negative connotations. The party defines itself instead as a "democratic political party with an Islamic frame of reference and a national platform". With the adoption of the new Tunisian constitution, which sets down Islam as the state religion, the identity question is now clarified, Rachid al-Ghannouchi pointed out in his opening speech. Now it is time to translate the values set down in the constitution into concrete development programmes. This is the only way to codify the achievements of the revolution: "Ennahda was created to defend our identity, it has ensured the democratic transition and today it is focusing on economic reform."

Despite the official departure from political Islam, the party continues to be committed to a holistic understanding of Islam on the basis of the so-called "maqasid" (the higher goals of Sharia law) while predicating its party programme on a canon of Islamic values.

The most controversial decision at the conference was to discuss changes in the party statutes rather than deliberating on the new self-image of the party as had been expected. The majority of delegates to the conference had demanded that the executive board, which has thus far been appointed by the Chairman – i.e. by Rachid al-Ghannouchi – should henceforward be elected by the Shura Council, the highest decision-making body, which is elected at the party conference.

Al-Ghannouchi declared in reaction that he would in that case no longer be available as party leader, as he was only willing to take responsibility for the party if it had homogeneous collective leadership. As a result, the old statute was retained. There was evidently a broad consensus among the delegates that the party would be unable to do without Al-Ghannouchi as integration figure in this current phase. In the elections for chairman, he was re-elected with 800 out of 1,058 votes. 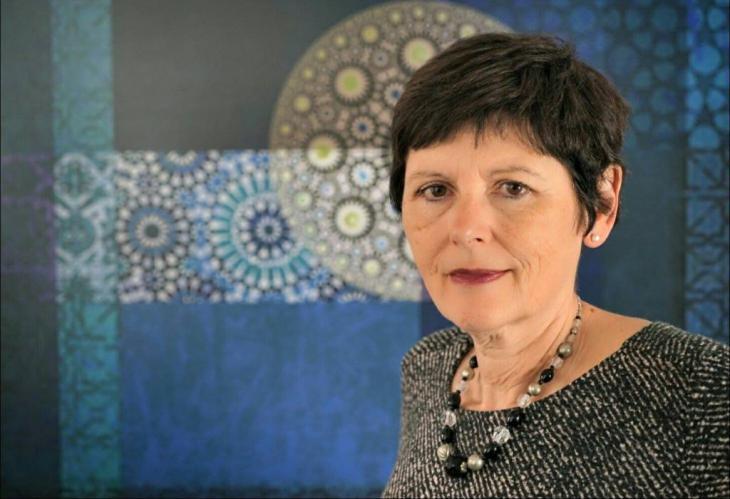 Critics thereupon accused the party of having double standards. A party could be only be credibly democratic if it were also run using democratic procedures. But Al-Ghannouchi is in fact probably interested in something else altogether: he wants to lead the process of transformation into a political party to its conclusion and leave a strong Ennahda behind for his successor – a party that has learned to deal with internal diversity. The party did after all resolve at the conference to amend its statutes to the effect that the party chairman would be limited from the 9th party conference onward to two terms in office, meaning that the 10th conference ushered in the end of the Al-Ghannouchi era.

Since 2011 Ennahda has weathered many an internal conflict between the supporters of national reconciliation and those in favour of a thorough investigation of the crimes committed under Ben Ali and in the era of Bourguiba. There have also been conflicts between political cadres who want a more open party and the party's religious wing, as well as between endorsers of free-market economic programmes and critics of economic liberalisation.

The ability to overcome such conflicts can be attributed to the influence of Rachid al-Ghannouchi as an integration figure, but also to the party's Islamic identity as a common reference point. Whether Ennahda will in future still be able to integrate the different currents that came to the fore at the conference, or whether it will end up splitting up into separate organisations – like many other Tunisian parties before it – remains to be seen.

Why are predominantly Muslim countries lagging behind when it comes to democracy and human rights? Dutch sociologist Ruud Koopmans uses a lot of figures to underpin his theory ... END_OF_DOCUMENT_TOKEN_TO_BE_REPLACED

While Tunisians remain committed to democracy, they are feeling the painful lack of economic and political progress. Much has been achieved in the way of personal freedoms, but ... END_OF_DOCUMENT_TOKEN_TO_BE_REPLACED

"Tlamess", a visually striking experimental feature by Tunisian director Ala Eddine Slim, brings two drop-outs together in a weird, wild cohabitation in the woods: a desperate ... END_OF_DOCUMENT_TOKEN_TO_BE_REPLACED

Tunisia is considered a paragon of the Arab Spring. Despite democratic reforms, however, a mood of political frustration and economic despair still prevails, particularly among ... END_OF_DOCUMENT_TOKEN_TO_BE_REPLACED

Equality in divorce, a ban on polygamy: reformers of Islamic family law have a clear agenda. They are exploiting the ambiguity of traditional jurisprudence. By Joseph Croitoru END_OF_DOCUMENT_TOKEN_TO_BE_REPLACED

Hassan Aourid is one of the most important political and intellectual figures in Morocco. In interview with Ismail Azzam for Qantara, Aourid outlines his vision of the decline of ... END_OF_DOCUMENT_TOKEN_TO_BE_REPLACED
Author:
Ivesa Lübben
Date:
Mail:
Send via mail

END_OF_DOCUMENT_TOKEN_TO_BE_REPLACED
Social media
and networks
Subscribe to our
newsletter