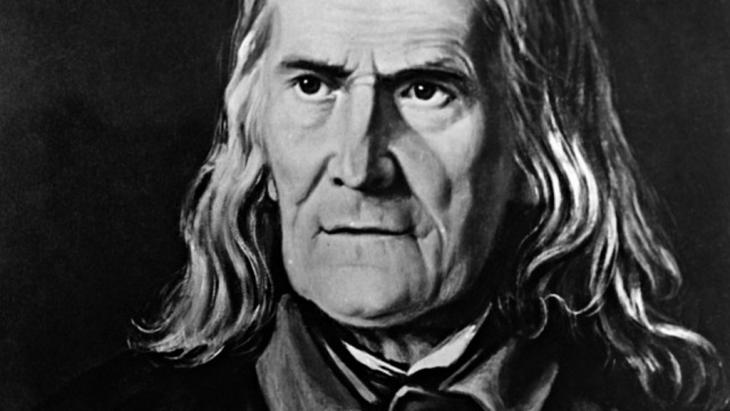 One of Germany′s greatest poets died 150 years ago – and today, hardly anyone is familiar with him. But all those years ago, Friedrich Ruckert knew how to integrate refugees successfully. By Christoph Meyer

Arabic, Persian, Old Ethiopian: Friedrich Ruckert apparently mastered 44 languages and 25 writing systems. He is said to have required about six weeks to learn a new language. His translation of the Koran into German is the only one that is actually readable. Ruckert was a linguistic genius and a poet who, so his fans say, could compete with Goethe. Despite this, he is now all but forgotten.

And this is unfair, given that the man from Franconia, who died on 31 January 1866, had a vision that Germany is desperately in need of, now more than ever: he wanted people of all cultures and religions to learn to get along. His idea was that when people read the poetry of other nations, they gain access to their attitude to life. The foreign culture becomes a part of them.

A fettered spirit from within me,

To build a bridge from thought to thought

And unlock the world-sense we forgot

He was very aware that not everyone possessed his gift for languages. He therefore worked like a Trojan to translate great works from other cultures into German – in such a way that their poetic character was preserved. This was where Ruckert the poet came into play.

The Koran: more than just a translation

He was not only able to understand the source language intuitively; he also managed to find exact correspondences in his mother tongue. One of the best examples of this is the 112th sura of the Koran. For Muslims, the inimitable style of the Koran is proof that Muhammad really was sent by God. Germans who want to understand that, but don′t speak Arabic, have only one choice: read Ruckert. Where a widely-used English translation of this sura has:

He neither begets nor is born

Nor is there to Him any equivalent 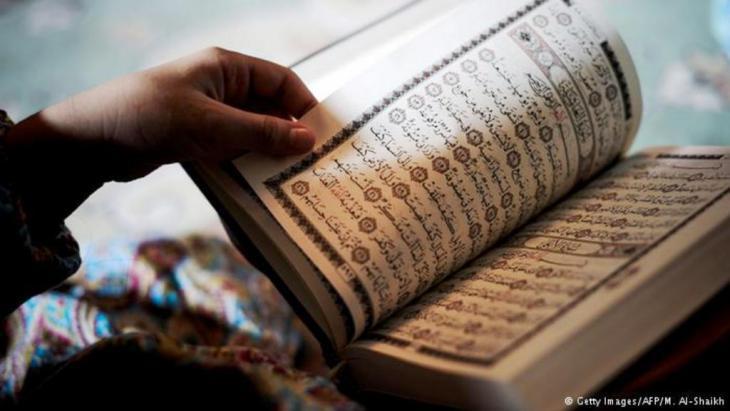 Ruckert′s translation of the Koran, published in 1834, was a poetic masterpiece of Sturm und Drang. He focused on the ″lyrical appeal ″ of the Islamic revelation. As the Viennese Orientalist Josef von Hammer-Purgstall wrote in 1811: ″The unique charm of Arabic poetry lies not only in its image and flow but also, and principally, in the consonance of its rhyme – to Arab ears, truly, the song of sirens″

But Ruckert also chooses poetry because it is the oldest form of literature. As the historian Rudolf Kreutner, who is working on Ruckert′s literary estate in Schweinfurt, explains, „Everything passed down before the age of writing was lyrical, because that just made it easier to remember things." Ruckert was convinced that there must be an original myth. A story going back to the early days of mankind, which must be familiar to all people. Global poetry as global reconciliation.

Ruckert didn′t want to be the centre of attention

But it is Goethe, not Ruckert, whom we quote when we need a German advocate for international understanding. Despite the fact that in his "West-Eastern Divan", the Germans′ favourite poet was only able to recreate Oriental poetry based on other people′s translations. The vain man of letters also sold poems by his lover Marianne von Willemer under his own name. Today, he would probably have a debate on his hands and a "Goethe plagiarism wiki" on the Internet.

Friedrich Ruckert, by contrast, did not enjoy being the centre of attention. The 6′ 6" man liked to spend the whole day in his dressing gown. When he appeared at the ceremony for the Prussian "Pour le Merite" order in 1843, he was the only one without a medal of pure gold round his neck, despite having received it just the previous year. When Alexander von Humboldt spoke to him about it, he is said to have replied that his wife had used the precious ribbon to tie her bonnet.

Ruckert came far closer than Goethe to the essence of Oriental poetry and yet maintained a more critical distance from Islam. He took no part in romanticised Orientalism. "Ruckert was well aware that he had grown up and been socialised in Protestant Germany," says the historian Rudolf Kreutner. The poet was open to the foreign culture, but he knew where he stood.

What would Ruckert say today if we asked him how to manage the integration of refugees? Kreutner is certain that "he would demand that each of the two sides engage intensively with the poetry of the other."

But even if hordes of people are not turning to poetry in the face of the refugee crisis, the core of Ruckert′s demand is an imperative to be heeded in all our efforts towards integration. Genuine mutual understanding requires both sides to engage intensively with the culture that is foreign to them, without renouncing their own identity in the process.

6000 unpublished poems from Friedrich Ruckert′s later work are still slumbering in his literary estate. Some address topics as current as poisoning by industrially produced food.

Home
Print
Newsletter
More on this topic
Interview: "Translation is the most important channel of intercultural dialogue"Interview with Claudia Ott: "Love is the Language of the Orient"Koran Translations: Precise or poetic?
Related Topics
Arabic language, Islam and the West, Islam in Germany, Translation, Travel, Travels in the Orient
All Topics

In Doha, Arabs from Morocco, Tunisia, Egypt and Algeria are gathering to celebrate the first ever FIFA World Cup to be held on Arab soil. The criticism from Europe? Over the top, ... END_OF_DOCUMENT_TOKEN_TO_BE_REPLACED

November 2022 sees the Arab world firmly in the spotlight with the COP27 in Egypt and the FIFA World Cup in Qatar. Public trust in MENA governments is weak, thanks to their ... END_OF_DOCUMENT_TOKEN_TO_BE_REPLACED

Palme d’Or winner "Boy from Heaven" is a classic crossover film in which cultural elements are mixed together in haphazard and random fashion. Shady Lewis Botros bemoans the ... END_OF_DOCUMENT_TOKEN_TO_BE_REPLACED

COP27 in Sharm el-Sheikh is turning into a PR disaster for Egypt’s military regime. Instead of praise for the host, the news is full of solidarity for imprisoned activist Alaa ... END_OF_DOCUMENT_TOKEN_TO_BE_REPLACED

END_OF_DOCUMENT_TOKEN_TO_BE_REPLACED
Social media
and networks
Subscribe to our
newsletter