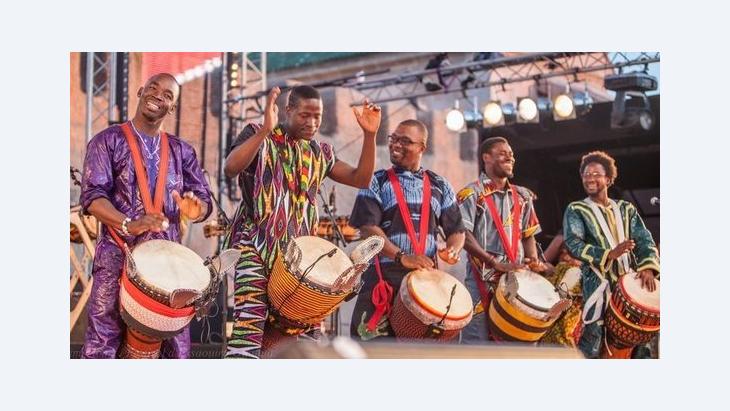 15th Gnawa Music Festival in Morocco
A Festival of Fusion

﻿As dynamic as ever in its fifteenth year, the Gnawa and World Music Festival brings together Gnawa trance and the great performers of world music, jazz and pop in the picturesque and very windy city of Essaouira on Morocco's Atlantic coast. Andreas Kirchgäßner took in the atmosphere

﻿There is a well-established ritual to the performances on the festival's many stages: first of all, one of the invited world musicians will perform, giving the audience a chance to get to know the music. This is followed on the same stage by a concert by a Gnawa group, which will then later play together with the world musician.

Such Gnawa concerts are extremely popular with the Moroccans, though first-time European visitors to the festival, unused to the sound, tend to find the music rather archaic and jarring. Moroccan audiences are familiar with the lyrics, although they contain words from the West African Bambara and Wolof languages, and everyone sings along as the dancing grows more and more ecstatic. Young girls in particular do their utmost to try and escape the watchful eyes of mothers and brothers and dance till they drop to the trance music.

These Gnawa concerts are the true essence of the festival: the fusion of world musicians and Gnawa. The Gnawa use almost no improvisation, relying instead on their repertoire of African pentatonic and polyrhythmic music. It is breathtaking how quickly and harmoniously traditional and world music blend and how each fusion develops its own unique flair. 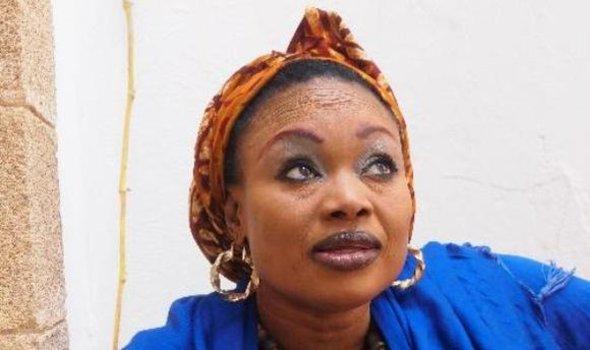 Oumou Sangaré, who hails from Bamako in Mali, is one of the best-known Wassoulou musicians in the world and a renowned women's rights activist; many of her texts deal with the subjects of love, marriage, freedom and self-determination for women

The most successful fusions involving the Gnawa musicians are, unsurprisingly, those with musicians with an African background; the Gnawa people originally came here as slaves from West Africa.

"For me, there was an instinctive, non-verbal understanding with the Gnawa musicians," says jazz saxophonist Jacques Schwarz-Bart from Guadeloupe. It was the rhythm and the pentatonic, and, above all, the call and response principle, between singer and choir, or what the Haitian Voodoo priest Erol Josué calls "the African Bible", an invocation of the spirits common to Voodoo and to the Gnawa. For Schwarz-Bart, it is a coming together, like a reunion with a long lost brother. "We find out about a part of ourselves, our identity, we see ourselves reflected in each other, but in new ways, new facets, that strengthen all of us."

The undisputed star of this year's festival is the singer Oumou Sangaré, who has come with her group from civil-war-torn Mali. She plays a late-evening concert on the festival's biggest stage close to the city wall. The audience is large; West African music is popular in southern Morocco. Her performance comes complete with a stage show of the kind usually reserved for big pop stars: beautiful dancers, backing singers and a playful flirtation between the performer and her male musicians.

Breakfast with the diva

Rhythm and melody are heavily influenced by the very popular West African Wassoulou, a style of music descended from traditional hunting songs and played on both traditional and modern instruments. And, of course, the ensemble is later joined by the Gnawa musicians with their three-sided slap bass, the gimbri, and their metal castanets. For the audience, this fusion of West African and Moroccan interpretations of the music of the Sahel is invigorating, enhancing and positive.

At the end, Sangaré makes a heart-felt appeal for peace in Mali. On the next day, some Moroccans tell me, without my asking, that they found this the most moving thing in the concert. It is another reminder of just how close the Moroccans feel to events in West Africa.

At 44 years of age, a little fuller in the figure than of yore, the diva, beneath her rather too heavy make-up, is still beautiful. This, of course, is not the only reason for trying to get permission to interview her. An elusive festival press office at first makes this seem an unlikely prospect, until, out of the blue, we receive an invitation to have breakfast with her.

Though still tired from the concert, Oumou's make-up has once again been flawlessly applied. Just like on stage, she is wearing a close-fitting, low-cut dress, designed to show off her figure. She is very friendly with an obvious sense of humour, and between constantly ringing iPhones and iPad messages, she affirms the closeness of the relationship between her own music and that of the Gnawa. It is all down to the slave trade, she explains. The slaves took their culture with them to the countries of their servitude. There, their culture blended with indigenous cultural influences, so that the Oriental influence in Gnawa is as unmistakeably present as the British influence in US American blues music. The crucial common characteristic, however, remains the rhythm. 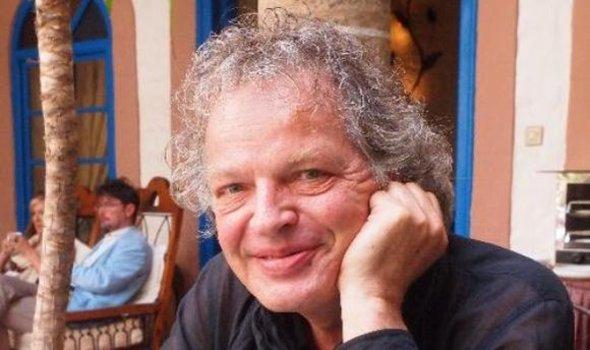 Joachim Kühn, a virtuoso jazz pianist who is fascinated by musical encounters with different cultures, is currently working with the Moroccan Gnawa musician Majid Bekkas and the Spanish percussionist Ramon Lopez

Asked about her strong involvement in women's rights, something for which she has received international awards, she offers a theory of her own. Wherever you meet intelligent people, you will find that their mother was also intelligent. She acknowledges the importance of the father, too, but maintains that the mother's much closer relationship to the child is decisive. This, she feels, is why it is so crucially important to support women's rights, not just for the women themselves, but for the good of society as a whole.

I talk to Réda Allali, singer and guitarist with the band Hoba Hoba Spirit from Casablanca, about the changes in the Arab world. The rock band has gathered a reputation due to its audacious, often irreverent lyrics. Allali explains that Morocco is not Tunisia, Egypt, Libya or even Syria, that it has more in common with Jordan, a reformist kingdom with a king who is both guarantor of stability and of a relatively free press.

The liberal King Mohammed is the undisputed authority in the country, and loved, he says, by almost everyone. These are the sentiments of a singer from a group once regarded as very rebellious and has demonstrated incredible courage in its head-on confrontations with the Moroccan authorities. But Allali is quick to point out that he is a musician, not a politician. In their concert later, the group really lets it rip. Their audience – Hoba Hoba Spirit has a huge young Moroccan fanbase – knows all the songs and sings along.

The "Woodstock of Morocco"

Formerly from the GDR, jazz pianist Joachim Kühn is very well known in Germany. His career has taken him from classical music, via jazz and free jazz, to world music and Gnawa. The interview with him has to be conducted by shouting from the side of the stage, but he is very easy-going. He explains that ever since childhood, the playing of a musical instrument would put him into a kind of trance – a habit his first piano teacher tried to cure him of. His band's current line-up includes Gnawa musician Majid Bekkas, one of the few Gnawa who is a true improviser. 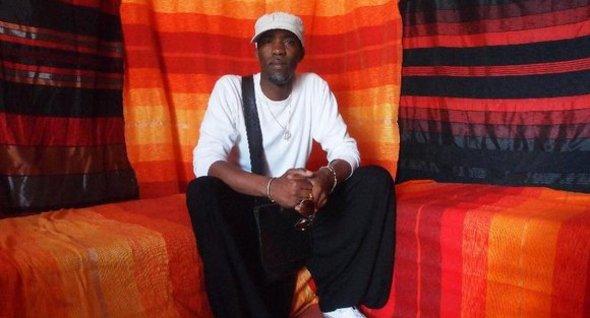 Hassan Boussou was born in Casablanca and grew up with the Gnawa tradition; although this music is a source of inspiration for his work, he and the Belgian members of his band also experiment with Western sounds

Kühn admits, however, that he isn't really into the whole spiritual side of things. The spirits invoked by the Gnawa in trance are things he would rather leave alone. He prefers to talk about how happy he is; playing the kind of music he enjoys, living on Ibiza in a house on a nature reserve, with its own recording studio, and with nothing to do all day but compose and improvise music. We say our farewells and go to pay for the tea we have been drinking … it costs more here than an entire meal elsewhere in Morocco.

The price of the tea is a sign of the increasingly commercialized nature of the festival. Back in 2001, it was predominantly local musicians performing in concerts all over the festival's three large and eight small stages. Back then, a tour of the city was a real journey of musical discovery. All of the concerts were free, and it seemed as if half Morocco had made its way to Essaouira. The Moroccan press called it the "Woodstock of Morocco".

Hassan Boussou, one of the Gnawa masters, explains to me at some length why it is that the number of stages and local performers continues to shrink, why the number of free concerts has been reduced to a minimum, and why places for those unable to afford tickets are falling, although ticket prices are rising: the costs just keep on increasing! I remind him of the fact that the Moroccan newspaper Al Massae has just announced an increase in the festival's budget from €1.06 to 1.105 million, and ask him what he thinks is happening to the money. He doesn't know; all he knows is that it is not going to the musicians.

The increasing commercialization of the event has led to a steep decline in the number of Moroccan visitors. The festival management is probably targeting a more affluent European audience now. But given the precariousness of the situation in the Arab world and the fact that Morocco seems to be linked to this situation in the minds of many Europeans, the number of European visitors is down on last year.

Meanwhile, the police have been clamping down harder than ever on the "dangerous" Moroccans who get too close to Europeans. At one of the few free concerts, I talk to a young Moroccan in the crowd. A short time later, he returns in the company of two police officers; he has been handcuffed. I am asked to check my rucksack to see if anything is missing. Nothing is. Nevertheless, I am advised to take better care of my possessions – there are a lot of dangerous thieves around, I am warned.

Home
Print
Newsletter
More on this topic
The Moroccan Fusion Singer Oum: ''I Am a Muslim, But I Make Decisions about My Life''Gnawa World Music Festival in Essaouira: A Kind of "Moroccan Woodstock"The Gnawa Festival in Essaouira: High on SpiritsThe Trance-scendental Brotherhood of the Gnawa: Religious Practice as a Therapeutic Act
Related Topics
Arab music, Musical worlds
All Topics

Tourists have been returning to Tunisia, Egypt and Morocco. But, given the global uncertainty caused by the Ukraine war, will the comeback be enough to save a struggling sector, ... END_OF_DOCUMENT_TOKEN_TO_BE_REPLACED

In Morocco, the bicycle is considered a poor man's means of transport. What's more, cycling tends to be a male-only affair. The Pikala bike initiative in Marrakesh seeks to change ... END_OF_DOCUMENT_TOKEN_TO_BE_REPLACED

END_OF_DOCUMENT_TOKEN_TO_BE_REPLACED
Social media
and networks
Subscribe to our
newsletter