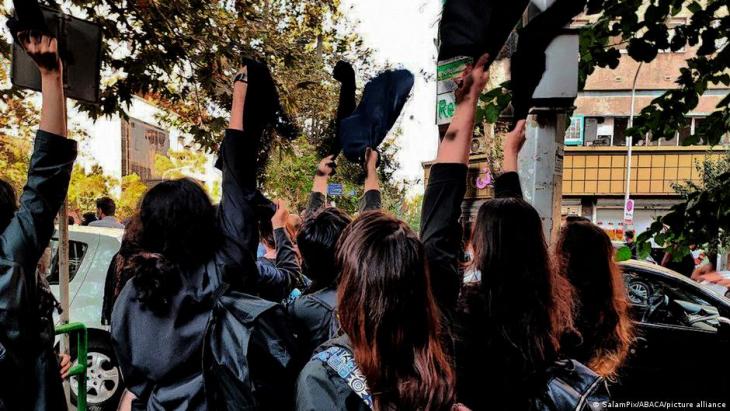 Political scientist and German-Iranian Ali Fathollah-Nejad discusses the protests in Iran and the long-term prospects for post-revolutionary political order. Interview by Michael Young

The ongoing protests in Iran are only the latest in a series of protests that have taken place during the past months and years. What does this tell us about the system in place in the country and its survival?

Ali Fathollah-Nejad: The Islamic Republic of Iran has been shaken by a tsunami of unrest over the last five years: nationwide uprisings against the regime, as well as thousands of social protests. Frustration with the regime is mounting and widespread, owing to the latter’s persistent inability to cater to the population’s most basic needs. The result is constant instability, with violent crackdowns following hot on the heels of the recurrent popular protests. This has not only imperilled the regime’s stability, but also its very survival. The political and security establishment know that the prime threat to the status quo originates from within the country, rather than from abroad.

This realisation came with the Dey protests at the end of 2017 and into 2018, which sent shockwaves through the elite. The November 2019 Aban protests were the de facto continuation. Both uprisings saw the lower classes taking to the streets en masse for the very first time. They have always been considered the regime’s grassroots support, loyal to the concept of an Islamic republic. During the Dey protests, 50,000 people demonstrated, while another 200,000 joined the Aban protests, according to the Interior Ministry. 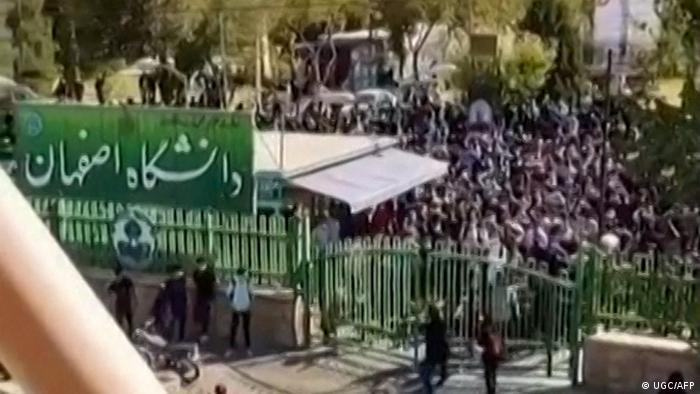 A broad cross-section of Iranian society had joined the uprising: "Women and young people are at the forefront, showing remarkable courage and resolve," says Fathollah-Nejad. "Mahsa Amini’s murder has hit a nerve among the lower and middle classes alike, accompanied by remarkable cross-ethnic solidarity and a strong university presence. Workers and celebrities alike are joining in. This has truly become a national revolt, posing a serious threat to the regime"

Both upheavals were initially sparked by socio-economic degradation but quickly turned political. The slogans targeted all aspects of the regime’s structure –the clerics and the Islamic Revolutionary Guard Corps, or IRGC, and both the hardline and reformist factions of the establishment – spreading to all corners of Iran like wildfire, engulfing about 100 cities and towns.

"Those in power unwilling to reform"

I have argued that these uprisings are the Iranian version of a “long-term revolutionary process”. They are reminiscent of what we saw in the Arab world, the so-called Arab Spring upheavals with their continuing waves. They are, likewise, driven by a combination of socio-economic misery and political authoritarianism, as well as an unwillingness by those in power to reform.

In recent years social groups across the spectrum have staged thousands of protests. In 2021 alone, the ACLED database (which doesn’t however include Persian sources) counted 4,000 protests – a record number since 2016 – and in the first half of 2022 more than 2,200 protests. This is just one indicator of the widespread dissatisfaction with conditions in Iran. These protests are driven by what I call the Islamic Republic’s “triple crisis” – socioeconomic, political, and ecological – of which the political crisis constitutes the centre of gravity. After all, Iran’s ruling oligarchy monopolises both political and economic power, and there is little likelihood of overcoming the country’s manifold crises without political change.

This situation has translated into an increasing frequency of protests: the 1999 student uprising, the 2009 Green Movement, the Dey and Aban protests, and where we find ourselves today. While the Dey and Aban street protests were not joined by key elements of the middle class, we are now witnessing the broadest social composition of any uprising so far. Women and young people are at the forefront, showing remarkable courage and resolve. Mahsa Amini’s murder has hit a nerve among the lower and middle classes alike, accompanied by remarkable cross-ethnic solidarity and a strong university presence. Workers and celebrities alike are joining in. This has truly become a national revolt, posing a serious threat to the regime, which explains the brutality of its response.

For anyone who thought the #IranProtests will be over in days, this is today, week 3, from Ferdowsi university, city of Mashahd, NE Iran. Women in middle, headscarf off, men cheering them from back as they chant for change: pic.twitter.com/VhnFsdB0ua

During the last two nationwide uprisings, an intersectional alliance was missing. Now, we are seeing it, and it is a process that has also been facilitated by the impoverishment of the middle class (the growing ranks of the “middle class poor”) over the last few years. The middle class no longer feels that stability at any cost necessarily serves its interests, faced as it is with high unemployment, especially among women, graduates, and the youth. As a result, “bread” and “freedom” issues have become inextricably linked.

In a recent article, Carnegie scholar Karim Sadjadpour was quoted as saying that the Islamic Republic of Iran has three remaining ideological pillars – Death to Israel, Death to America, and the hijab. Do you agree, and, if so, what does this tell us about the religious-cultural pillars, but also the fragility, of the regime?

Fathollah-Nejad: As usual, he is on point. One cannot imagine an Islamic Republic without these core tenets. Yet, a post-Khamenei Iran may, for the sake of regime durability, relax some of the religious-cultural restrictions that collide with general public sentiments, adapt to an increasingly secularised society, and accommodate widespread popular rejection of politicised religion and the ruling clergy.

How would you compare the cycle of protests taking place in Iran today to the protests that took place against Shah Mohammed Reza Pahlavi in the late 1970s? At the time, the authorities were caught in a cycle of protests from which they were unable to extract themselves, until the Shah fled. How have the protests under the Islamic Republic been different, leading to different outcomes?

Fathollah-Nejad: In the 1970s, Iran’s revolutionary movement was pluralistic and united in its opposition to the Shah. Also, a considerable factor in the Shah’s overthrow was that his foreign backers had largely abandoned him. The main difference between now and then, however, may be the level of public awareness. Today, the Internet, despite its negative tendencies, opens horizons that can be used to create a more informed public. The one major difference, though, is that the present regime’s willingness to use barbaric violence to hold on to power, despite all the odds, far outweighs the Shah regime’s brutality during its dying days.

The greatest hope lies in the fact that today many Iranians have an understanding of the importance of human rights – a result, not least, of unprecedented human rights violations during the more than forty-year rule of the Islamic Republic. There is also an understanding of the importance of women’s rights, which is on display today. In contrast, probably the single most important shortcoming of the pre-1979 revolutionary movement was the dominance of a facile anti-imperialist, anti-American zeitgeist that effectively marginalised any concerns for human or women’s rights and democracy.

There has been much speculation about who might succeed Ayatollah Ali Khamenei, who has been in poor health lately. Do you believe there is a succession plan is in place, and how might the ongoing protests in the country play into this?

Fathollah-Nejad: There are many unknowns so far, both regarding domestic forces and the position of foreign backers. Yet, we can assume that the IRGC is doing everything in its power to maintain its “full-spectrum dominance” in a post-Khamenei Iran, ideally with a weak successor as supreme leader who no longer holds the extraordinary powers that Khamenei has amassed. The power of the Shia clergy could well be reduced, translating into a system in which Iranian nationalism becomes the main ideology, superseding Shia nationalism and Islamism. However, there is also a split within the IRGC between those with Shia and secular leanings. In brief, Iran could turn into a de facto military dictatorship, with the present ideological mix of Islamism and nationalism tilting toward the latter, in other words toward nationalism. Moreover, the positioning of Tehran’s main external supporters, above all Russia, will be a significant factor.

Also, a post-Khamenei Iran may be more lenient regarding social restrictions, not unlike what is taking place in Saudi Arabia under Crown Prince Mohammed bin Salman. Yet, this doesn’t mean that popular opposition to a modified regime would be less strong, as Iranians have come to realise that the clergy and the IRGC are two equal evils. With that, the “long-term revolutionary process” could well continue in a post-Khamenei Iran.

Ali Fathollah-Nejad is a German-Iranian political scientist focusing on Iran, the Middle East and the post-unipolar world order. He is a McCloy Fellow on Global Trends of the American Council on Germany, exploring how trans-Atlantic foreign policy toward authoritarian states can reconcile interests and values. He is also an associate fellow with the American University of Beirut’s Issam Fares Institute for Public Policy and International Affairs, where he publishes a brief titled Iran in Focus. He is the author of the much-acclaimed book, Iran in an Emerging New World Order: From Ahmadinejad to Rouhani (2021),

When is it and when is it not acceptable to display a political banner at the World Cup in Qatar? The answer seems to depend largely on the political message, with fans ... END_OF_DOCUMENT_TOKEN_TO_BE_REPLACED

The Kurds are under attack from two sides: from Turkey, and from Iran. The situation in their territories in northern Iraq is becoming increasingly desperate. Birgit Svensson ... END_OF_DOCUMENT_TOKEN_TO_BE_REPLACED

Iranians do not want an Islam that interferes. They are fed up with a system that manipulates people with simple promises of salvation and anti-Western propaganda. Islamic ... END_OF_DOCUMENT_TOKEN_TO_BE_REPLACED

"The Voice of Dust and Ash" draws us into the life and times of Iranian maestro Mohammad Reza Shajarian with passion and joy, focusing on the man who stood, and still stands, for ... END_OF_DOCUMENT_TOKEN_TO_BE_REPLACED

November 2022 sees the Arab world firmly in the spotlight with the COP27 in Egypt and the FIFA World Cup in Qatar. Public trust in MENA governments is weak, thanks to their ... END_OF_DOCUMENT_TOKEN_TO_BE_REPLACED

In Iran, two famous actresses, Hengameh Ghaziani and Katayoun Riahi, were arrested recently. These days anyone who shows solidarity with the protesters is a target to be silenced ... END_OF_DOCUMENT_TOKEN_TO_BE_REPLACED
Author:
Ali Fathollah-Nejad
Date:
Mail:
Send via mail

END_OF_DOCUMENT_TOKEN_TO_BE_REPLACED
Social media
and networks
Subscribe to our
newsletter