Hosting major sports tournaments can confer prestige on a country, but in the case of Egypt, the 2021 Handball World Championship will do little to repair relations with either the United States, Italy, or the Arab Gulf states, argues James M. Dorsey

Egyptian general-turned president Abdul Fattah Al-Sisi sees the 2021 men’s handball world championship in Cairo and Alexandria as an opportunity to put his best foot forward at a time when Egypt’s relations with its closest regional and global partners are encountering substantial headwind.

Successful hosting of the championship, the first to involve 32 rather than 24 competing teams, would also serve to counter criticism of the government’s handling of the coronavirus pandemic. Egyptian health minister Hala Zayed recently admitted that many more Egyptians contracted the virus than the government has so far reported. A successful hosting would further put a crown in the feather of Egyptian-born International Handball Federation (IHF) president Hassan Moustafa.

Egypt has put strict pandemic-related precautionary heath measures in place for the tournament from the moment teams, officials, and journalists arrive at Cairo International Airport. The measures apply to training, lodging and media arrangements as well as the transport to and from hotels and the championship’s four designated match venues. Egypt is determined to ensure that the championship does not turn into a spreader of COVID-19.

That concern prompted the IHF and Egyptian authorities at the last minute to shelve a plan to allow fans into the four venues that include the Cairo Stadium Sports Hall, the New Capital Sports Hall in Egypt’s newly built desert capital east of Cairo, the Dr Hassan Moustafa Sports Hall in Giza, and the Borg Al Arab Sports Hall in Alexandria. 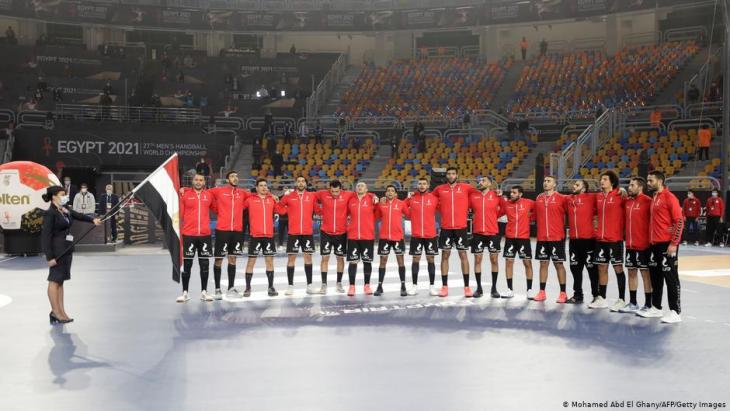 Putting prestige before the pandemic: Egypt is hosting the tournament even though it seems unable to meet the basic requirements of medical personnel who are on the frontline in the fight against coronavirus. Doctors and nurses protesting the high number of infections in their ranks because they lack access to sufficient personnel protection equipment are threatened with imprisonment if they fail to report to work, despite the risk to their lives. Symptomatic of Sisi’s brutal crackdown on any kind of criticism, several doctors have been arrested on terrorism charges for voicing their grievances

The IHF said the decision was taken "considering the current COVID-19 situation as well as concerns that have been raised, amongst others by the players themselves."

Critics charge that Egypt is hosting the tournament even though it seems unable to meet the basic requirements of medical personnel who are on the frontline of the fight against the pandemic. Doctors and nurses have protested against the high number of infections in their ranks because they lack access to sufficient personnel protection equipment and are threatened with imprisonment if they fail to report to work despite the risk to their lives.

Symptomatic of Sisi’s brutal crackdown on any kind of criticism, several doctors have been arrested on terrorism charges for voicing their grievances.

Aside from the fact that the impact of a handball tournament pales when compared to the prestige of hosting a mega-event like the World Cup or the Olympic Games, the handball tournament is unlikely to provide much of a fig leaf for Sisi’s hard-handed repression of anyone – save his sycophantic supporters – voicing an opinion.

Ten years after Egypt's January 25 revolution, many of those who led protests are either disillusioned or in jail. ... END_OF_DOCUMENT_TOKEN_TO_BE_REPLACED

Egypt has never been called to account for the murder of Giulio Regeni, nor for the numerous human rights violations committed by the Sisi regime. Focusing only on stability, ... END_OF_DOCUMENT_TOKEN_TO_BE_REPLACED

Ten years after the Tahrir square protests in Cairo, Egypt’s human rights record is disastrous. On the occasion of the anniversary of the 2011 revolution, several international ... END_OF_DOCUMENT_TOKEN_TO_BE_REPLACED

END_OF_DOCUMENT_TOKEN_TO_BE_REPLACED
Social media
and networks
Subscribe to our
newsletter