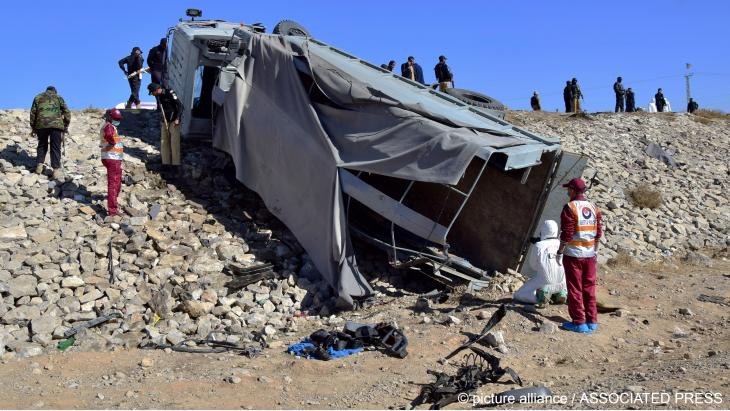 A suicide bomber blew himself up near a truck carrying police officers on their way to protect polio workers near Quetta, Pakistan, on Wednesday, killing a police officer and two civilians. The bombing also wounded 23 others, mostly policemen, officials said.

Ghulam Azfer Mehser, a senior police officer, said the attack happened as the policemen were heading to the polio workers, part of a nationwide vaccination drive launched on Monday.

The blast was so powerful that it toppled the truck carrying police officers into a ravine, he said, adding that the bombing also damaged a nearby car carrying members of a family. He said that the anti-polio campaign will continue even after the bombing.

Pakistani President Arif Alvi, Prime Minister Shehbaz Sharif and other officials in separate statements condemned the attack. It came a day after Pakistani Deputy Foreign Minister Hina Rabbani Khan travelled to Kabul to discuss a range of issues with the Afghan Taliban, including the latest threat from the local Taliban.

Pakistan wants Afghanistan's Taliban not to allow the Pakistani militants to use their soil to launch attacks inside this Islamic nation, which has witnessed scores of attacks. Most have been blamed on the Pakistani Taliban, who in a statement claimed responsibility for the bombing in Balochistan on Wednesday.

The Tehrik-e-Taliban Pakistan group, or TTP, said the attack in Balochistan targeted police to avenge the killing of their former spokesperson, Abdul Wali. He was widely known as Omar Khalid Khurasani and was killed in a bombing in Afghanistan's Paktika province in August. His death was a heavy blow to the group.

The attack on police came amid a spike in new polio cases among children. The latest vaccination campaign is the sixth such drive this year and will last for five days, aiming to inoculate children under the age of 5 in high-risk areas.

The drive is aimed at Islamabad and in the high-risk districts in eastern Punjab and southwestern Balochistan province, where Monday's attack took place. It killed at least two people, including a police officer and a child. A similar campaign will be launched in the northwest in the first week of December.

Pakistani authorities have been launching such campaigns regularly despite attacks on workers and police assigned to inoculation drives. Militants falsely claim that vaccination campaigns are a Western conspiracy to sterilise children. Since April, Pakistan has registered 20 new polio cases, which can cause severe paralysis in children.

Pakistan came close to eradicating polio last year, when only one case was reported. Currently, Pakistan and Afghanistan are the last two countries in which polio has not been eliminated.

Wednesday's bombing happened two days after The Pakistani Taliban ended a monthslong cease-fire with the government in Islamabad, ordering its fighters to resume attacks across the country, where scores of deadly attacks have been blamed on the insurgent group. In Monday's statement, the outlawed TTP group said it would end the five-month cease-fire after the army stepped up operations against the TTP.

Pakistan and the TTP had agreed to an indefinite cease-fire in May after talks in Afghanistan's capital. The Pakistani Taliban are a separate group but are allies of the Afghanistan Taliban, who seized power in Afghanistan more than a year ago as the U.S. and NATO troops were in the final stages of their pull-out. The Taliban takeover in Afghanistan emboldened TTP, whose top leaders and fighters are hiding in Afghanistan.

The latest violence comes a day after Pakistan's new military chief, Gen. Asim Munir, took command. Munir, a former spymaster, replaced Gen. Qamar Javed Bajwa after he retired from the post after a six-year term. Bajwa, during his tenure, had approved a series of operations against the militants in Balochistan, northwest and elsewhere in the country.

The latest attack also comes a day after the military claimed it killed 10 "terrorists" in a raid in the Hoshab district of Balochistan province. For nearly two decades Balochistan has been the scene of a low-level insurgency by separatists demanding independence from the central government in Islamabad. The government says it has quelled the insurgency, but violence in the province has persisted.    (AP)

END_OF_DOCUMENT_TOKEN_TO_BE_REPLACED
Social media
and networks
Subscribe to our
newsletter