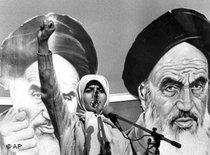 "Later, the overbearing shadow of Grand Ayatollah Khomeini settled over the entire era. What remained for posterity was an erroneous picture of a great liberation struggle, an image that is unfounded and unjust."

​​Even now, historians and sociologists find it hard to explain what actually happened in Iran in 1978/79. Within a matter of months, a largely unarmed movement toppled a regime in command of one of the world's best-equipped armies.

In the words of the American sociologist Charles Kurzman, it was "the unthinkable Revolution", and even in hindsight, it is impossible to interpret the causes clearly – neither from an economic, nor from a social or religious perspective.

Less bloody than the French Revolution

The one thing that is certain is that the Iranian Islamic Revolution was less brutal than its French and Russian predecessors, and also much more popular. The degree of active participation among the then 35 million Iranians made it a genuine people's revolution, one of the major uprisings in world history.

Historic upheaval: the Islamic Revolution in Iran was one of the most significant political uprisings in world history

Later, the overbearing shadow of Grand Ayatollah Khomeini settled over the entire era. What remained for posterity was an erroneous picture of a great liberation struggle, an image that is unfounded and unjust.

Astoundingly, that goes for both the West and Iran itself. On both sides, the struggle for liberation has been reduced in hindsight to a religious movement – with the religious motives then reduced to a mere handful of phrases. The two propaganda images are astonishingly alike – although their underlying motives are very different.

Rift between the generations

To start with, the awareness of history in Iran: there is a rift across the entire country, a rift between the generations. The population has doubled since the revolution; 70 percent of Iranians are under the age of thirty. And for many representatives of this large, youthful majority, it is impossible to understand what their parents were so passionate about. The government may be wooing the young generation with Bluetooth technology as part of its thirtieth anniversary celebrations – but only few of them are joining in whole-heartedly.

Many older Iranians, on the other hand, say the months of the revolution were the best time of their lives. They talk about being high on freedom and hope, a feeling that overpowered every one of them: "I went to the demonstrations because everyone was going. I went on strike because everyone was striking."

Even desertion was a mass phenomenon, and many young civilians shaved their heads in solidarity to help the deserters avoid detection with their striking military haircuts.

Today, the former revolutionaries feel left alone with their memories. They have lost their own biographies, been doubly dispossessed, so to speak: firstly by the everyday experience of an Islamic Republic that very few of them ever wanted in its current form, but for which the revolution generation played midwife, and secondly by the constant look of reproach in the eyes of their children.

​​These children know surprisingly little about their parents' motivations. There is no oral history in today's Iran. At school, children learn the names and dates of the revolution by heart, implanting a clichéd picture: the Shah was toppled because everyone wanted Islam.

Saturated with slogans, many of the young generation can't see that their parents, aunts and uncles were minor heroes for a few days of their lives. At a discussion with students, privately arranged, half of those present said that their parents' lives were better than their own, especially their youth under the Shah.

When critical questions are asked about the revolution in Iranian schools, teachers tend to sidestep the issue and talk about the war, the eight-year war with its terrible losses, which began in

By the end, the two states each mourned half a million dead. The formation of the young Islamic Republic, its ideology and symbolism are indelibly linked with this war.

Revolution meant rebellion, war meant obedience. Nowhere in the official national remembrance are the sudden freedom, awakening and diversity of the revolutionary movement celebrated. The beauty of the revolution has only survived in private memories, gone into hibernation and internal exile.

A generation of sceptics

In many countries, generational conflicts herald the transition to a renewal of society. In this case though, the rift between old and young Iran marks only an alarming ideological vacuum. The young experience their elders as an impotent generation, a failed generation.

Around many a dinner table, the older family members don't even defend themselves against the accusations from the mouths of babes, falling into resigned silence. In this fatherless (and motherless) society, a deeply sceptical generation has grown up.

Some young people give the impression of an almost shocking inability to imagine prompting a positive change within Iran through their own actions.

"Even today, most Western media reduce the revolution solely to Khomeini's suggestive power: the only imaginable political Islam is a cult of personality; the people can only be fanaticised followers"

​​In the West, 1979 saw the dawning of a new Islamophobia, following a fleeting moment of fascination. Khomeini seemed the ideal hate-figure; in popular parlance, the word "Ayatollah" became a synonym for a dangerous madman.

Even today, most Western media reduce the revolution solely to Khomeini's suggestive power: the only imaginable political Islam is a cult of personality; the people can only be fanaticised followers. Media reports in 1979 set a principle still in place today: disregard of Muslims as citizens and active, thinking individuals.

Ask the revolutionaries of yesteryear who inspired them and the same name will come up again and again: Ali Shariati, a young Iranian sociologist with a doctorate from the Sorbonne, a colourful utopianist, immensely popular. His message, which won over entire school classes to Islam, was essentially analogous with earlier protests in the West: Down with musty scholarly Shi'a traditions! Down with religious subservience! Redemption not through ritual self-castigation but through struggle, critique and enlightenment! Shariati propagated a "religion of protest", a "life-affirming, powerful, just" Islam.

All that sounds more familiar now than it did then. Shariati was a forerunner; he picked up what was in the air: the need for identity, for an Islam that rebels both against local despotism and against Western dominance. In many Islamic countries, movements still revolve around this dual axis today.

1979 was the year of a Muslim "Yes, we can!" An Islam-inspired people's revolution toppled a guardian of Western interests. The worldwide Islamic reawakening had begun beforehand, but the pictures of US diplomats taken hostage had an effect that is almost inconceivable today, with America incomparably weaker.

The Islamic Republic has not reached its goal of achieving social justice: street children in Teheran

​​But the slogan of the revolution in 1979 was "Neither East nor West!" and it really did herald the advent of a new and multi-polar world. The Western fear of a wildfire of Islamic revolutions was dreadfully exaggerated, but it did have a rational core: the justified fear of its own historically unavoidable loss of influence.

External hostility prompts internal isolation – Western policy has often unintentionally reinforced the regime in Teheran. And it has generated a sentiment among the mass of Iranians, who have a long tradition of anti-colonial feeling, not entirely dissimilar to that before the revolution: outside forces still have the audacity to want to define what is Iranian.

The Islamic Revolution has ultimately remained a singular event, a national phenomenon, more Iranian than first thought and not even an object of imitation for other Shi'a Muslims.

The Islamic Republic has not fulfilled the hope of social justice. Nevertheless, the calls for justice by millions of Muslims around the world are still projected onto Islam, as is the search for an alternative, non-Western modern way of life. Many in the West fail to understand that, just as they have failed to understand the Iranian Revolution to this day.

Charlotte Wiedemann is a freelance author and journalist who writes for a number of German newspapers including die Zeit and the Süddeutsche Zeitung. Her book Ihr wisst nichts über uns. Meine Reisen durch einen unbekannten Islam (You know nothing about us: my travels through an unknown Islam) was recently published by Herder-Verlag.

Iran
The Shattered Illusions of the Revolution
The political system in Iran remains ossified even after 25 years of the revolution. As Ali Sadrzadeh reports, it is not only young Iranians who do not believe that any real reforms will be made under the guardianship of the jurisconsult, some members of the clergy don't either.

Analysis Faraj Sarkohi
The Gulf between Population and Opposition
One of the greatest successes of the Islamic Republic has been its ability to violently suppress the Iranian opposition. This triumph, however, would not have been possible without the assistance of the opposition itself, says Faraj Sarkohi

END_OF_DOCUMENT_TOKEN_TO_BE_REPLACED
Social media
and networks
Subscribe to our
newsletter