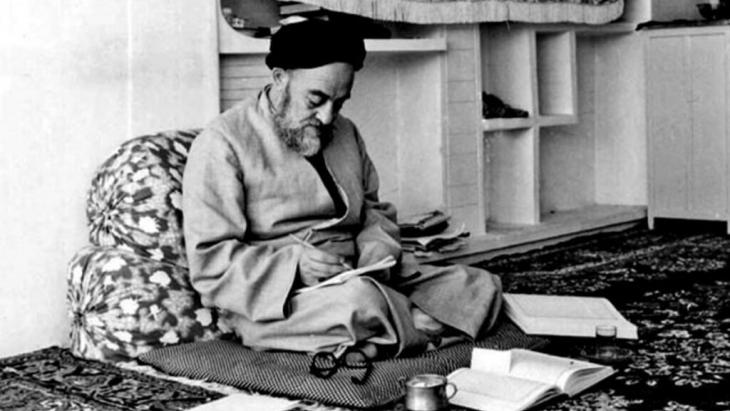 Right up until his death, Allameh Tabatabai dedicated himself to the revival of Shia Islam’s intellectual traditions. But few in the West have even heard of this exceptional philosopher. A portrait by Marian Brehmer

"The message of Shia Islam can be summed up in a single phrase: know God," Allameh Sayyid Mohammad Hossein Tabatabai is reputed to have said. This statement may come as a surprise – after all, the Shia mystic is practically unknown in the West. Allameh Tabatabai ("Allameh" approximately translates as "great scholar") was one of the most significant Iranian mystics and philosophers of the modern era – possibly even the greatest to have come out of Persia in the last century.

Today, the Allameh Tabatabayi University in Tehran, founded in 1984 and the largest faculty for humanities and social sciences in the country, preserves the memory of the Shia scholar. This November sees the fortieth anniversary of his death. And yet hardly anything about the thinker’s work is available to Western readers.

One explanation for this might be that, for a long time, the Sunni movements in Islamic mysticism formed the primary focus of western research into Islam. In part, this is because Sunnis were the Muslims with whom Europeans first came into contact on the borders of their continent, whether in the Maghreb or the Ottoman Empire. It was only through the work of the French metaphysical philosopher and Iranologist Henry Corbin (1903-1978) that western researchers in the mid-20th century became familiar with Shia spiritual teachings.

One of Corbin’s most important mentors was Tabatabai, whose wide-ranging life’s work is reminiscent of what universal scholars achieved in the golden age of the Islamic humanities. Tabatabai was born in 1903, in Tabriz, western Iran, into a family of sayyids — descendants of the Prophet – a family that had already produced more than 14 generations of notable theologians and thinkers.

In Tabriz, Tabatabai learned Arabic and the principles of Shia theology. He went on to study at the renowned Shia university of Najaf, which traditionally focused on the fiqh, Islamic jurisprudence. With this education, Tabatabai was predestined to make a career for himself as a Shia legal scholar. But he was to forge a different path. 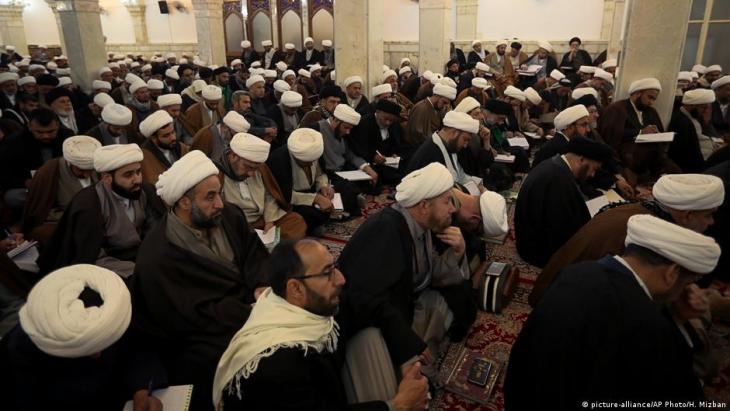 Shia students attend a seminar at the "Hawza" high school in Najaf. Shia mysticism is virtually unknown in the West, as is Allameh Tabatabayi, one of the most significant Iranian mystics and philosophers of the modern era – possibly even the greatest to have come out of Persia in the last century. This November sees the fortieth anniversary of his death. And yet hardly anything about the thinker’s work is available to Western readers

During his time at university, it became clear where Tabatabai’s passion lay. He immersed himself in Islamic philosophy and the mystic intellectual tradition of Shia, which rests in large part on the thought of Mulla Sadra. This Persian philosopher, whose work Tabatabai studied intensively, was once described by the American philosophy professor Oliver Leaman as the Muslim world’s most important and influential philosopher of the last four hundred years.

But a particularly formative influence for Tabatabai was his spiritual training under his cousin Mirza Qadi, a man 35 years his senior, who was also a Shia scholar in Najaf. Qadi inducted Tabatabai into practical gnosis, the “direct scholarship” in which knowledge is gained through immediate experience. In the course of this mystical education, at the centre of which stood spiritual practice with long periods of fasting, prayer and silence, Tabatabai found he was able to access deeper dimensions of those works that he had only studied mentally before that point — texts such as Ibn Arabi’s Fusus al-Hikam, for example, one of the central masterworks of Sufism.

Tabatabai came to regard inner exploration as the core of religion: “The knowledge of God and the knowledge of the self are not separate from one another; a person who knows his own metaphoric existence has recognised the true existence of God.”

At the age of 31, Tabatabai returned to Tabriz, where he taught for a few years. Later, after the turmoil of the Second World War, he settled in Qom, which remains the centre of religious study in Iran to this day. In Qom, Tabatabai began to teach Koran exegesis and traditional Islamic philosophy. He strove to lead young students, whose familiarity with contemporary European ways of thinking had brought them into conflict with Islamic tradition, back to the intellectual origins of their own culture.

Tabatabai was hugely inspired by the great Arab mystic Ibn Arabi (1165 -1240) and his writing "Fusus al-Hikam" – 'the wisdom of the prophets' – a central masterpiece of Sufism. The Shia scholar's approach went beyond theory to practical experience. Engaging in long periods of fasting, prayer and silence, Tabatabai found he was able to access deeper dimensions of those works that he had previously only studied mentally. He understood this inner exploration to be the core of religion: “The knowledge of God and the knowledge of the self are not separate from one another; a person who knows his own metaphoric existence has recognised the true existence of God”

With this aim in mind, Tabatabai formed a study circle that sought to develop arguments that would refute western materialism and ideologies of the modern world, including Marxism. A few members of this circle would go on to play important roles in the Islamic Revolution of 1979.

With his focus on traditional philosophy, Tabatabai was an exceptional figure in Qom in the mid-20th century. Reports by his contemporaries also highlight his extraordinary modesty: for instance, Tabatabai tried to avoid using the pronoun “I” in both Persian and Arabic. He also refused to lead others in prayer. If anyone made to kiss his hand – a customary gesture of respect to clerics – he would quickly pull it back into the sleeve of his robe.

Hossein Nasr, Professor of Islamic Studies at George Washington University, who sometimes served as a translator for Tabatabai, recalls:

“His magnetic personality and spiritual presence soon attracted some of the most intelligent and competent of the students to him (…) I still have a vivid memory of some of the sessions of his public lectures in one of the mosque-madrassahs of Qum where nearly four hundred students sat at his feet to absorb his wisdom.”

Tabatabai also led a weekly study circle in Tehran, in which the Frenchman Henry Corbin, who was then head of the French Institute for Iranian Studies, participated alongside a group of Iranian intellectuals. In addition to the discussion of spiritual and intellectual questions, the group studied mystical texts from other traditions, and compared them with their own. They included the Tao Te Ching, the Upanishads and the Gospel of John.

Allameh Tabatabai wrote more than forty books. His crowning achievement is the Tafsir al-Mizan, a twenty-volume Koran commentary written in Arabic, which numerous people have described as a divinely inspired work. The Tafsir al-Mizan follows the method of “interpreting the Koran through the Koran”, as Tabatabai describes it.

Letting the Koran speak for itself

At the heart of this method of reading lies the realisation that each part of the Koran can serve to reveal the meaning of the holy book as a whole. In his commentary, Tabatabai makes an effort to investigate the words of every verse with precision, and to compare them with other verses whose content is similar. In this way, the Koran is to be allowed to speak for itself, and the commentator fades into the background, without projecting his own agendas or concepts onto the text.

Tabatabai did not involve himself in the political struggle of Shia that led to the toppling of the Shah and the establishment of the Islamic Republic. His writings do contain meditations on forms of Islamic government, but these are of a philosophical nature, and do not pursue any political agenda. By the time of the Revolution, Tabatabai himself was already too weak to play an active part – towards the end of his life, he withdrew increasingly into prayer and meditation. Some of his pupils, however, including Ayatollah Morteza Motahhari, were on the front lines of the Revolution, and lost their lives in political assassinations.

Tabatabai’s influence, then, is spiritual rather than political; his thought had a lasting influence on traditional and modern intellectual circles in Iran. Tabatabai saw his task as being to form a new intellectual elite among the educated classes, one that was familiar with the roots of Islamic intellectualism and had arguments with which to combat the modern world and its materialistic philosophy of progress.

Tabatabai died in 1981, in a circle of his closest pupils, and is buried in the Fatima Masumeh shrine, Qom’s central Shia holy site. In the face of the heated political climate of recent decades, Tabatabai’s legacy now seems like a relic from another era. His life’s work, as Nasr argues, can give us an impression of the tradition of mystic intellectualism that has existed in Shia Islam for centuries: “He stands as a symbol of what is most permanent in the long tradition of Islamic scholarship and science (…). He exemplifies in his person the nobility, humility and quest after truth which have characterised the finest Muslim scholars over the ages.”

Russia and Israel are pursuing a common interest in Syria: they both want to combat Iranian expansionism. By Markus Bickel END_OF_DOCUMENT_TOKEN_TO_BE_REPLACED

Despite Syria's lengthy civil war, dictator Bashar al-Assad is now being courted by many governments in the Middle East as if nothing ever happened. The reasons for this vary. By ... END_OF_DOCUMENT_TOKEN_TO_BE_REPLACED

Journalists are under fire from all factions in the Yemen conflict. Rasha Abdullah al-Harazi, nine months pregnant, recently died in a car bomb attack in Aden, her husband barely ... END_OF_DOCUMENT_TOKEN_TO_BE_REPLACED

With authoritarianism once more gaining ground in the Middle East and North Africa, the European Council on Foreign Relations explores how European diplomats can be more effective ... END_OF_DOCUMENT_TOKEN_TO_BE_REPLACED

It is getting hotter and hotter in Iraq. Fifty degrees or more is no longer a rarity. The state between the Euphrates and Tigris rivers is now one of the hottest countries on ... END_OF_DOCUMENT_TOKEN_TO_BE_REPLACED
Author:
Marian Brehmer
Date:
Mail:
Send via mail

END_OF_DOCUMENT_TOKEN_TO_BE_REPLACED
Social media
and networks
Subscribe to our
newsletter