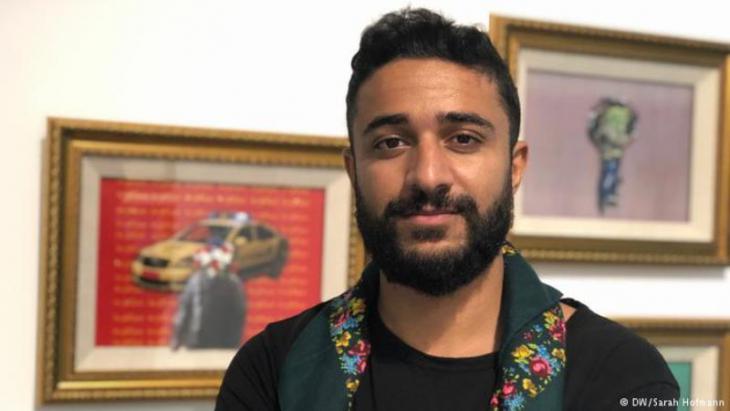 The fourth Qalandiya International exhibition opens with shows in the West Bank and Gaza, but also in Lebanon and Germany, crossing borders the Palestinians themselves can't pass. By Sarah Judith Hofmann

Mahdi Baraghithi has draped a shawl reminiscent of traditional Palestinian embroidery over his shoulders, black with brightly coloured flowers. The motif is immediately recognisable in his collages, displayed in ornate gold frames on the walls of Birzeit University, north of Ramallah in the West Bank.

His artwork is part of the Qalandiya International art exhibitions that open in various towns in Palestine in October. The culture and art festival is named after the Israeli Qalandiya checkpoint, the largest in the West Bank. The frames are a bit tacky, Baraghithi admits, but he adds that many Palestinian refugees have similar frames on their walls, "with paintings of Jerusalem and the other lost cities of Palestine" – paintings of places people yearn for, he says and "that are out of reach."

Mahdi Baraghithi's family are refugees from Lydda, a city in Israel officially named Lod. Israeli troops captured the town in the 1948 Arab-Israeli war, killed hundreds of Palestinians and ousted the Arab population. Lydda stands for the trauma of the Nakba, as Palestinians call the 1948 events. Part of the Birzeit exhibition is dedicated to this city: "Lydda – A Garden Dis-remembered."

A third-generation refugee, the 27-year-old artist has never set foot in Lydda. He lives in Ramallah and it is difficult for a resident of the Israeli-occupied West Bank to get permission to cross the border to Israel. Baraghithi is not even trying to obtain one. He doesn't want to lose his idealised perception of the lost city by confronting it with reality. For years, he has been collecting everything he could find on Lydda's past and present: family photos, newspaper clippings and social media posts. 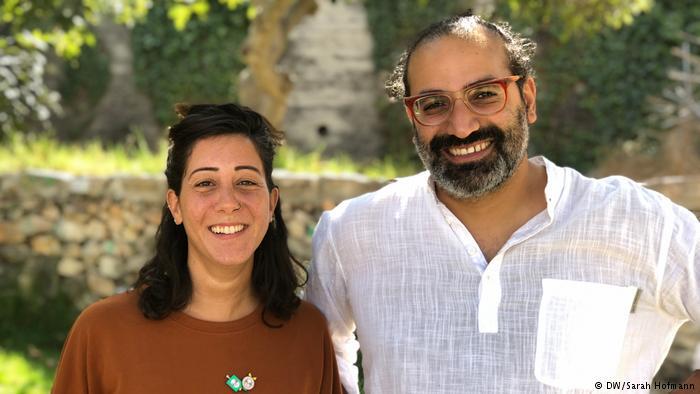 Solidarity among artists: "Art has the power to unite. Art wants to present a different form of politics and in such fragmented times, culture argues that yes, there is solidarity among Palestinians," states Khalili. It's really no coincidence at all that Mahdi Baraghithi wore a replica of a Palestinian embroidered shawl at the opening ceremony this week. For him, one thing is clear: Palestinians "are one people"

In his collages, he adds Palestinian symbols like the key, which stands for the exiles' return to their homes, photos of motorcycles, bulldozers, men in macho poses. Their faces are hidden by flowers. Mahdi Baraghithi presents Lydda as he imagines the city to be and he shows how not having a home has affected the Palestinian people; how society puts pressure on young men like himself to stand up as freedom fighters. "You have to liberate your country, that's what they teach us," he explains. "That makes for a lot of pressure."

Extending its scope in solidarity

Every two years since 2012, Palestinian museums and culture institutes organise and stage art exhibitions aimed at bringing culture to towns with large Palestinian populations. Throughout October this year, there will be shows and events in towns in the West Bank and Gaza, in cities in Israel with large Arab populations – and even in faraway New York, London and the German city of Dusseldorf.

"The curators organised these shows mainly via Skype," says Yazan Khalili, head of the Khalil Sakanini culture centre in Ramallah, which is one of the nine Palestinian culture organisations participating in Qalandiya International. "It was a virtual round table," he adds: Palestinians from Ramallah or Beirut can't go to Haifa without Israeli approval and very few are allowed to go to Jerusalem. The Gaza curators couldn't even travel to the West Bank.

Gaza has been virtually closed off since the Islamic Hamas took power more than 10 years ago. Gaza and the West Bank are divided; physically, since Israel lies between them and politically, because of the deep split between Hamas and the more moderate Fatah, the Palestinian party that rules the West Bank. It's quite an achievement that artists and others involved with culture in Gaza and the West Bank are even talking, the curators agree – and fittingly, solidarity is the Qalandiya International theme this year.

"Art has the power to unite"

Observers, however, wonder whether solidarity among Palestinians still exists. People seem to think they are showing solidarity even if they only post a photo or a link on Facebook, argues Reem Shadid, co-curator of the project. It seems that the kind of solidarity that made people take action and that liberated entire peoples is a thing of the past. "We have to discuss new forms of solidarity," says Shadid.

All the same, solidarity with Palestine is the focus in performances and panel discussions in New York, Dusseldorf and London. Qalandiya International certainly sees itself as a manifesto of solidarity among artists, who unlike the Hamas and Fatah political factions actually communicate and help one another.

"Art has the power to unite," states Khalili. "Art wants to present a different form of politics and in such fragmented times, culture argues that yes, there is solidarity among Palestinians." That is how it has been for decades, he adds. Palestinians started demonstrating unity right after 1948 with folk songs, traditional tales and embroidery, Khalili says.

It's really no coincidence at all that Mahdi Baraghithi wore a replica of a Palestinian embroidered shawl at the opening ceremony this week. For him, one thing is clear: Palestinians "are one people."

Education for girls and women is still possible in Afghanistan, says Reinhard Eroes of the Kinderhilfe Afghanistan initiative. In interview with Elisa Rheinheimer, he talks about ... END_OF_DOCUMENT_TOKEN_TO_BE_REPLACED

We are in favour of human rights. But One Love armbands are self-righteous and ignore some fundamental issues. Stefan Buchen examines the debate surrounding the World Cup in Qatar END_OF_DOCUMENT_TOKEN_TO_BE_REPLACED

In Doha, Arabs from Morocco, Tunisia, Egypt and Algeria are gathering to celebrate the first ever FIFA World Cup to be held on Arab soil. The criticism from Europe? Over the top, ... END_OF_DOCUMENT_TOKEN_TO_BE_REPLACED

Canan Topcu came from Turkey to Germany as a child. In her essay, she describes how bothered she was by the racism she encountered in her country of origin when she travelled ... END_OF_DOCUMENT_TOKEN_TO_BE_REPLACED

All organisers use major sporting events like this year’s FIFA World Cup in Qatar primarily to advertise their country and promote a slick public image. This is not something we ... END_OF_DOCUMENT_TOKEN_TO_BE_REPLACED

A leading light of Israeli theatre, Ofir Henig has directed the Israel Festival and is the only female director to have been awarded the Israel Theatre Prize. These days, however ... END_OF_DOCUMENT_TOKEN_TO_BE_REPLACED
Author:
Sarah Judith Hofmann
Date:
Mail:
Send via mail

END_OF_DOCUMENT_TOKEN_TO_BE_REPLACED
Social media
and networks
Subscribe to our
newsletter