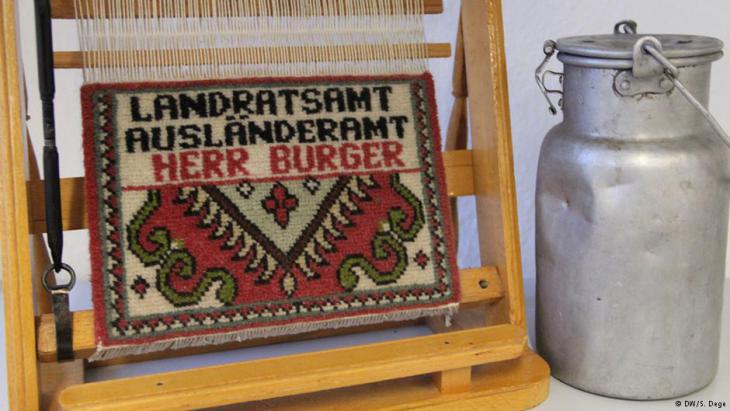 DOMiD, the Documentation Center and Museum of Migration in Germany, has been collecting stories and personal objects from migrants for the past 25 years. Now, the association feels that the time has come to open a central museum of migration in Germany. By Stefan Dege

Men, women and children line the corridor. Their life-sized portraits were captured by the Cologne-based photographer Guenay Ulutuncok and grouped in families along the walls. Every age group is represented. Their proximity or distance to mainstream German society can easily be discerned by such details as posture, facial expression and clothing. "The exhibition is so illustrative that schools like to borrow it," says Robert Fuchs, "in order to show how integration in Germany works."

Several times a month, the friendly young man guides visitors through the rooms of DOMiD. Fuchs is a historian and works for the Documentation Center and Museum of Migration in Germany.

Fuchs is responsible for public relations. The association employs a permanent staff of five, mostly academics, and an additional freelance project staff of seven. Funding is provided by the city of Cologne and the state of North Rhine-Westphalia.

In 1990, Turkish immigrants founded DOMiD, assembling the first collection of mementoes and relics: suitcases, train tickets, radios, newspapers, countless photographs and much, much more. The objects tell stories of departure to a foreign land, life in Germany and the arrival in a new world. "People wanted and still want to tell their stories," asserts Fuchs. For this reason, DOMiD has conducted thousands of interviews with immigrants.

Tinted transparent sheets are hung in front of the windows to dim the incoming light. The historian leads visitors into the "inner sanctum", the depository. The door slams shut behind him. The fluorescent tubes flicker on and throw their pale light on the metre-long grey metal shelves, which are overflowing with objects wrapped in plastic.

A stamp-sized paper label hangs from every item, just like in the storeroom of a police station. The inventory number refers to the object's history, which is electronically stored on computer. Journalists and scholars come here regularly to conduct research. They then sit in the association's small, yet excellent specialised library, where the vast quantities of "grey literature", non-commercial or self-published documents, are stored. 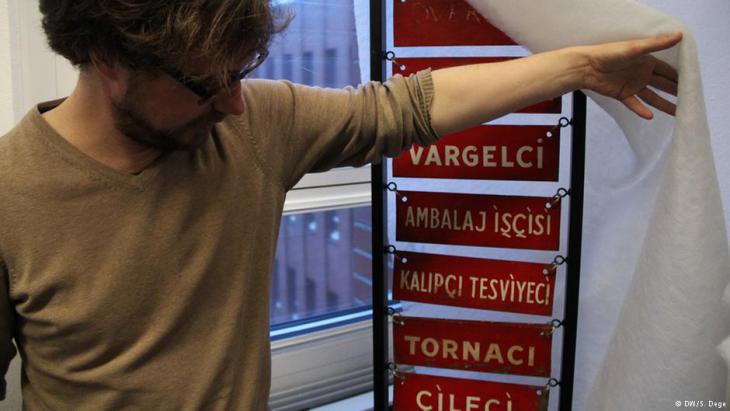 "This is the bonnet of a Korean nurse." Fuchs carefully reaches into the shelf. The bonnet is also wrapped in transparent foil in order to protect it from dust and UV light. The young South Korean, who once wore it, came to Germany in the 1970s. At the time, there was a shortage of qualified nurses. However, she soon came to regret her decision. "Nursing in South Korea is a much more respected profession than here in Germany," explains Fuchs. "And she wasn't even allowed to wear her bonnet." What many people don't know is that in addition to nurses, many Korean miners were also recruited to work in Germany. These and other episodes in the history of migration to Germany can be found in DOMiD's many publications.

The tour leaves the "Plastic Material Room" and heads directly to the "Metal and Electronics" depot. Fuchs proudly lifts the plastic covering from a man-sized signpost. Forty years ago, it was used by German companies in Istanbul to advertise for Turkish labourers. "Tornaci, Cileci, Dokumaci" is printed on the bright red enamel sign plates. Fuchs, in his role as historian, is particularly proud of this item, "because it is a wonderful example of transnational connections." These connections were also promoted by German recruitment offices in countries like Portugal, Greece and South Korea.

At first, many immigrants maintained a link to their homeland through the media. Whoever could afford to do so, acquired a multi-band radio with international reception. Such a radio, among many other objects owned by the Turkish family Genc, is now stored on the depository shelf. In 1993, the family was the victim of an arson attack in Solingen, in which five people died. Volunteers brought the receiver to the emergency accommodation after the family's house went up in flames. "This shows the large degree of trust that our association enjoys among immigrants," believes Fuchs. What cannot be ignored, as is evident in this particular case, is that xenophobia is also part of the history of migration.

Many objects here once played a key role in the everyday life of migrants. For example, there is three-piece shoeshine stand made of gleaming yellow brass. A Turkish migrant in Berlin wanted to use it to attract customers. His main obstacle was the lack of a work permit. In the end, it was Eberhard Diepgen, the mayor of Berlin at the time, who personally handed him the sought-after document. The man then advertised himself as "Berlin's only Oriental shoeshine master" and set up his stand on Kurfurstendamm, one of the city's main arteries.

A few doors further on, the tour reaches the "Flat Goods" depot. This is the storage area for posters, brochures, newspapers, rare magazines, records, photographs and many music cassettes. A specialist is sorting through and archiving cutout newspaper articles. Among her treasures are copies of a Sardinian magazine in which the regional government of the Mediterranean island hoped to provide emigrants "with tips and suggestions for living abroad." 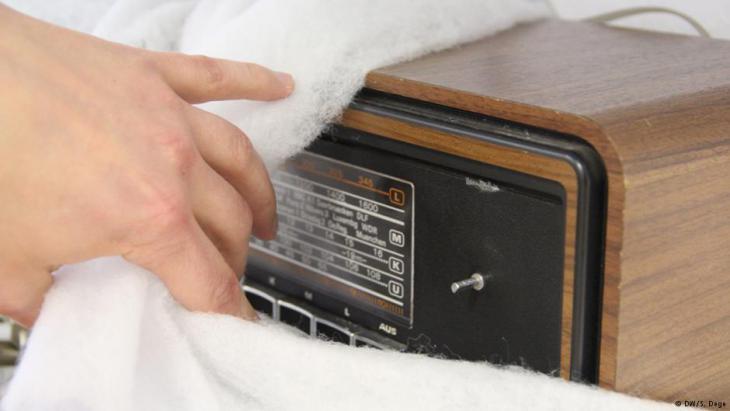 Tragic relic from a dark chapter in the history of migration to Germany: the historian Robert Fuchs presents the radio that belonged to the Turkish family Genc, which was the victim of an arson attack perpetrated by right-wing extremists in Solingen in the early 1990s. Five people were killed in the attack

Many immigrants have left their belongings to the association. They are piled up in the depository, and much has yet to be processed. A sweet and dusty odour pervades the room. The air conditioner whirs and hums, as if it is the background music to the collected stories of the migrants. Among the "flat goods" is a collection of "cassette letters". Guest workers recorded their words on cassette tapes and sent the spoken messages home. Their children answered in turn with tales of their lives with their grandparents. "Facebook, Skype and WhatsApp didn't exist then," says Fuchs. "Communicating with loved ones back home was much more difficult than it is today."

The sound of a coffee machine can be heard in the background. The association headquarters of DOMiD has all the charm of a tax office, although it is located in Ehrenfeld, a multicultural district of Cologne. Yet things could change soon. After years of collecting, preserving and conducting research, the association has now gotten serious with its idea of establishing a museum. On 20 April, it hosted a large press conference to kick off the drive for a central Migration Museum in Germany.

Germany as a country of immigration

The debate continues. "Germany today is what and how it is because of immigration," states Fuchs. Whether it is music, art, cuisine or the work environment, migrants have changed this country, and this is what the association aims to show in the planned museum. "Where is the input and what has developed as a result?" The goal of the museum is to present migration as a normal phenomenon. Germany is simply following the example of France and the USA. In both of these countries, there are already similar museums, and migration is one of the main issues in politics. "That would prove beneficial for Germany as well," believes Fuchs.

The association is currently looking for a location for its museum. It has not yet been decided where it should be built. "It should be a city that is characterised by migration," says Fuchs, "and also one that can provide us with sufficient support." Berlin and Stuttgart are being considered, as well as, of course, Cologne.

Until then, the photographed immigrants and their descendants will stand guard in the corridors of DOMiD. On display on the fourth storey of the district city hall of Cologne-Ehrenfeld, however, they give the impression of being the joyful guardians of recent German history.

Home
Print
Newsletter
More on this topic
The EU and migration: Migration as an opportunity, not a threatImmigration and the new class divide: Feeding on people's grievancesStudy on attitudes in "Post-migrant Germany": Do you love Germany?The new face of the nightly news: Pinar Atalay – not just the token migrant
Related Topics
Art, Immigration, Integration in Germany, Islam in Germany, Migration in Germany, Muslims in the West
All Topics

A new exhibition, "Syria – Against Forgetting", at Cologne’s Rautenstrauch-Joest-Museum focuses on Syria's artistic and cultural heritage and pays tribute to the country before ... END_OF_DOCUMENT_TOKEN_TO_BE_REPLACED

Madrid's about-face on the Western Sahara conflict has enraged Algeria. Trade relations have been frozen unilaterally and a cut in gas supplies to Europe could be in the pipeline ... END_OF_DOCUMENT_TOKEN_TO_BE_REPLACED

Yazan Khalili is spokesman for The Question of Funding, a collective of artists taking part in the leading German contemporary art festival Documenta 15. Here, he responds to ... END_OF_DOCUMENT_TOKEN_TO_BE_REPLACED

Mourad al-Marouai was just nine when a landmine killed him on a beach in war-torn Yemen, a tragedy that will haunt his family forever. After a swim, the little boy "suddenly ... END_OF_DOCUMENT_TOKEN_TO_BE_REPLACED

This year’s Morgenland Festival opened with the premiere of Kinan Azmeh’s musical theatre piece, “Songs for Days to Come”, based on fifteen poems by contemporary Syrian poets. ... END_OF_DOCUMENT_TOKEN_TO_BE_REPLACED

A ceasefire has been in effect in Libya for the past year and a half. Yet after Russia's attack on Ukraine, another proxy war looms in Africa's most oil-rich country. Mirco ... END_OF_DOCUMENT_TOKEN_TO_BE_REPLACED
Author:
Stefan Dege
Date:
Mail:
Send via mail

END_OF_DOCUMENT_TOKEN_TO_BE_REPLACED
Social media
and networks
Subscribe to our
newsletter