When they founded their Christian-Muslim family, the Dreessens had no reference points. But they encountered plenty of resistance from relatives. At home, there was more heated discussion over how to bring up the children than on the subject of faith. These days, things are much more relaxed. By Hedwig Gafga

At the time of their marriage, the Dreessens had no one to give them any ideas as to how a Christian-Muslim family might look, and both Church and Mosque were sceptical of such a union

​​ The prospects for this marriage were hardly favourable. When a friend, acting on behalf of Thomas Dreessen, officially sought permission from the Turkish father for his daughter's hand, the father turned pale and the daughter made a hasty exit through the back door. She went to ground for a few weeks, staying at a girlfriend's house. The family wanted to prevent her from entering into a marriage with a Christian German at all costs. When the couple told an Imam of their marriage plans, he warned: "Your children will go to hell." Many of the couple's friends, both German and Turkish, held a sceptical view of the relationship.

There's a door for every wall

"Do you like Turkish tea?" asks 56-year-old Thomas Dreessen, a theologian with a round face, greyish-black beard and friendly brown eyes behind a pair of horn-rimmed glasses. His wife Müzeyyen, aged 48, pours out the tea into small glasses. Her short black hair has a dark-reddish shine. She's wearing an apron over a T-shirt and grey trousers. There's a photograph behind her of the couple's three children, their heads together, and there's another family portrait right opposite, depicting parents and children standing close together. More than 25 years have passed since the dramatic events that accompanied their engagement and marriage. Both the older children are in education, youngest daughter Yasmin still lives at home. Müzeyyen Dreessen wants to take the sting out of the Imam's words uttered all those years ago. By "hell", she says, he was referring to the dilemma that can face children when their parents have two different religions. Her husband also defends the Imam: "His warning is justified. Some couples compete with each other for recognition of what they see is the correct religion. Or they do away with religion altogether. That doesn't apply to us." He looks over to his wife, who is standing at the stove. In any case, she says, the Imam said something else: "For every wall that the Prophet puts up, there is a door." In other words: There is a solution.

Their apartment in a three-storey house in Gladbeck, near Dortmund, reflects a blend of eastern and western lifestyles. The shoes remain outside in the hall, inside there are felt slippers in all sizes for visitors. The first thing you notice in the living room is a reproduction of The Last Supper by Leonardo de Vinci, hanging above an oval dining table. Other, smaller pictures portray motifs of religious mysticism – on one painting by the Persian painter Rashi al-Din, Jesus and Mohammed ride peacefully alongside one another. 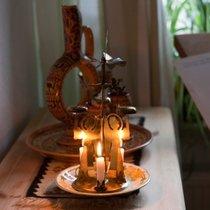 "Some couples compete with each other for recognition of what they see is the correct religion. Or they do away with religion altogether. That doesn't apply to us, " Thomas Dreessen explains

"Don't let the Dolmas get cold," Müzeyyen pushes over a plate of stuffed peppers and yoghurt and tops up the tea. Chatting, cooking, serving guests – she juggles everything simultaneously. The daughter of a Turkish immigrant family assimilated traditional female roles early on in life, learning to cook and serve at table. Together with her mother and two brothers, she followed her father to Duisburg at the age of eight, leaving her village on the Black Sea. She was soon translating for her mother and other Turkish acquaintances at various official authorities and during visits to the doctor.

But even as an adult woman, she rarely left the house without an escort. She and her future husband met while she was working in the Protestant parish with mothers and children from immigrant families.

At the time, marriages between Germans and Turkish immigrants were rare. The Dreessens had no role models, nothing to give them any ideas as to how a Christian-Muslim family might look, and both Church and Mosque were sceptical of such a union, or even rejected the prospect outright. In particular, a marriage between a Muslim woman and a man of a different faith was and still is taboo in traditional Muslim societies, because according to age-old custom, the man determines the family's religious affiliation.

Co-habitation for a trial period in the year 1984? "Not in an Islamic family. That would have been worse for my parents than marrying a German," says Müzeyyen. So although they had only just fallen in love, the theologian and qualified businesswoman decided to wed. When the daughter tried to visit her family after the marriage proposal, the door was shut behind her. The family implored her: "Never go back to that man. You'll end up on the street in six months. German men change their women like their shirts."

She stood by her decision. The couple brought in mediators. At the time, the near city of Duisburg already had a Christian-Muslim network that included respected mediators from both religions. They explained to the parents, who had been shaken to their very foundations, that a marriage between a Christian and a Muslim is not a disgrace. They succeeded in securing parental consent to the marriage.

Stores from the Bible and the Koran

They celebrated with more than 500 guests, a party attended by most of the bride's Turkish relatives. However, these relatives stayed away from the Church ceremony. But the Protestant service was important to the bride, because she "wanted to get married before God" and at the time there was no Muslim blessing for the Christian-Muslim couple. 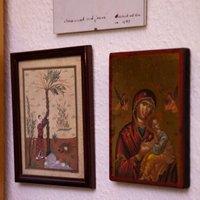 An Arab miniature painting and a Christian icon: The Dreessen's home reflects a blend of eastern and western lifestyles

"We went to church together," says Müzeyyen, recalling the early days of the marriage. Her husband also experienced the mosque as "a wonderful place where I sense humility in the presence of God." He liked the atmosphere of the place and occasionally went there alone, even if it was just to watch proceedings. The birth of the couple's son restored the close relationship between daughter and parents. "The ice melted when my parents realised that I was talking to our son in Turkish," says Müzeyyen. At home, the parents organised an intensive religious family lifestyle. They devised a nightly family ritual, related one story from the Bible or Koran or a fairytale, and said the Lord's Prayer together. "When you weren't there, I said the 'Fatiha' prayer, the first sura of the Koran, and the Lord's Prayer," says Müzeyyen.

Thomas Dreessen had set out to become a Protestant minister, but gave up on the plan following the marriage: "Love comes before career," he says. At the time, a minister could not be married to a woman of a different faith. Thomas Dreessen worked at a drop-in youth advice centre in Duisburg-Nord and as the social affairs secretary of the Westphalian state church, and later became an adviser for Protestant youth work. While the children were growing up, Müzeyyen Dreessen worked on a voluntary basis for the local Muslim community, setting up women's groups and representing the community in German public life. She was a woman who didn't wear a veil, and who was also married to a Christian. Although not all members of the Turkish Ditib community accepted her, she persevered in her role for 10 years.

One particular subject has the married couple firing sentences at each other back and forth: the religions, or more specifically major religious festivals. It sounds as though they could talk to each other forever. "Christmas," says the wife, "I would have had to invent it for myself if I hadn't become acquainted with it here. I love this time, the candles, being together, the fish that my husband prepares on Christmas Eve." Thomas Dreessen immediately starts talking about the Islamic Feast of Sacrifice, which recalls the story of plans to sacrifice Isaac and his preservation, a tale recorded in both the Koran and the Bible. For him, the story has gained a key significance through his wife's religion. It has taught him "that you shouldn't sacrifice your children, not even to your own interests."

The individual paths of the mystics

Before she was recently baptized, the family's elder daughter asked: "Mum, would you be sad if I became a Christian?" "No", the mother replied, "your father has been baptized, and I love him." The other children, the son and youngest daughter, have not yet decided which religion is for them. Yasmin says: "I don't feel quite at home in either faith. I can't be pigeon-holed." Perhaps their child will not adhere to any religion, but the parents are not worried. They agree with the mystics, who place their faith in individual religious paths. It's getting late when Thomas Dreessen remarks: "You haven't asked about burial." The Christian husband and Muslim wife have already given the matter some thought. Until now in Germany, Muslim burial grounds are separated from other parts of the graveyard by a hedge. The Dreessens are not prepared to accept this. They plan to conceive something new, a resting place that they can share. In due course.

END_OF_DOCUMENT_TOKEN_TO_BE_REPLACED
Social media
and networks
Subscribe to our
newsletter