Parvez Sharma spent six years traveling throughout the Muslim world, Europe and North America documenting the lives of gay and lesbian Muslims – many of them devout – who struggle to reconcile their faith with their sexuality. Marianna Evenstein caught up with the Indian filmmaker

​​Parvez Sharma identifies himself as both gay and Muslim. He moved to the United States in 2000, but it was only after the September 11 attacks in 2001 that Sharma felt compelled to "come out" as a Muslim in the US.

"Everything in the world had changed in some ways, and my Islam made me very visible in the West" he says. At the same time, Sharma was frustrated with the negative ways in which Islam was being portrayed in Western media post 9-11. The making of "A Jihad for Love" allowed him to tell the "story of Islam through its most unlikely storytellers – gay and lesbian Muslims."

The subjects of Sharma's film represent the various and diverse worlds of Islam – Sunnis and Shi'ites, traditional and modern, orthodox and more secular. They include an openly gay imam in South Africa, an Egyptian who was imprisoned and tortured for being gay before fleeing to France, a lesbian couple in Turkey, and four young gay men who escaped Iran and now live in Canada.

What all of these individuals share is a continued and intense devotion to their faith. Despite the ordeals they go through, none of them chooses to abandon their beliefs.

Sharma spent a great deal of time developing a relationship of trust with his subjects, which enabled them to open up about the intensely private experiences of faith and sexuality. This in turn had a tremendous impact on Sharma personally.

"I have definitely gone through a long journey of reclaiming my faith and reclaiming my Islam through this film. I feel like I went on a journey through the many worlds of Islam. I have suffered the anguish my subjects suffered, and they taught me every day about faith."

According to traditional interpretations of the Qur'an, homosexuality is considered sinful and is strictly forbidden. As a result, same-sex activities are outlawed in most Islamic countries. Because Sharma knew that he would never be granted permission from Islamic governments to make a film on such a taboo subject, he often shot his material undercover. "I pretended to be a tourist," he explains. "I was able to get remarkable access because I looked like everybody else."

Sharma's own religious identity enabled him to create a film from an insider's perspective and with a tremendous amount of respect for the faith. "In many ways, being a Muslim enabled me to film with a Muslim lens and a great deal of understanding of Islam," says Sharma. "It would have been easy to make a film that was just critical of my religion. But I worked very hard together with my subjects to make sure that the beauty of the faith they hold so dear is documented with absolute honesty and integrity."

Jihad as an internal, spiritual struggle

The film's title, "A Jihad for Love", was a very deliberate choice. In the West, the concept of "jihad" has come to be associated primarily with "holy war". But "jihad" in Islamic tradition is also understood as an internal, spiritual struggle. 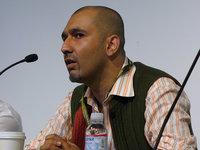 "A Jihad for Love" reveals homophobia and persecution in the Muslim world, but Parvez Sharma has stated that the purpose of the film is not to vilify Islam

​​As Sharma explains: "We are laying claim to one of the most contested and divisive words in our vocabulary today, and saying that what the violent minority within Islam presents as jihad is certainly not what the Prophet Mohammed was talking about. Because he was talking about the greater jihad, the struggle within the self."

It is this kind of struggle that the subjects of Sharma's film are engaged in – a personal, spiritual struggle for acceptance, and ultimately for love. While there is much anguish in each of their stories, there is also a sense of hope. As the film's characters strive to reconcile their beliefs with the innate reality of their being, they succeed in negotiating a new, personal relationship to Islam. And by doing this, they offer both Muslims and non-Muslims everywhere a different kind of perspective – one that focuses on a shared humanity and bridges religious divides.

"A Jihad for Love" has already sparked a tremendous response from audiences at film festivals in Canada, Brazil, Mexico, South Africa and the UK. While most of the reaction has been overwhelmingly positive, Sharma admits that he has received a number of angry and threatening emails. But this has not deterred him from his goal of bringing the film to Muslim audiences in the Muslim world.

"Seeing the audience response and how people are embracing this film, I realize that in the next few years the film will turn into a movement," says Sharma. "We are launching a Muslim dialogue project with this film, which will be transformative and create change. I will take this film into mosques, into communities where it really matters most."

"If I can prevent a young man in Tehran or a young woman in Cairo from feeling completely isolated and alone, from contemplating suicide… (if I can) give them a sense of hope to be able to exercise their sexuality but also stay true to their faith… if one person's life is changed by the film, I think I would have been victorious in some way."

"A Jihad for Love" is directed and produced by Parvez Sharma, co-produced by Sandi DuBowski (Director/Producer of the award-winning "Trembling Before G-d") in association with ZDF-Arte, Channel 4, LOGO, SBS-Australia, The Sundance Documentary Fund and The Katahdin Foundation.

The film will be screened in the Panorama documentary section of the Berlin International Film Festival. For exact screening times, visit the festival's official website. www.berlinale.de

Controversy over Bosnian Film
"Go West" – A Story about Romeo and Romeo
A Bosnian film director has received death threats after making a movie that depicts the love and struggle of two gay men – a Muslims and a Serb – during the ethnic conflict. From Sarajevo, Malcolm Brabant reports

Interview with Eytan Fox
Falling in Love with the Enemy
"The Bubble" is the story of three young Israelis in Tel Aviv, and a tragic love affair between one of them and a Palestinian. This Israeli film won the Panorama Award from the International Confederation of Art House Cinemas. Igal Avidan spoke with director Eytan Fox

END_OF_DOCUMENT_TOKEN_TO_BE_REPLACED
Social media
and networks
Subscribe to our
newsletter