A look at the corruption scandals facing Israel's Netanyahu

Israeli Prime Minister Benjamin Netanyahu is seeking to hold on to power in Tuesday's historic repeat election as the shadow of various corruption charges loom over his future.

Netanyahu's legal woes - and the recommendation to indict him on bribery, fraud and breach of trust charges - were well known before the April vote and didn't appear to influence his popularity.

But Netanyahu appears more vulnerable now. Prior to the April vote, he vowed not to seek formal protection from prosecution. But assuming he had won, Netanyahu's allies then quickly began drafting a contentious bill aimed at granting him immunity and were looking to push legislation limiting the power of Israel's Supreme Court. He's now expected to demand any future coalition partners pledge to back immunity for him, which may limit his options.

The main opposition party, Blue and White, for instance, already is exploiting Netanyahu's obsession with personal survival. It has ruled out a coalition with him, though it says it would be willing to form a partnership with his Likud party under different leadership. Opinion polls indicate the two parties may have to form a unity government.

Without immunity, Netanyahu would likely be forced to stand trial, which would put heavy pressure on him to step aside.

Here's a look at the background and current cases facing the long-time Israeli leader:

The scandals have engulfed Netanyahu's family and his inner circle, with at least three former close confidants turning state's witnesses and testifying against him.

Attorney General Avichai Mandelblit says he has enough evidence to press charges against Netanyahu in three separate cases, pending the pre-indictment hearing where Netanyahu will be given the opportunity to defend himself.

Annexing the Old City of Jerusalem

The Mamilla district on the outskirts of the Old City of Jerusalem offers an excellent example of how the Zionist dream of a united Jerusalem is being attained through urban planning decisions, which aim to achieve the European ideal of a ″beautiful city″. By Felix Koltermann 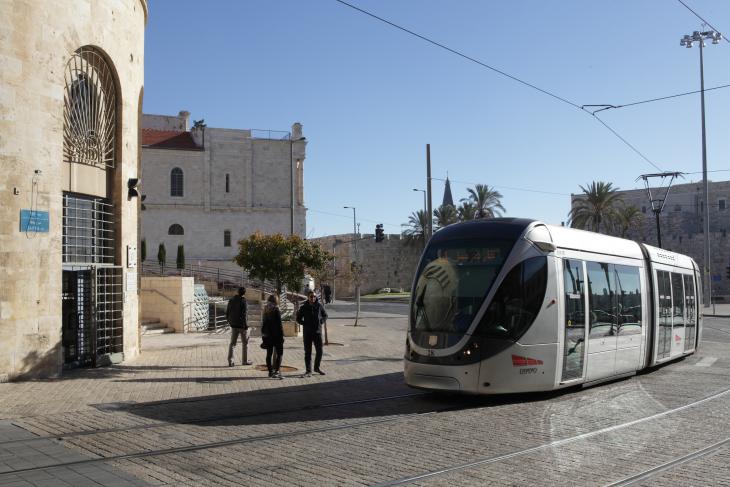 Tsahal Square is where Jaffa Street, previously West Jerusalem′s main thoroughfare and today a traffic-calmed shopping promenade, meets the walls of the Old City and East Jerusalem. This is also the route of the controversial tram, inaugurated in 2001, which provides attractive urban flair 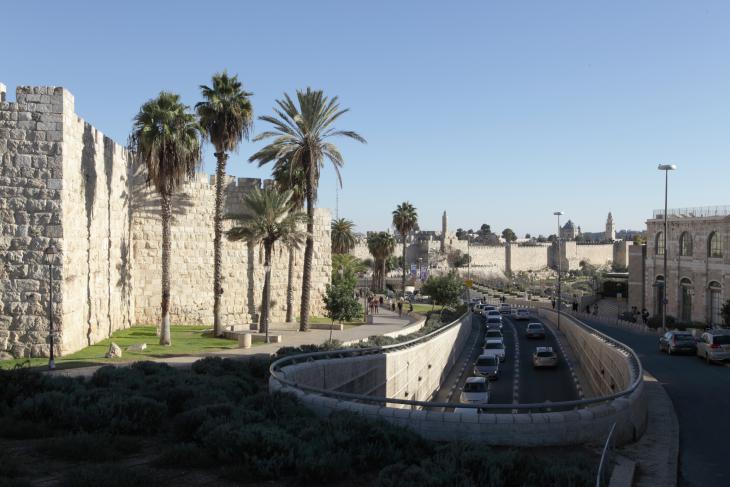 The main north-south traffic axis runs through a tunnel under Tsahal Square, thereby allowing pedestrians to conveniently walk to the Old City from West Jerusalem. From here, it's but a short stroll along the wall to the Jaffa Gate 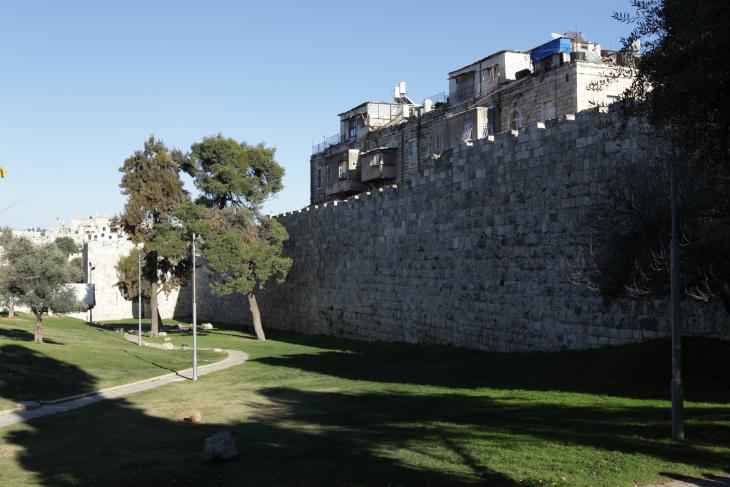 The walls of the Old City of Jerusalem are bordered by a green park area belonging to a national park, a great deal of which is located in no man's land 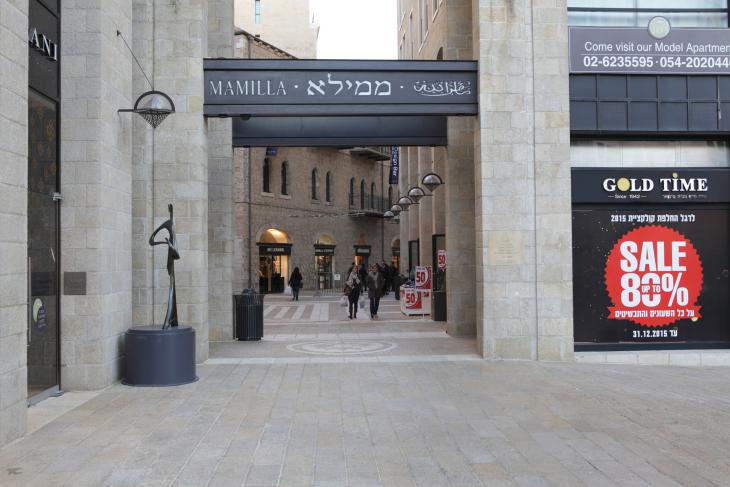 Another way to reach the Old City from West Jerusalem is via the Alrov Mamilla shopping mall, which opened in 2007 and straddles the no man's land between East and West Jerusalem 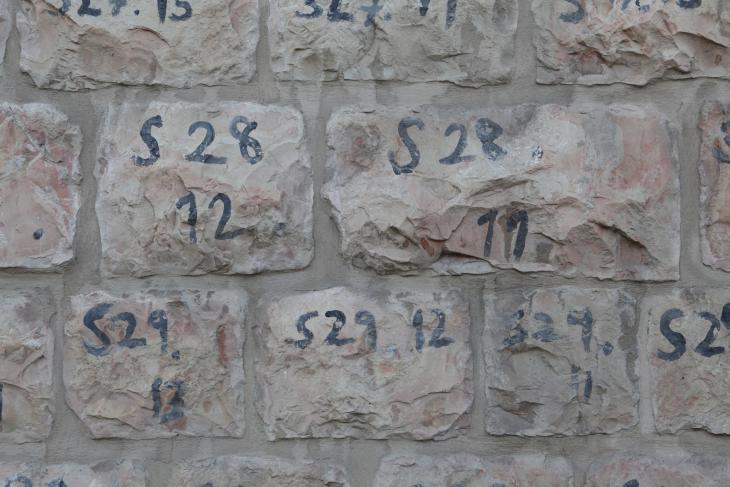 Until 1948, the site of today's shopping mall was a bustling business district. Some old buildings were torn down during the construction of the mall, but were rebuilt stone for stone, as the numbered building materials bear witness 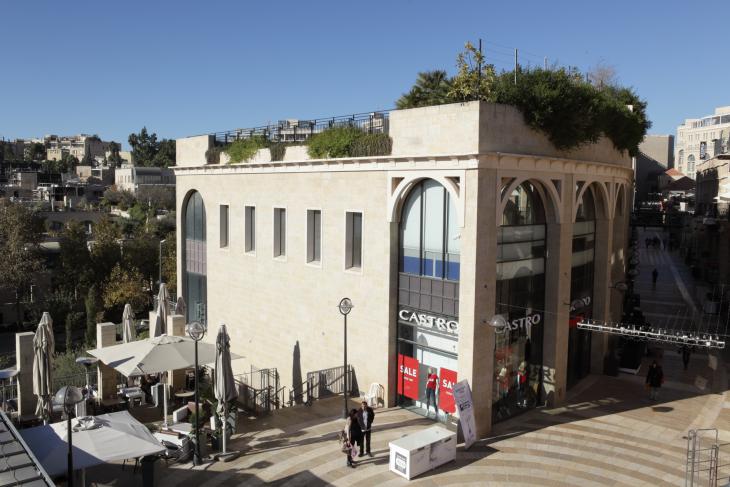 The shopping mall is a kind of open-air promenade and hosts both national and international fashion chains. The shopping street acts as a bridge to the Old City 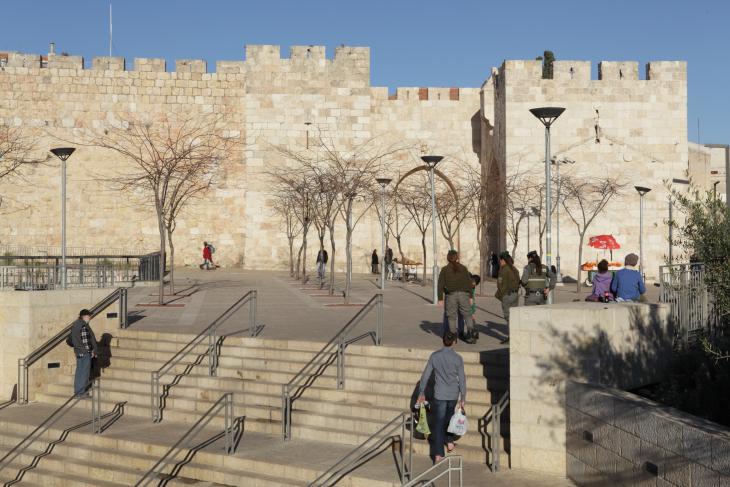 Exiting the Mamilla Mall, these stairs lead directly to the Jaffa Gate, which can be seen in the background and thereby to the Old City of Jerusalem. Israel police are often positioned here to conduct checks on Palestinians 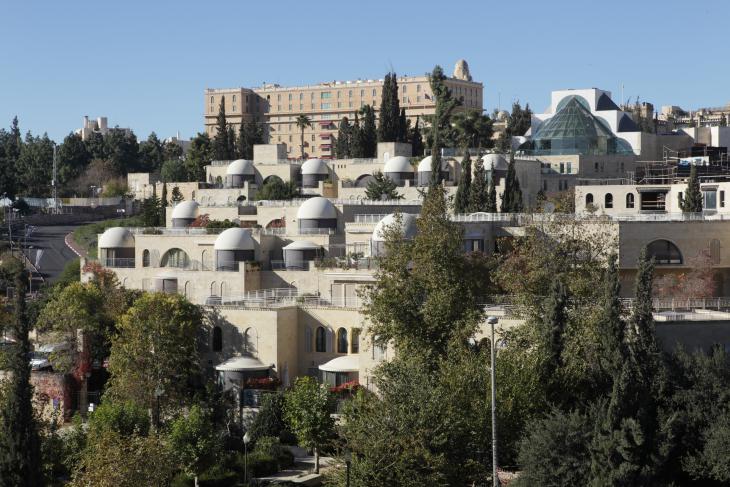 Looking out over the walls of the Old City towards the West, one sees the historic King David Hotel on the other side of the Hinnom Valley. The domes in the foreground belong to the David's Village apartment complex 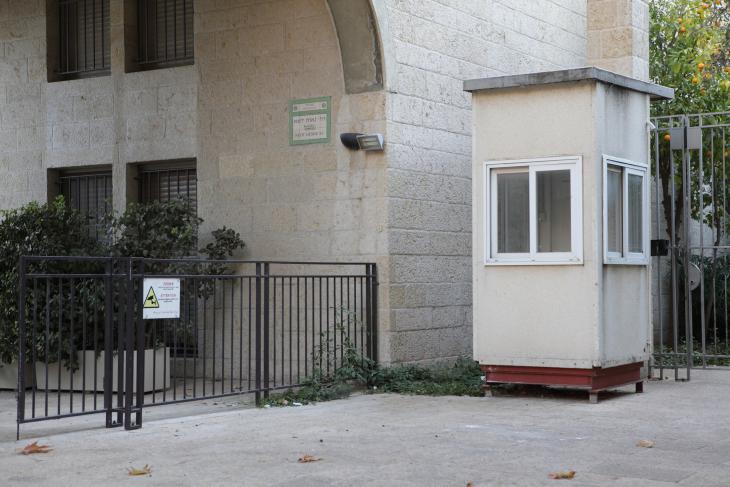 The David's Village apartment complex is a so-called gated community. The whole area is under video surveillance and there are guardhouses at the entrances. These features are meant to attract a wealthy clientele 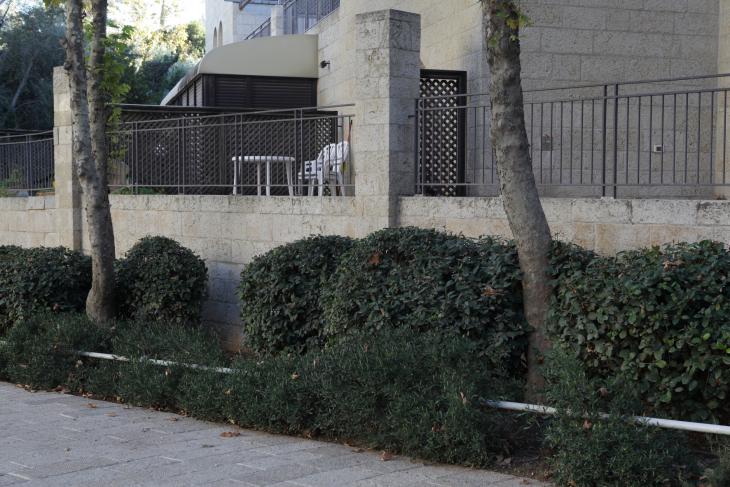 Many apartments in David's Village stand empty the whole year long, because most of the wealthy apartment owners come from the USA and Europe and only vacation in Jerusalem 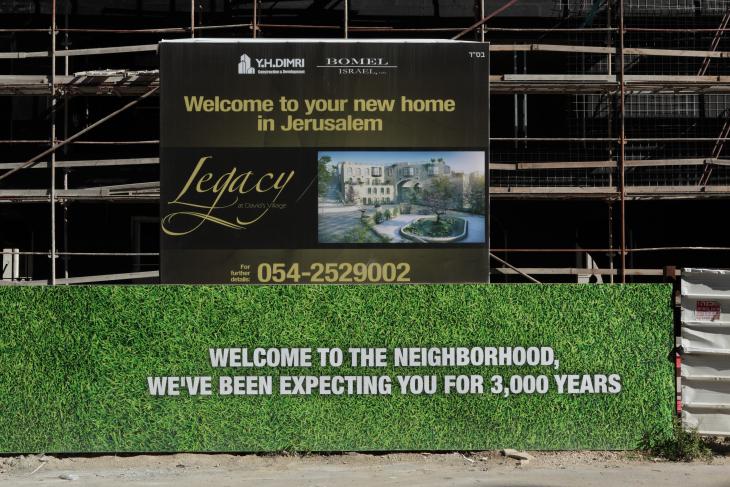 A billboard advertises the new Legacy apartment complex built next to David's Village by stressing references to history. In the process the developers hope to meet the expectations of affluent property investors from abroad 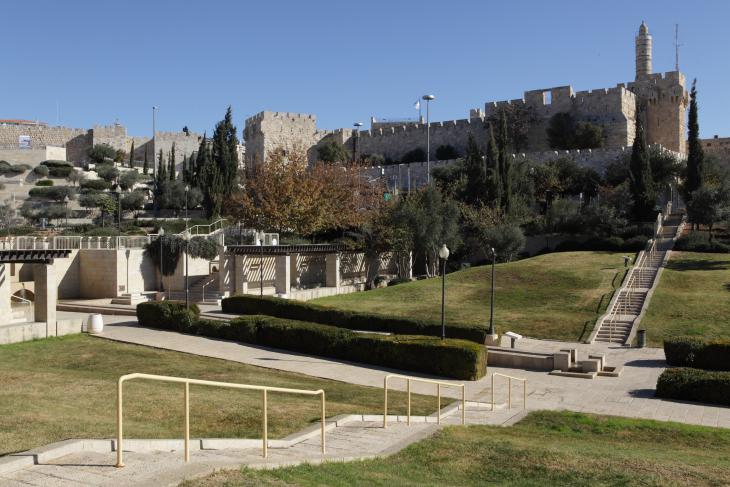 The Teddy Kollek Park, named in honour of a former Jerusalem mayor, is located in the Hinnom Valley. In the background, one can see the walls of the Old City with the Tower of David, which plays a key role in promoting the mythology of Jerusalem 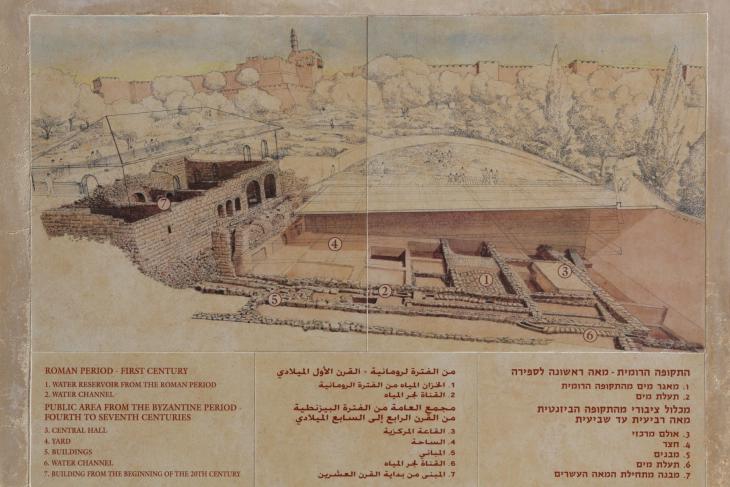 Excavations in the lower part of the Hinnom Valley have brought to light the remains of Roman buildings. The information panel shows how archaeology and current political interests have become intertwined

His political opponents say that even if he's legally permitted to stay in office, he will have lost the moral mandate to lead. They say remaining in office while on trial would be embarrassing and divert his attention from important state issues.

Netanyahu and his wife, Sara, have long been known for their penchant for an expensive lifestyle and questionable use of public funds. Mrs. Netanyahu has been convicted of misusing state funds, after she reached a plea bargain settling allegations that she overspent some $100,000 of state money on lavish meals. She'd previously been indicted for graft, fraud and breach of trust.

The most damaging case against Netanyahu involves an influence-peddling scandal in which two of his formerly closest aides are testifying against him on suspicion of promoting regulation worth hundreds of millions of dollars to Israel's Bezeq telecom company. In return, Bezeq's popular news site, Walla, allegedly provided favourable coverage of Netanyahu and his family.

Nir Hefetz, a former Netanyahu family spokesman and Shlomo Filber, the former director of the Communications Ministry under Netanyahu, cut deals with prosecutors after they were arrested along with Bezeq's controlling shareholder Shaul Elovitch, his wife, son and other top Bezeq executives. Former journalists at the Walla news site have attested to being pressured to refrain from negative reporting of Netanyahu.

Police say that in return for jewellery, expensive cigars and champagne, Netanyahu operated on Milchan's behalf on U.S. visa matters, tried to legislate a generous tax break for him and sought to promote his interests in the Israeli media market.

Police have not commented on what Packer, who reportedly sought Israeli residency status for tax purposes, may have received and Netanyahu has said all he received were gifts from friends. Long-time aide Ari Harow is a state witness in this case.

Police have also recommended indicting Netanyahu for supposedly offering a newspaper publisher legislation that would weaken his paper's main rival in return for more favourable coverage.

Netanyahu reportedly was recorded asking Arnon Mozes, the publisher of the Yediot Ahronot daily, for positive coverage in exchange for helping to weaken Israel Hayom, a free pro-Netanyahu newspaper that had cut into Yediot's business.

Israel Hayom is financed by Netanyahu's American billionaire friend Sheldon Adelson and largely serves as the prime minister's mouthpiece. Netanyahu has noted that a proposed law to weaken Israel Hayom never passed and that he had even dissolved his coalition and called a new election in 2015 because of his opposition to the proposal. Harow is a state witness in this case, too.

According to TV reports based on recently leaked police investigations, Adelson's wife also testified that Sara Netanyahu exerted pressure on her to provide gifts and favourable media coverage.

Netanyahu was questioned, but not named as a suspect, in a probe related to a possible conflict of interest involving a $2 billion purchase of German submarines that implicated some of his closest associates.

Netanyahu's personal attorney David Shimron, who is also his cousin, represented the German firm involved and is suspected of using his influence over the prime minister in return for a hefty cut of the deal.

But after seeming to escape this scandal, it was revealed that Netanyahu reportedly earned $4 million on a related German submarine sale to Egypt by owning shares in one of the German manufacturer's suppliers.

Netanyahu denies any financial wrongdoing regarding his investments in the Texas-based company Seadrift Coke steel factory, managed by another one of his cousins, Nathan Milikowsky.

Seadrift was acquired by Ohio-based GrafTech International which was a supplier to German industrial group ThyssenKrupp. The German company later sold submarines to Israel and Egypt.

Though Netanyahu is unlikely to be implicated in the case, some of his political opponents - such as former Prime Minister Ehud Barak - say it marks his most severe offense since his corruption allegedly touched on matters of national security.    (AP)

More on this topic
Israel police seeking Netanyahu's indictment in a further corruption caseAnother round of Knesset elections: Deciding Netanyahu's fateIsrael′s parliamentary elections: To be or not to be – the Netanyahu question
Home
Print
Newsletter
MoreAll Topics

END_OF_DOCUMENT_TOKEN_TO_BE_REPLACED
Social media
and networks
Subscribe to our
newsletter