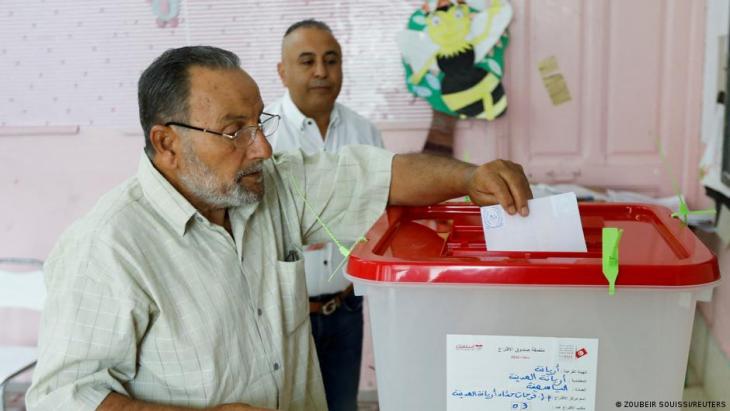 A new constitution for Tunisia
From president's power grab to referendum

Based on exit polls and preliminary results for Tunisia's constitutional referendum, it looks as if the new constitution proposed by President Kais Saied will be passed. Nearly three years into his presidency, Saied has steadily tightened his grip on power. The timeline below outlines the key events of the past two years that led to Monday's referendum

2020/first half of 2021: A protracted deadlock grips Tunisia. Saied, elected in 2019, is at loggerheads with prime minister Hichem Mechichi and parliament speaker Rached Ghannouchi, leader of the Islamist-inspired Ennahdha party. The stalemate cripples management of the Covid pandemic.

25 July: Thousands of Tunisians join protest marches against the Ennahdha-backed government as recorded Covid deaths surge to one of the highest rates per capita in the world. That night, Saied suspends parliament for 30 days, surrounding it with tanks, and dismisses Mechichi, citing an article in the 2014 constitution he says allows him to take "exceptional measures" to protect the state. Saied says he will pick a new premier and remove immunity from lawmakers, whom he accuses of corruption. He warns that armed opposition will face a "rain of bullets". Ennahdha slams Saied's actions as a "coup d'etat".

22 September: Saied assumes powers that effectively allow him to rule by decree. Three days later, around 20 human rights groups condemn his actions and warn of a slide back towards authoritarianism.

10 October: At least 6,000 people demonstrate in Tunis against the president, a week after some 10,000 Saied supporters turned out in force across the country. The following day, Bouden forms a government, but Saied himself heads the cabinet.

13 December: Saied presents a roadmap, calling for a referendum in July 2022 on constitutional reforms, and says parliament will remain suspended until new elections he sets for December 2022. 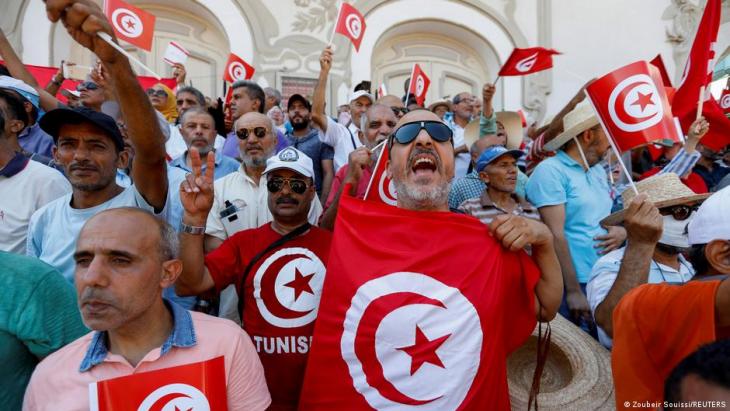 Protesters demonstrate against the draft constitution proposed by President Kais Saied. Turnout in the referendum was very low after opposition groups called for a boycott of the vote

5 February: Saied dissolves top independent judicial watchdog the Supreme Judicial Council (CSM), accusing it of bias and replacing it with a body under his own control. Saied announces he is dissolving parliament on 30 March, hours after lawmakers held a plenary session online and passed a bill against his "exceptional measures".

22 April: Saied assigns himself the power to appoint the head of the electoral commission.

2 June: Saied sacks 57 judges accused of corruption and other crimes, a day after passing a new law strengthening his grip on the courts.

30 June: The text of a new constitution giving vastly more powers to the president is officially published. Sadeq Belaid, the legal expert who oversaw the drafting of the new constitution submitted to Saied, says the version Saied published has been changed in a way that could lead to a dictatorship.

Early July: Ennahdha urges its supporters to boycott a referendum on the draft, saying it would "lead to a repressive, authoritarian regime". Saied publishes a slightly amended draft but does little to address such concerns.

26 July: Saied's rivals accuse the electoral board of "fraud" and say Saied's referendum has failed. That evening, the electoral commission says that the "yes" vote makes up 96.4 percent of valid ballots, adding that the results are not yet final.   (AFP)

Tourists have been returning to Tunisia, Egypt and Morocco. But, given the global uncertainty caused by the Ukraine war, will the comeback be enough to save a struggling sector, ... END_OF_DOCUMENT_TOKEN_TO_BE_REPLACED

According to Tunisia's electoral board, 94.6 percent of valid votes cast in Monday's constitutional referendum were in favour of President Kais Saied's constitution. Turnout was, ... END_OF_DOCUMENT_TOKEN_TO_BE_REPLACED

Tunisians are set to vote on a new constitution on 25 July. The prominent lawyer and women's rights activist Yosra Frawes fears the referendum could facilitate a return to ... END_OF_DOCUMENT_TOKEN_TO_BE_REPLACED

For the first time since 1989, Algeria‘s authoritarian regime has sent a military parade marching through Algiers. A formidable show of strength designed to impress rival regional ... END_OF_DOCUMENT_TOKEN_TO_BE_REPLACED
Date:
Mail:
Send via mail

END_OF_DOCUMENT_TOKEN_TO_BE_REPLACED
Social media
and networks
Subscribe to our
newsletter