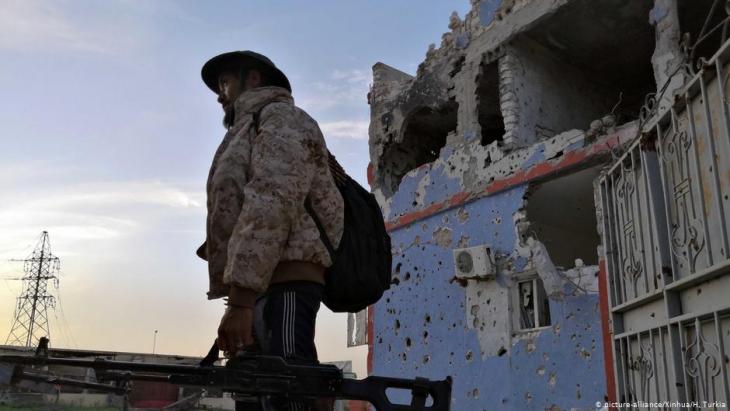 A truly international conflict
How can Europe help prevent the carving-up of Libya?

Having forfeited any real influence in Libya, Europe needs to look to the judicial use of sanctions. Curbing Russian influence and drawing support away from Haftar is essential if the unity of the country is to be preserved, writes Wolfram Lacher

With major support from Turkey, forces aligned with the Tripoli-based Government of National Accord (GNA) in April and May 2020 inflicted a string of setbacks on Khalifa Haftar that eventually led to the defeat of his forces in western Libya in early June. A key moment came on 23 May with the withdrawal of mercenaries by the Russian private military company Wagner Group.

Airstrikes from Turkish-operated drones were suspended as the mercenaries left, suggesting that Haftar’s Tripoli offensive ultimately fell victim to a Turkish-Russian understanding. Russia retains mercenaries in central Libya, where it has also recently stationed fighter jets in Haftar’s support. Military support from Russia and the United Arab Emirates (UAE) remains essential to Haftar’s survival by de­terring GNA advances beyond Tripolitania.

Haftar’s defeat in western Libya shows how decisive foreign support has become for both sides since Haftar launched his offensive in April 2019. Military assistance from the UAE, Egypt and Russia, as well as political backing from the U.S. and France, accorded Haftar a major advantage. Turkey, the GNA’s only notable foreign supporter, provided limited assis­tance in the war’s early months and sus­pended it during autumn 2019, allowing Haftar’s forces to make progress in Tripoli.

You may also like: European-Libyan relations – Whom to trust when it comes to Tripoli?

Turkey only resumed its support after forcing the GNA into an agreement over maritime rights in November 2019. Con­trary to the covert foreign support for Haftar, Turkish intervention was overt and it rapidly altered the balance of power after the fighting escalated in late March 2020. Covert UAE support in the form of drones and air defence systems proved ineffective in the face of Turkish military action. 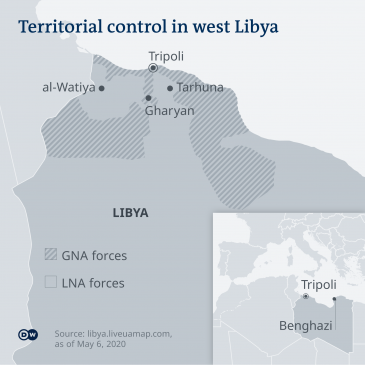 Deep societal rifts and foreign intervention: Libya’s conflicts are rapidly changing shape. With the defeat of Khalifa Haftar’s year-long offensive on Tripoli, Russia and Turkey are attempting to carve out spheres of influence that are bound to collide with the interests of other foreign powers – and with the fluidity of Libya’s political landscape

Haftar’s defeat in Tripoli has major impli­cations for Libya’s conflict landscape. The two warring camps are alliances of con­venience and the end of Haftar’s power bid will re-shape them. Armed groups from western Libya that go back to the 2011 war against Gaddafi form the bulk of the forces fighting Haftar. Many had been in rivalry with each other before uniting against Haftar and, although nominally loyal to the GNA, they are often deeply resentful of it.

Haftar, in turn, mobilised a heterogeneous coalition of forces that hoped to sweep to power with him. They include units he built up in recent years in eastern Libya, but also armed groups from western and south­ern Libya whose loyalty to him is often doubtful. Among them, hardline Salafists and former supporters of the Gaddafi regime form prominent subgroups.

Much will depend on whether Haftar’s Libyan Arab Armed Forces (LAAF) will also end up losing Sirte and the al-Jufra region in central Libya. After a chaotic retreat from western Libya, the LAAF are scrambling to stop GNA further advances.

Emirati and Russian aircraft as well as Russian mercenaries have intervened to counter the GNA offensive on Sirte. Turkey is deploying warships, drones and other assets to support the GNA in Sirte.

Turkey and Russia will seek to avoid a direct confrontation, but they appear willing to let their Libyan proxies fight themselves as part of their negotiations over where the limits of their respective spheres of influence should lie.

A GNA takeover of Sirte and Jufra would cause Haftar’s remaining sway over southern Libya to vanish rapidly, and could embolden GNA-aligned forces to push eastwards into the "oil crescent", with its oil export terminals. It would also accelerate the erosion of Haftar’s authority in the east.

Should Haftar retain control of Jufra or even of both areas, he stands a somewhat better prospect of weathering challenges in the east, and keeping some footholds in the south.

The devaluation of the Egyptian pound combined with rising food prices is taking its toll on Egypt. More and more people are slipping into poverty. Karim El-Gawhary reports from ... END_OF_DOCUMENT_TOKEN_TO_BE_REPLACED

Egyptian Sufis have been on the defensive against the country's Islamists for decades. Meanwhile, interest in mysticism is growing among the young members of Cairo’s middle and ... END_OF_DOCUMENT_TOKEN_TO_BE_REPLACED

Abortions are illegal in Egypt unless they are necessary to save a married woman's life. But that doesn't stop local women from having one. Egyptian society needs to acknowledge ... END_OF_DOCUMENT_TOKEN_TO_BE_REPLACED

Food prices doubled, salaries halved, banks restricting withdrawals: Egyptians now have the same problems as the Lebanese. But if things get worse here, the fallout will be far ... END_OF_DOCUMENT_TOKEN_TO_BE_REPLACED

Giessen, Eichsfeld, Kusel, Berlin – cars bearing old German number plates are the latest trend on the streets of Cairo. Many Egyptians regard the discarded plates as chic. What ... END_OF_DOCUMENT_TOKEN_TO_BE_REPLACED

END_OF_DOCUMENT_TOKEN_TO_BE_REPLACED
Social media
and networks
Subscribe to our
newsletter