Skip to main content
A Visit to Mansoura ez-Eldin

In Search of a Literature of Intimacy

Manoura ez-Eldin, born in 1976, is one of the most promising of Egypt's young generation of writers. In her work, she paints an affectionate portrait of modern life in Egypt. Axel von Ernst visited her at work in Cairo 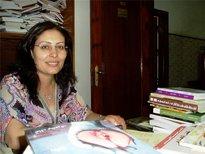 At the forefront of new literature from Egypt: Mansoura ez-Eldin. Her second novel, Beyond Paradise, has been long-listed for the 2010 International Prize for Arabic Fiction known as the Arab Booker

​​ Although the surroundings are looking less and less as if we were on our way to one of Egypt's largest newspapers, the taxi driver carries on unconcerned. With every mile, the people by the side of the road look poorer, the houses smaller and more run-down. Then, as if from nowhere, a modern colossus of marble and glass raises its head before us: the building of the weekly Akhbar el Yom.

In the pleasantly cool stone foyer, a whole four porters behind a counter check passports (a procedure complicated by the fact that I don't have my passport with me) and try to sign me in. Suited men rush past, presumably important journalists on the way to important appointments.

It's not the newspaper itself that interests me. I'm here to meet an Egyptian writer who works here as an editor. Her name: Mansoura ez-Eldin. And of course I've done my homework. I know she was born in 1976 in a village in the Nile Delta, that she graduated from a journalism degree in Cairo in 1998 and started out in television, and I've seen what of her work is available in English.

A small corner for great literature 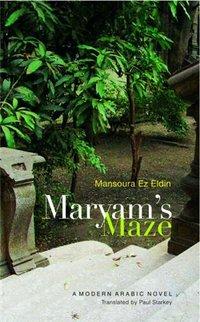 An eerie tale of a woman cut loose from her world and struggling to reconnect the tenuous links to her former life: Mansoura ez-Eldin's Maryam's Maze

​​ Instant evidence that literature is not valued more highly here than anywhere else in the world – this is Mansoura ez-Eldin's workplace for the literary magazine Akhbar al Adab, Egypt's most influential literary publication.

Mansoura herself seems rather embarrassed that she can't offer me anything more impressive. She places me on a stool, clears a space on her desk for my cup of tea and then sits down, disappearing almost entirely behind the piles of review copies.

Books and manuscripts are piled up on the shelves behind her too. Mansoura makes an immediate positive impression, appearing warm, intelligent and reserved. We start out talking about her work here, about Akhbar al Adab and the magazine's feature sections (such as "East and West", "Book garden", etc.).

Renowned international authors are published here in first translations, new Egyptian talents mingle with established names, there are book reviews and a good amount of poetry. The weekly print-run of 20,000 is very respectable.

No state support for literature 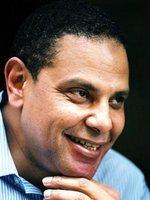 ​​ Then I come to her own writing, beginning with how she got started. There is no state funding for writers in Egypt, so Mansoura worked at her various jobs, writing on the side and meeting up with like-minded people in literary cafés.

A particularly important factor for the entire young writers' scene was the Tuesday meetings with Alaa al Aswani, now a gradual successor to Naguib Mahfouz when it comes to admiration and influence. Then Mansoura published her first pieces in newspapers and magazines – until the renowned publishing house Merit brought out her first book, followed three years later by her much-admired debut novel Maryam's Maze.

Psychological profile of an Egyptian intellectual

"They say," Maryam's story begins in the novel, "that if someone dies in a dream after a fatal blow, he will be killed at the same moment in the real world. In the same way, if someone falls from a great height and hits the ground in a dream, his heart will stop immediately. How is it that Maryam was still living, then?"

From here, the story of the young heroine spreads its wings, once she awakens from a violent dream in an unfamiliar place and tries to return to her old existence and the people within it. Despite the warped nightmarish atmosphere, the novel grows into a warmly and reflexively painted portrait of modern life in Egypt, and above all a psychological profile of a young intellectual Egyptian woman.

The intimate as a literary topos

In her writing, Mansoura explains, she wants to investigate the inner lives of her characters, she wants to understand psychological processes and make them clear to her readers, she wants to communicate individual experiences through her descriptions. Aside from the internationally relevant quality of her writing, this makes her work particularly modern – especially in a culture where the intimate is by no means worn on people's sleeves.

As I take my leave from her in the Cairo newspaper building (after she has accompanied me back down to the foyer), this meeting in person has certainly reinforced my impression: Mansoura ez-Eldin is a writer from whom we can expect a great deal.

Axel von Ernst, born in 1971, is a writer and co-publisher at Lilienfeld Verlag. He lives and works in Düsseldorf.

Cairo's Literature Scene
Between New Dynamics and Political Repression
Arabic literary publishers usually only conduct small print-runs, and readers usually belong to a restricted clique of intellectuals. But recent times have seen a shift in the literary scene on the Nile. Susanne Schanda went to see for herself

Literary Publishers in Cairo
A Special Form of Modern Publishing
The German literary publisher Axel von Ernst was invited to Cairo to talk with Egyptian colleagues about the local literary world, as part of a German-Egyptian cultural programme. He describes his impressions in this report

END_OF_DOCUMENT_TOKEN_TO_BE_REPLACED
Social media
and networks
Subscribe to our
newsletter