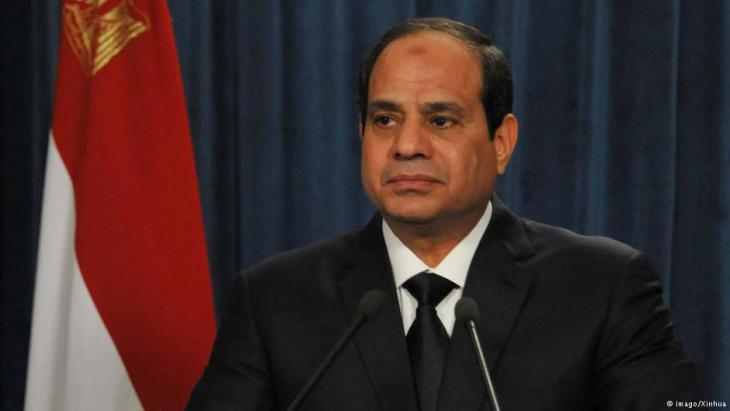 The German government is receiving Egypt's President Sisi on a state visit this week. While the controversial visit is an honour for him, it might damage both counties. After all, while Sisi continues to stir up anti-Western sentiment at home, he is still reliant on the support of the US and the EU. By Annette Ranko

German Chancellor Angela Merkel is this week rolling out the red carpet for a foreign head of state who has long been yearning for such a visit. Egyptian President Abdul Fattah al-Sisi has been in power for one year. Despite the fact that he had himself elected with 97 per cent of the vote, he and his regime have lacked international recognition from the outset. Consequently, a visit to the German capital, where he will be received by the world's most powerful woman, is much more than just a photo opportunity and a chance to shake hands.

It is a milestone, a significant step on Sisi's path to longed-for international acceptance. Sisi's Berlin visit will strengthen his political hand. While the German government does not dispute this, it justifies its actions, describing them as a calculated diplomatic approach, something that is difficult for observers to fully disregard. The German government must of course maintain relations with strategically important Middle Eastern nations – even with authoritarian ones. But shaking hands with Sisi is controversial not just from a human rights perspective. It will not result in a gain in political power; but it is likely to undermine future German influence in this key region.

In Egypt, a discourse driven by the Sisi regime is becoming increasingly dominant. According to this discourse, the toppling of Hosni Mubarak in 2011 was a conspiracy between the West and supposed Egyptian traitors (the secular youth groups who initiated the mass protests of 2011 or the Muslim Brotherhood, which briefly took power after the ousting of Mubarak). This narrative also holds that the conspirators' aim was to destroy Egypt both politically and economically, to deny the nation its historical leading role in the region, thereby making it compliant with Western interests.

Popular support for Sisi is rooted in his claim that he is saving Egypt from this scenario of doom by declaring a "war on terror" on what he claims are the enemies at home and by overcoming economic need and poverty with major national infrastructure projects aimed at restoring Egypt to its rightful position as leading regional power. 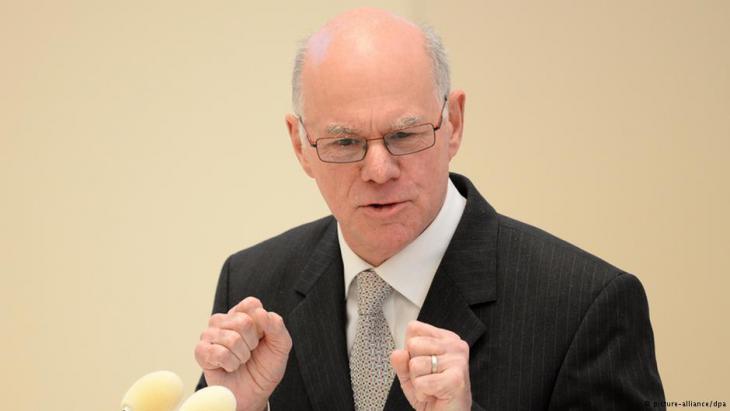 A clear "No" to President Sisi: Norbert Lammert, president of the German Bundestag and member of the ruling Christian Democratic Union, cancelled a planned meeting with Sisi in Berlin, a move that ruffled feathers in Cairo. Lammert said he was acting in protest at persecution of members of the opposition and the high number of death sentences in Egypt, among other things

But Sisi is facing a dilemma. While on the one hand this propaganda is explicitly anti-Western in character at domestic level, he is nevertheless reliant on aid, investments and arms shipments from the West. Even though the Arab Gulf states have massively increased their financial support for Egypt since the toppling of Islamist President Morsi, Sisi cannot do without the West.

In this way, when it comes to the outside world, the regime is trying to portray its policies as something quite different to what they actually are: Sisi is presenting the repressive style of his regime as support for the West's fight against Islamist terror. He is insinuating that there is a broad – if not total – convergence between his security interests and those of Western governments. In this respect, the rise of IS and other violent groups – above all in Syria, Iraq and Libya – is playing into his hands.

But if the German government were to accept this line of argument from the Sisi regime and in so doing help Sisi to present himself as the guarantor of stability and security, it would be making a mistake. After all, the Egyptian regime's wave of domestic repression is also aimed at precisely those pro-democratic groups that Germany sought to support in the wake of the Arab Spring. The German and the Egyptian government's definition of terrorism and security diverge at the very latest at the point where the West is portrayed as allegedly having collaborated with the Muslim Brotherhood and youth groups of the anti-Mubarak revolution in a joint conspiracy aimed at destroying Egypt. This makes the West part of the very threat scenario against which action needs to be taken.

Conspiracy theories against the West 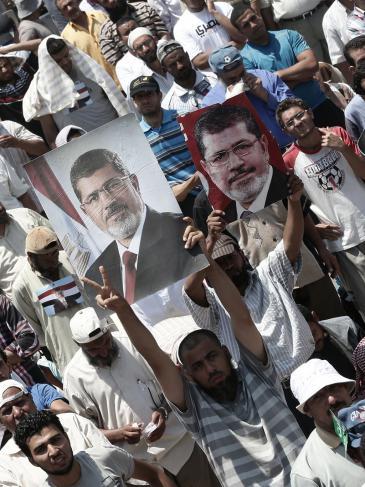 Scapegoats: the first president of Egypt to be elected in free, democratic elections, Mohammed Morsi, was sentenced to death by the Egyptian judiciary in May 2015. This is just one of the many death sentences handed down in recent months in questionable mass trials against hundreds of members of the Muslim Brotherhood

The chances of the Egyptian regime giving up its promotion of anti-Western rhetoric for pragmatic reasons are currently pretty slim: there is strong public demand for foreign-policy independence from the West in Egypt. Even in the decade before the ousting of Mubarak, sporadic popular protests were held not just against Mubarak's authoritarian style but also in frustration at how easily he could be "bought" by the West and the way he subordinated Egyptian interests in the Middle East to Western interests. During the mass protests of 2011, one of the reasons activists called for the ousting of Mubarak was because they claimed he was a puppet of the US. In addition, Sisi's rhetoric is in line with the current trend within the ruling dynasties of the Gulf States that are allied with the Egyptian military, all of which are seeking to scale down their dependence on the West.

The political system in Egypt is no longer just authoritarian, it is beginning to show totalitarian traits: the Sisi regime is mobilising individuals to act as the arm of the state within society. In order to make a contribution to Sisi's war against terror, citizens are being called upon to sniff out "enemy elements" on every corner and denounce them.

While this regime still enjoys broad support across large sections of the Egyptian population, it is questionable how long this will remain the case. Indiscriminate police violence – which was one of the main triggers for the mass protests against Mubarak in 2011 – is yet again rife and again increasingly affecting members of the population who are not politically active and have no Islamist affiliations.

The oppression of the Muslim Brotherhood and other Islamists – unprecedented in Egyptian history – is increasingly radicalising the Islamist community there: since the ousting of Morsi, several hundred of them have been sentenced to death in mass trials, and as for how many of them have been detained, no one can say for sure anymore. The Sisi regime is obviously not in a position to control the violence it itself has unleashed.

The strategy of Western states to back dictators as a way of at least attaining security and stability in the Middle East has already failed once in the past. If the masses take to the streets of Cairo again in protest, will the German government find itself on the wrong side again? And if, up to that point, it also actively supports a regime that is intent on continuing inherent anti-Western polemics, then German policy will become doubly absurd.

Annette Ranko is a researcher at the GIGA Institute of Middle East Studies focusing on Islamism and Islamist movements. Her book, "Die Muslimbruderschaft: Porträt einer mächtigen Verbindung" (The Muslim Brotherhood: Portrait of a Powerful Alliance) was published by the Korber Foundation in June 2014.

In Doha, Arabs from Morocco, Tunisia, Egypt and Algeria are gathering to celebrate the first ever FIFA World Cup to be held on Arab soil. The criticism from Europe? Over the top, ... END_OF_DOCUMENT_TOKEN_TO_BE_REPLACED

November 2022 sees the Arab world firmly in the spotlight with the COP27 in Egypt and the FIFA World Cup in Qatar. Public trust in MENA governments is weak, thanks to their ... END_OF_DOCUMENT_TOKEN_TO_BE_REPLACED

Palme d’Or winner "Boy from Heaven" is a classic crossover film in which cultural elements are mixed together in haphazard and random fashion. Shady Lewis Botros bemoans the ... END_OF_DOCUMENT_TOKEN_TO_BE_REPLACED

COP27 in Sharm el-Sheikh is turning into a PR disaster for Egypt’s military regime. Instead of praise for the host, the news is full of solidarity for imprisoned activist Alaa ... END_OF_DOCUMENT_TOKEN_TO_BE_REPLACED

"Rebel Game: The Power of Football in the Middle East and the Qatar World Cup", an anthology published by Middle East researchers Jan Busse and Rene Wildangel, takes the upcoming ... END_OF_DOCUMENT_TOKEN_TO_BE_REPLACED

Comments for this article: A dictator in Berlin

oppression of the MB

The oppression of the Moslem Brotherhood is NOT unprecedented! Start with Nasser and see what he said and did. Followed by Sadat who also kept them down. What happened when he released them? We all know. Egypt was a peaceful country during Mubareks time. Why? Because he kept a lid on the MB. We saw what happened when the lid was taken off Pandoras box. Now el sisi is trying to keep the lid on. He enjoys broad based popular support. It might not be to the western governments liking, but Egypt has already seen the alternative. Let them find their own course without ill informed sniping from the side lines

END_OF_DOCUMENT_TOKEN_TO_BE_REPLACED
Social media
and networks
Subscribe to our
newsletter