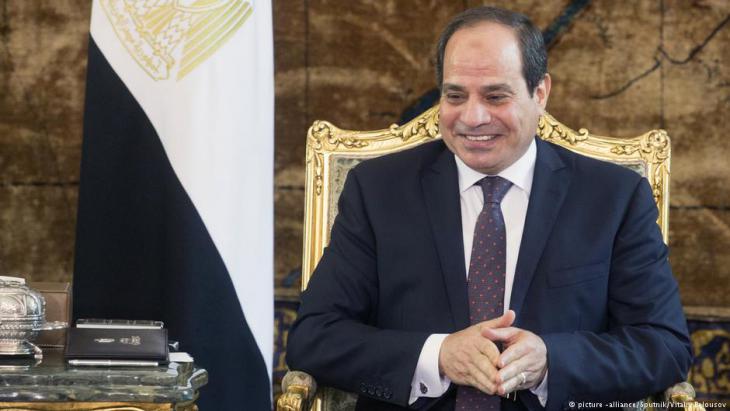 In recent months, the Egyptian regime has moved decisively to close what remains of public space, heralding a new era of repression that is likely to dominate all aspects of political life for decades to come. By Maged Mandour

Over the next few months, the Egyptian regime is going to face a number of domestic challenges it has pre-empted and started to prepare for by initiating repressive legal and political campaigns. The first of these is the transfer of the two islands in the Red Sea from Egypt to Saudi Arabia; a decision that has subjected the regime to considerable internal pressure from the opposition.

The planned transfer of the islands triggered the first mass protests since the coup of 2013. A legal battle, led by the potential presidential candidate Khaled Ali, to halt the transfer concluded with a victory, as the high administrative court deemed the transfer void. This placed the regime in a difficult situation, both domestically and abroad, as it was trapped between the need to maintain its legitimacy and the need to meet its obligations to regional backers. The regime’s response since has revolved around attempts to legally repress opposition in all its forms.

The presumptive presidential candidate Khaled Ali was arrested on the charge of obscenity in a public space. If convicted, he will be disqualified from running in the 2018 presidential elections.

The political repression of secular parties is also part of this pre-emptive strategy. The regime has embarked on a campaign of arrests of activists and members of smaller secular parties with the goal of immobilising them before the presidential elections in 2018. 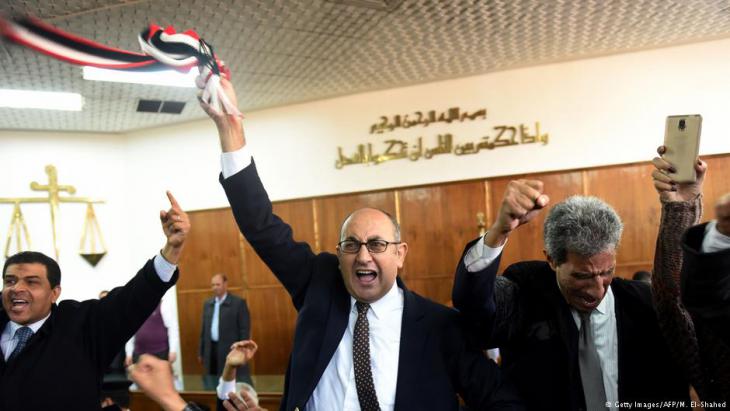 Khaled Ali, founder of the Bread and Freedom Party and presumptive presidential candidate, may have been released, but the repression of other less prominent individuals and groups goes on: on 19 May, the Ministry of Interior issued a statement on its Facebook page stating that they had arrested 40 people in cases of ″Internet crimes″, including using social media to ″incite violence″

By doing so, the regime is not only avoiding public confrontation or backlash – the inevitable reaction were more senior members to be arrested – but they are also hampering the ability of secular parties to conduct effective campaigns on the ground. Even though Khaled Ali, a senior political figure, was briefly arrested, his arrest was a departure from the regime’s strategy thus far. This may be why he was released so quickly, unlike junior members of secular parties who still languish in prison.

More interestingly, a new law has been approved relating to the selection of the four heads of Egypt′s senior judicial bodies. This marks a break with the previous practice, based solely on seniority, where the judicial bodies selected their own heads. It now stipulates that three senior judges are to be nominated, with the president making the final selection.

This has been widely interpreted as an attempt to further erode what was left of judicial independence, while also punishing Judge El Dakrouri, who was responsible for the ruling against the regime in the Red Sea Islands case and was due to take over as head of the State Council.

The response of the State Council has been one of defiance, as they refused to nominate three judges based on this new law and only nominated El Dakrouri. There are indications, however, that the regime will simply ignore the courts and send the treaty to parliament for direct ratification. 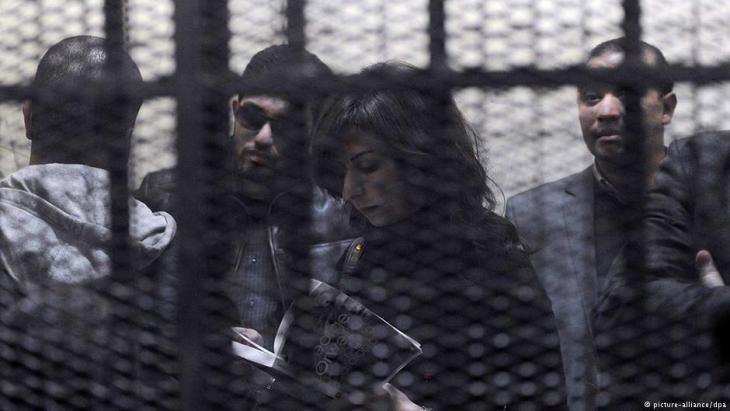 Sisi′s stranglehold on NGOs: according to Egypt′s restrictive new NGO legislation, the authorities have comprehensive powers to monitor the financial affairs of NGOs. Those found in contravention of the new laws could face up to five years in prison and a fine of approximately 55,000 euros. NGOs looking to publish the results of reports or surveys must first request official permission to do so

The regime has attempted to tighten its grip on civil society by issuing a new law that imposes severe restrictions on the operations of NGOs. The most prominent feature of this new law is the creation of a new body, dominated by the security apparatus, which approves and controls the flow of foreign aid to NGOs and restricts their ability to conduct research and opinion polls without approval from the above-mentioned body.

The law imposes heavy financial fines and jail time for simple administrative violations, such as moving the headquarters of an NGO without permission, or working with foreign funders without authorisation. The law also limits the ability to receive cash donations by placing an upper limit of 10,000 Egyptian pounds – anything more than that requires a cheque. In a cash economy, this places considerable bureaucratic hurdles on the process of fund raising.

Thus, the regime’s drive to clamp down on NGOs that offer crucial services the state is unable to provide is a part of its attempt to centralise power, at the same time eliminating any potentially competing authority centres rather than co-opting them into the existing power structure.

It is important to note that Islamists, most notably of Salafist orientation, dominate a large part of local NGOs. The most prominent example of which is Al Gamea al Sharaaya, established in 1912 and one of the largest and oldest NGOs in the country. The new law can be seen as an attempt by the regime to tighten its grip on any Islamists still operating in the public sphere.This clampdown was also followed by a public spat between the regime and Al-Azhar, another power centre that is not under the direct control of the security apparatus. Even though Al-Azhar has generally been supportive of the coup, with a tense relationship with the Muslim Brotherhood during the Morsi presidency, it has also shown a penchant for open disagreement with the regime.

Al-Azhar, for example, was critical of the violent dispersal of the Muslim Brotherhood sit-ins in 2013. It also refused to declare IS apostates, despite public calls to do so. Moreover, it publicly defied the president when a change in the procedures for divorce, from oral to written, was suggested – highlighting the need to separate religion from politics.

The regime’s attempts can be construed as an integral part of its goal to centralise and control all public institutions that have been widely supportive of it, but have shown a degree of independence.

This is coupled with the blocking of a number of prominent independent news websites, most notably Mada Masr, as the regime attempts to control the narrative, especially since transfer of the Red Sea islands would appear to be imminent.

Based on the above, one could argue that the regime is moving to create a totalitarian form of rule, where the security apparatus would come to dominate all aspects of political life. This would include the co-option and repression of parallel power centres, which despite having demonstrated their allegiance have also, on occasion, shown a degree of independence. Since dissent on any scale is not to be tolerated, even smaller groups with no real chance of overturning the regime are likely to face repression.

Maged Mandour graduated from Cambridge with a Masters in International Relations. He is a political analyst and the columnist of “Chronicles of the Arab Revolt” on openDemocracy. He is also a writer for Sada, the online journal for Carnegie Endowment for International Peace

Berlin's annual Human Rights Film Festival closed at the weekend. One entry to the festival was the documentary "Captains of Zaatari". Its Egyptian director Ali El Arabi focuses ... END_OF_DOCUMENT_TOKEN_TO_BE_REPLACED

Two refugees detained in Egypt are facing deportation to Eritrea. The expulsion of the Eritreans, who have been incarcerated in Cairo for more than eight years, has been halted ... END_OF_DOCUMENT_TOKEN_TO_BE_REPLACED

"The people aren’t ready for democracy" has been the constitutional basis for Arab tyranny, its favourite slogan and its sacred narrative for more than a century. Yet, asks Khaled ... END_OF_DOCUMENT_TOKEN_TO_BE_REPLACED

International relations are shifting across the Middle East as regional powers adapt to America's retrenchment and China's growing influence. Although the region could become the ... END_OF_DOCUMENT_TOKEN_TO_BE_REPLACED

Germany's foreign policy is explicitly values-based. But what happens, Ralf Bosen asks, when democracy, the rule of law and human rights collide with the logic of trade and ... END_OF_DOCUMENT_TOKEN_TO_BE_REPLACED

Egyptian author Nadia Wassef talks about opening the first independent bookstore in her home country; and her latest book in which she celebrates books and booksellers. By Manasi ... END_OF_DOCUMENT_TOKEN_TO_BE_REPLACED
Author:
Maged Mandour
Date:
Mail:
Send via mail

END_OF_DOCUMENT_TOKEN_TO_BE_REPLACED
Social media
and networks
Subscribe to our
newsletter