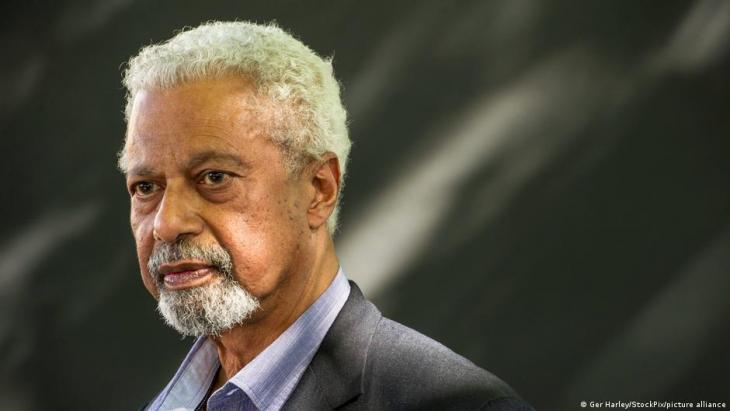 Abdulrazak Gurnah's "Paradise"
"Freedom is not something they can take away"

When Abdulrazak Gurnah was named winner of the Nobel Prize for Literature in 2021, the German translation of his novel "Paradise" was out of print. In early December, it was re-released. "Paradise" upends the prevailing black-and-white view of colonialism in the most striking manner. By Felix Stephan

One of the most persistent contradictions in contemporary literature is to be found in the vast field of American post-colonial narratives. On the one hand, this literature sets out to overcome Eurocentrism once and for all; on the other, no other book is quoted more often in this genre than the Bible. Over and over again in his novels, comics, and films, Ta-Nehisi Coates varies the theme of the Messianic saviour. James Baldwin's novel Go tell it on the mountain is a brilliant variation on the devout gospel songs of the South. Even Amanda Gorman uses Biblical references in her poetry to illustrate the depths to which humankind can fall.

In view of this fact, it is perhaps interesting to note that the novel Paradise, written by Tanzanian-born Abdulrazak Gurnah, who won the 2021 Nobel Prize for Literature, is not rooted in the Bible, but in the Koran. The story of Paradise is set in the second decade of the twentieth century in a region of Africa that is now part of Tanzania, but was then part of the colony of German East Africa. For centuries, the region's dominant cultural exchange consisted of trade with Arabia and India. On the whole, people in this region didn't – and don't – give much thought to Europe. The east coast of Africa in the nineteenth century is a cultural melting pot. Everyone speaks a hotchpotch of Kiswahili and Arabic and the faraway places about which the characters tell wondrous tales are not London and Paris, but Bombay and Gujarat.

It is into this setting – or more specifically into an impoverished family in a remote village in the hinterland – that a little boy, Yusuf, is born. From the word go, his life mirrors that of the Prophet Yusuf in the Koran. Just like Joseph in the Christian Bible, the Yusuf of the Koran is brought to Egypt as a boy, where he was sold to one of the Pharaoh's officers. He is put to work in the storehouse and grows up to be an exceptionally handsome young man who catches the eye of the officer's wife. When she attempts to seduce him, Yusuf rejects her advances. Affronted, she accuses him of trying to seduce her and he ends up in prison.

The story of Yusuf in Gurnah's novel is remarkably similar. When his father can no longer pay his debts, he sells Yusuf to a wealthy merchant whom the boy calls "Uncle Aziz". Yusuf believes that Aziz really is his uncle. From that point on, he works in Uncle Aziz's shop in a small trading town on the coast. A few years later, the merchant's wife becomes completely captivated by his beauty, tries to seduce him, is rejected and publicly accuses him of trying to assault her. 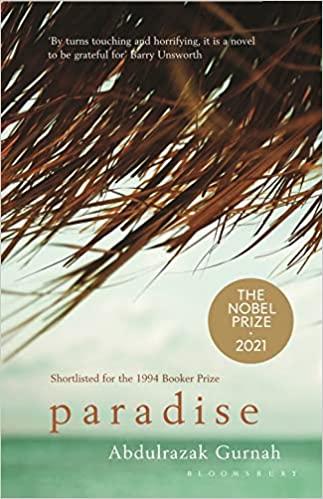 Abdulrazak Gurnah's "Paradise" is a rich tapestry of myth, dreams and Biblical and Koranic tradition, the story of a young boy's coming of age against the backdrop of an Africa increasingly corrupted by colonialism and violence.

Just like the Yusuf of the Koran, Gurnah's Yusuf is plagued by prophetic dreams and ends up managing his new master's storehouse after his family sells him. However, it takes this Yusuf years to understand that he is a slave and will never see his parents again. For centuries – long before the Europeans colonised the region – the slave trade flourished in East Africa. Above all, it was the Arabs who engaged in this trade.

In view of post-colonial sensitivities in Europe and the United States, it is quite a novel and daring undertaking to write about pre-colonial Tanzania in the form of the story about a slave whose biography is borrowed from the Koran, the Holy Scripture of the very people who previously ran the slave trade in the region.

First of all, Gurnah faces up to the problem of writing about a world that was eradicated by the Europeans, while at the same time not idealising that world and thereby infantilising it.

Secondly, he suspends the omnipresent – albeit intellectually largely unproductive – notion that everything in Africa was all peace and harmony before the Europeans laid waste to the continent. Given the brutal despotism and the law of the jungle that prevails there, it is hard to imagine anyone hankering after the Tanzania of Gurnah's book.

In the Tanzania of this novel, parents routinely use their children as security in business, slave-traders kidnap five-year-old girls in broad daylight, actual cases of child abuse are openly discussed while drinking tea on the street as if it were a horse race, the command to publicly torture someone can be issued in the blink of an eye, bystanders cheer the spectacle.

The novel tells of a world that – even without the Europeans – has become degenerate of its own accord, one which will not simply regain its innocence because the horrors of colonisation are about to come crashing down on it.

Gurnah was 16 years of age when Tanzania gained independence in 1964 and the semi-autonomous island of Zanzibar descended into a state of virtual civil war, the like of which had only been seen on the African continent in Rwanda. It was as if open season on ethnic Arabs and Indians had been declared. Suddenly, daily life was so steeped in unprecedented violence that any rhetorical romanticisation of pre-colonial Africa was lost on the young Abdulrazak Gurnah forever. In an interview at his university in Kent, Gurnah once told the story of how at that time, a man brandishing a shotgun ran into a mosque and shot everyone inside, children included. Nothing was ever done about it. "It was as if nothing had happened."

In this respect, the novel is less about apportioning colonial blame between Imperial Europe and the African periphery and more about two different concepts of freedom, namely the Stoic and the Epicurean, as once coined by Carlo Schmid. According to the Stoic theory, only those who can participate in public matters are free. To this end, civil rights are inevitably necessary. The Epicurean theory, on the other hand, also affords generous space to inner freedom, which can even be achieved by a slave, for example, by admiring the beauty of a garden and allowing thoughts to wander.

When Yusuf finally comprehends that he is a slave and that Uncle Aziz is certainly not his uncle but his owner, he turns one by one to the other slaves who are forced to work for the merchant to discuss with them the opportunity to escape. Yusuf is a Stoic in Carlo Schmid's sense of the word; he strives for civil freedom. To this end, he must shake off the bonds of slavery.

He has seen the jungle inland and tells the other slaves that waiting for them there is a "huge, red land" with waterfalls that are more beautiful than anything that they have ever seen before; that everything is complete. "You could hear God breathing. (...) Everywhere throbbed and buzzed and shook with noise." According to Yusuf, the hinterland was like "the gates of Paradise."

But for one reason or another, the other slaves are not interested in freedom. His friend and fellow slave Khalil, for example, replies: "And who lives in this Paradise? Savages and thieves, who rob innocent traders and sell their own brothers for trinkets."

The old gardener Mzee Hamdani, who was once offered his freedom and declined it, replies to Yusuf in true Epicurean style: "When these people say you belong to me, I own you, it is like the passing of the rain or the setting of the sun at the end of the day. The following morning the sun will rise again whether they like it or not. The same with freedom. They can lock you up, put you in chains, abuse all your small longings, but freedom is not something they can take away." Yusuf can't believe his ears: of all the merchant's slaves, he is the only one who wants to flee at all. All the others choose subjugation over freedom.

Until now, the Germans have barely shown any interest in Abdulrazak Gurnah's novels although they feature heavily in them. Tanzania was a German colony until 1918. And so, Wilhelminian officers sweat and pant as they do their drills and march their way through the landscapes of Gurnah's novels. His portrayal of them is almost compassionate: these red-faced, sensitive homosexual readers of Schiller, who themselves barely understand how they came to be in this humid, inhospitable corner of the world, aimlessly torturing the indigenous people, hanging them and forcing them two line up two by two. "The traders spoke of the Europeans with amazement," he writes at one point, "awed by their ferocity and ruthlessness."

For some of the characters, however, the arrival of the Europeans also means a new opportunity: the Arab slave trade becomes more difficult; new business opportunities arise. At one point it is the Germans who save Yusuf's life at the last minute. When it comes to responsibility for crimes that were committed over the course of several centuries in the area that is now Tanzania, Gurnah complicates the debate wherever he can.

"Paradise" ends with the rhythmic pounding of German troops marching in step through a sleepy village, harbingers of an impending catastrophe, the First World War, which will be waged brutally on the boundary lines between the English and the German colonies. This is, incidentally, very similar to the closing image in Magic Mountain by Thomas Mann, a writer who is no less fascinated by the character of Joseph than Abdulrazak Gurnah.

It is possible to write about the Holocaust and the crimes of colonial powers without downplaying anything. In her latest book, Charlotte Wiedemann focuses on the numerous blind ... END_OF_DOCUMENT_TOKEN_TO_BE_REPLACED 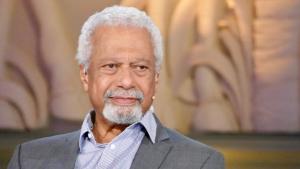 Abdulrazak Gurnah, the British-Tanzanian Nobel-winning writer, has spent a lifetime confronting colonialism and racial politics – and welcomes a new generation keeping these ... END_OF_DOCUMENT_TOKEN_TO_BE_REPLACED

From the Euphrates to the Mekong, dams that ensure one country's water supply risk leaving others parched. But shared water resources can be a source of peace as well as conflict ... END_OF_DOCUMENT_TOKEN_TO_BE_REPLACED

The Tanzanian-born Nobel Prize winner talks to Annabelle Steffes-Halmer about his decision to leave Zanzibar, to write in English – and about the rise of African writers in the ... END_OF_DOCUMENT_TOKEN_TO_BE_REPLACED

Organised by interfaith NGO Religions for Peace, an international conference in Lindau on Lake Constance is dealing with the peace-building role of women inspired by the faith of ... END_OF_DOCUMENT_TOKEN_TO_BE_REPLACED
Author:
Felix Stephan
Date:
Mail:
Send via mail

END_OF_DOCUMENT_TOKEN_TO_BE_REPLACED
Social media
and networks
Subscribe to our
newsletter