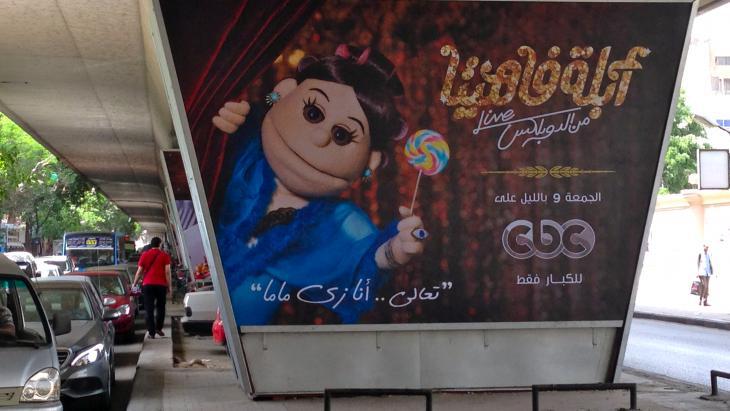 The TV puppet Abla Fahita is causing a furore in Egypt. On her new show, "Live from the Duplex", she frequently and unashamedly addresses taboo topics – a fact that divides opinion in Egyptian society. Elisabeth Lehmann reports from Cairo

"This lecherous puppet is putting children in danger of getting themselves infected with AIDS or syphilis." – "Aids? Syphilis? But I love children!" cries Abla Fahita in a screeching voice. She is wearing gold stars in her ears and a black fur stole draped around her cleavage, having dolled herself up for the first episode of her new series. Her first aim in this episode was to take the wind out of her critics' sails. It was the smartest thing the creators of "Abla Fahita – Live from the Duplex" could have done.

The TV puppet has been whipping up feeling among Egyptian viewers for weeks. Abla Fahita (which translates as "Aunty Fahita"), is a media phenomenon, such as can probably only exist in Egypt. She is widowed, has a daughter and has had several rounds of cosmetic surgery. She certainly doesn't lack self-confidence either: she knows precisely how to make use of her charms. Nevertheless, it never quite seems to work out with men – although sex is an important element in Abla Fahita's life. Vocal pitch, vocabulary, facial expressions, gestures – Abla Fahita is the perfect copy of a typical middle-class Egyptian woman.

For weeks, Egyptians have been confronted with larger-than-life posters showing the scantily-clad puppet with curlers in her hair and a copy of the book "Fifty Shades of Grey". Incidentally, the novel about a woman's sexual fantasies was not even published in Egypt.

When a TV ad for the new show, "Live from the Duplex", was broadcast, the public debate exploded. Abla Fahita is seen lolling lasciviously on a four-poster bed, wearing a negligée. In front of her are two well-built gentlemen, who turn out to be her bodyguards. Abla Fahita has the men take off their shirts to test their suitability for the job. At the end of the ad, they are supposed to take off their shoes with their teeth, followed by the slogan "Only for adults". That was too much for the conservative Egyptian audience. There was an outcry on Facebook and Twitter; TV presenters demanded that the show be cancelled before it had even started.

"The morality police is powerful"

"We live in a country where showing massacres and beheadings on television is normal. But a puppet talking about sex is supposed to be immoral?" Talking about the wave of public indignation, Zayed Salem doesn't know whether to laugh or cry. Salem is a blogger. His reaction to the Internet outcry was to write a blog entry called "Ten things that are worse for children than Abla Fahita". The declaration spread like wildfire through Egyptian social media in a matter of hours. "This is a sign that there are a lot of people here who think exactly like I do. But it's difficult to fight the mainstream." The morality police – upright citizens and journalists faithful to the regime – in Egypt are powerful, he says.

Even so, they were unable to prevent the show going ahead. It is broadcast every Friday night on the private network CBC. Over the course of an hour, Aunty Fahita chats with guests and analyses the week's news. The show is significantly less political than the material people are used to hearing from the puppet. Before Abla Fahita switched to TV, she communicated with her fans largely via Internet video clips that subtly criticised the regime, or in tweets.

For example: on the day the government called on all Egyptians to go out onto the nation's public squares in their millions to support President Abdul Fattah al-Sisi, people simply refused to show their allegiance. There was not a single demonstration. And on this day, Abla Fahita just tweeted a picture of herself in bed, with the comment that today was a good day not to bother getting up. It was a slap in the face for the president.

One Abla Fahita hashtag currently doing the rounds on Twitter can be translated as "Hands off our clothes". It is an attack on Egypt's macho society, which believes it always has to dictate how women should dress. 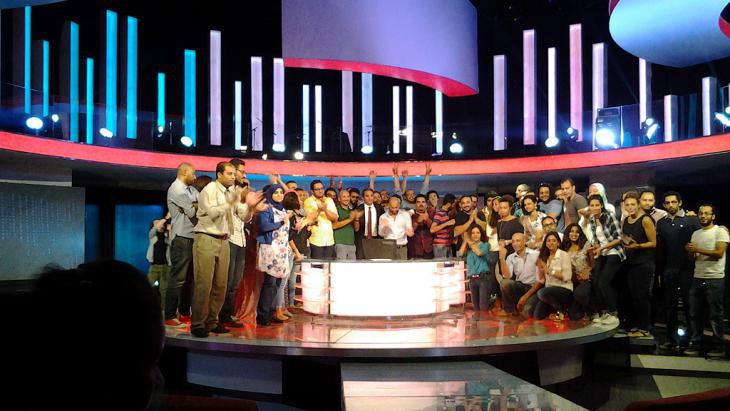 Is Abla Fahita sitting on an ejector seat? Her weekly show is broadcast from the same studio as the "Programme" by satirist Bassem Youssef, who announced that his show was ending on 2 June 2014, a week after Abdul Fattah al-Sisi won the presidential election. He had been the target of extensive threats

A puppet accused of terrorist links

Abla Fahita cares little about such norms. "She's funny, she's different, she's a little breath of fresh air. Our society needs something like that. After all, she makes us laugh," says the blogger Zayed Salem. Nevertheless, he wonders how long Abla Fahita will remain on screen. "There's always the possibility that the show will be taken off air. Everyone knows we live in a time of fantastic freedom of speech," he says, sarcastically.

Abla Fahita's fans are just waiting for an indignant viewer to hit on the idea of complaining to the police about her. She is not unknown to the judiciary: the public prosecutor's office investigated her in 2013. At the time, the accusation was that she had delivered secret terrorist messages to the forbidden Muslim Brotherhood via a Vodaphone ad.

The person behind Abla Fahita is a well-kept secret. Apparently not even the makers of the show "Live from the Duplex" know who writes the jokes for the puppet – a detail that is grist to the mill of the conspiracy theorists.

And so the whole nation watches spellbound every Friday night to see if Abla Fahita will commit a faux pas and be taken off air. "Live from the Duplex" is broadcast from the same studio as the "Programme" by satirist Bassem Youssef. Having received extensive threats, Youssef gave up in the summer of last year. The armchair that Abla Fahita settles into every Friday night could well turn out to be an ejector seat.

Home
Print
Newsletter
More on this topic
Bassem Youssef: All the world's a stage for Egyptian satire starCulture and censorship in Egypt: Cairo's guardians of moralityInvestigations against a cloth puppet in Egypt: Theatre of the absurd
Related Topics
Abdul Fattah al-Sisi, Arab bloggers, Egypt's army, Free speech and censorship, Freedom of the press, Media in the Arab World, Satire, Sexuality and eroticism in Islam
All Topics

Arab women played a leading role in the protest movement of 2011. Since then, ongoing social transformation has had a considerable impact on their lives. What is their assessment ... END_OF_DOCUMENT_TOKEN_TO_BE_REPLACED

They’ve already got the Louvre; they’ll soon have a Guggenheim Museum as well – and now the Emirates have added literature to their quest for cultural supremacy in the Arab world ... END_OF_DOCUMENT_TOKEN_TO_BE_REPLACED

Years in the making, Sisi's elite New Administrative Capital will isolate most Egyptians from their centres of government in an effort to fortify the regime against any social ... END_OF_DOCUMENT_TOKEN_TO_BE_REPLACED

Professor Timothy Brennan's "Places of Mind: A Life of Edward Said" is a detailed biography of one of the most important intellectuals of the twentieth century, taking us on a ... END_OF_DOCUMENT_TOKEN_TO_BE_REPLACED

China has long portrayed itself as a strong supporter of the Palestinian cause. It has also claimed that in sharp contrast to the stance of the USA, its position is based on ... END_OF_DOCUMENT_TOKEN_TO_BE_REPLACED

Recep Tayyip Erdogan, disappointed by the European Union’s reluctance to integrate Turkey into its ranks, has re-directed his country’s diplomacy toward the Maghreb and Africa to ... END_OF_DOCUMENT_TOKEN_TO_BE_REPLACED

Comments for this article: The taboo-challenging puppet

The article is more than wonderful .. thanks Elisabeth for your interest .. :)

END_OF_DOCUMENT_TOKEN_TO_BE_REPLACED
Social media
and networks
Subscribe to our
newsletter