'Above the law': Indonesia stampede puts focus on police force 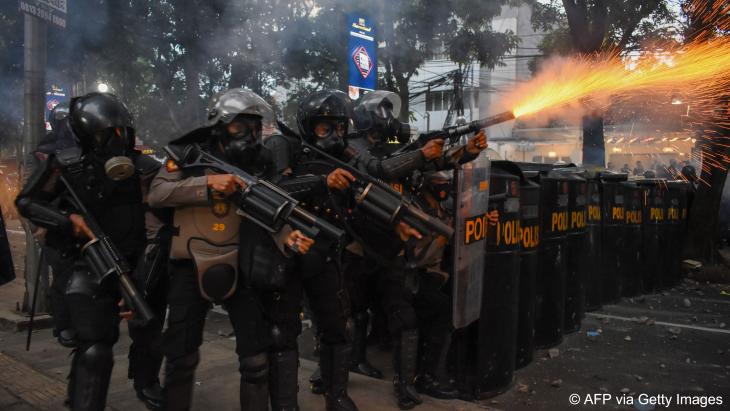 The Indonesian stadium stampede that left 131 people dead has sparked anger against the nation's police, whom critics have long accused of using excessive violence.

Police, who described the unrest on Saturday night as "riots", said they tried to force supporters to return to the stands and fired tear gas after they invaded the pitch. But survivors – who had described the police as wielding batons and firing tear gas at helpless spectators – accuse them of overreacting, which led to a crush that became one of the deadliest disasters in football history.

Indonesia's police has, along with the military, been involved for decades in suppressing dissent, quelling riots, crushing radical Islamist groups and anchoring the government's bloody fight against separatists in Papua, Aceh and East Timor. The police force has grown in power as an institution used for the security of the state since the fall of Indonesia's military dictatorship under Suharto in the late 1990s.

Data reviewed by journalists shows a force heavily armed and funded to the tune of hundreds of millions of dollars for tactical riot equipment since Joko Widodo rose to the presidency in 2014.

Spending on crowd control tactical gear – batons, tear gas, gas masks, shields and vehicles – has jumped in recent years, according to figures collected by Andri Prasetiyo, a researcher at NGO Trend Asia who analyses government purchases. They have spent close to a quarter of a billion dollars in less than a decade, he said, to kit out officers who use what experts say is often excessive force that almost always goes unpunished.

In 2014, the national police spent $6 million on tear gas. In 2022, that figure rose to $10 million. In the period between, it spent more than $68 million to procure tear gas. In East Java, where the site of tragedy in the city of Malang is located, police spent $3.2 million on batons in January 2022 alone.

"They use our tax money to kill us," said Prasetiyo.

The nine elite officers suspended after the incident remain under investigation and come from a unit notorious for its aggressive crowd control tactics. All are commanders in the Mobile Brigade Corps, or Brimob, a unit that acts as the special operations paramilitary unit for the Indonesian police force. Since the election of Widodo, they have been used to crush government opponents, activists say. Their coffers have since been heavily buffeted to militarise the force.

"In the past the most brutal force in the military were the special forces. I think they (Brimob) are now getting more notoriously known as a special force of the military," said Usman Hamid, director of Amnesty International Indonesia. "They are being used as a stick."

A national police force spokesman was not immediately available for comment.

While Saturday's stampede appeared to have little to do with politics, the displeasure of a society with its leaders can often be heard on the football terraces and some Arema FC fans were yelling obscenities at police as the chaos began.

Indonesia's Commission for Disappeared and Victims of Violence, or Kontras, recorded 677 incidents of violence by police between July 2021 and June this year that left 59 people dead and 928 injured. In the years before the COVID-19 pandemic, such incidents spiked. In 2018 to 2019, Kontras recorded 643 cases of violence. In the following year, it recorded 921 cases.

At least 10 protesters were unlawfully killed in post-election riots in 2019, most of them by gunshot, in cases that were not brought to justice, according to rights groups. "The police feel like they are above the law and can do anything they deem necessary," said Ardi Manto Adiputra, deputy director of human rights group Imparsial.

'Not fair or just'

Many Indonesians fear this cycle of violence will never end without punishment for officers. A key problem in bringing them to justice is little oversight inside or outside the force and close ties between the police and the government, said Fatia Maulidiyanti, coordinator for Kontras.

Experts say Widodo has helped place police allies in key positions after the force supported his most recent election bid, and the officers' presence within the Indonesian elite is blurring the lines.

It means little action is taken against officers who commit alleged crimes, said Maulidiyanti. "The sanctions against guilty officers are not fair or just. They are rarely brought to the criminal court," she said.

Transparency International ranks the national police force as one of the most corrupt institutions in Indonesia.

"If we don't do something, I think Indonesia is going to become a police state," said Amnesty International's Hamid.    (AFP)

END_OF_DOCUMENT_TOKEN_TO_BE_REPLACED
Social media
and networks
Subscribe to our
newsletter