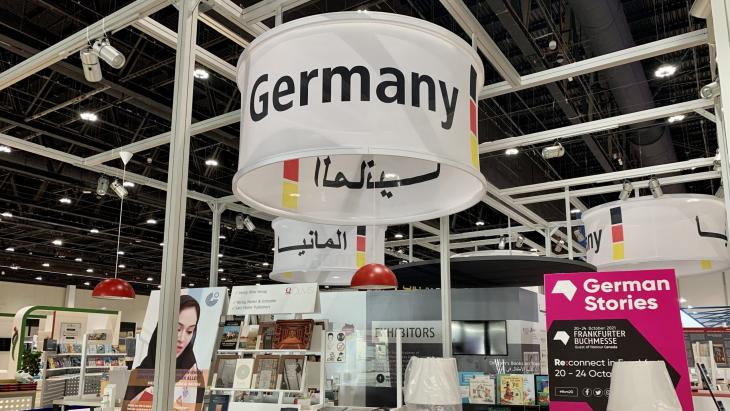 These days, at the Abu Dhabi Book Fair, the problems of the Arab book market and Arab literature are discussed with astonishing frankness. It has also become an international event – on a scale not seen since the Arab revolutions. Stefan Weidner reports from Abu Dhabi

It almost felt like Groundhog Day: for the third time in a row, Germany was the official Guest of Honour at this year's Book Fair in Abu Dhabi. The pandemic sent the German appearance into repeat mode: in 2020, the event was cancelled due to coronavirus, while in 2021, there was only a mini version, with most of the events taking place online.

This year more than made up for it, however. Under the motto "German Stories", a huge number of events were held on a truly dazzling stage. Practically everyone who is anyone in the German-Arab literary and translator scene received an invite – finally, you could say, the Frankfurt Book Fair's long-standing co-operation with the Abu Dhabi Book Fair had paid off.

This was also because the fair in Abu Dhabi, organised by the "Centre for the Arabic Language", has now trumped all the other Arab book fairs (almost every Arab country holds at least one), becoming not only an intra-Arab, but an international forum for exchange. Here and nowhere else do you meet authors, friends and colleagues who are otherwise at home in Canada, Russia, Great Britain, Beirut, Upper Egypt, Kuwait, Iraq or Morocco.

Is literature part of the creative industry?

In other areas, too, Abu Dhabi is striving to transform the Arab literary scene into a well-integrated part of the globalised creative industry. The will may be there, but the challenges are immense. Just how sensible it is to focus exclusively on commerce when it comes to culture and literature was left out of the equation. At the International Congress of Arabic Publishing and Creative Industries, which took place ahead of the fair, this question was the proverbial elephant in the room that no one was willing to address, even though it was clearly at the forefront of everyone's mind the entire time. 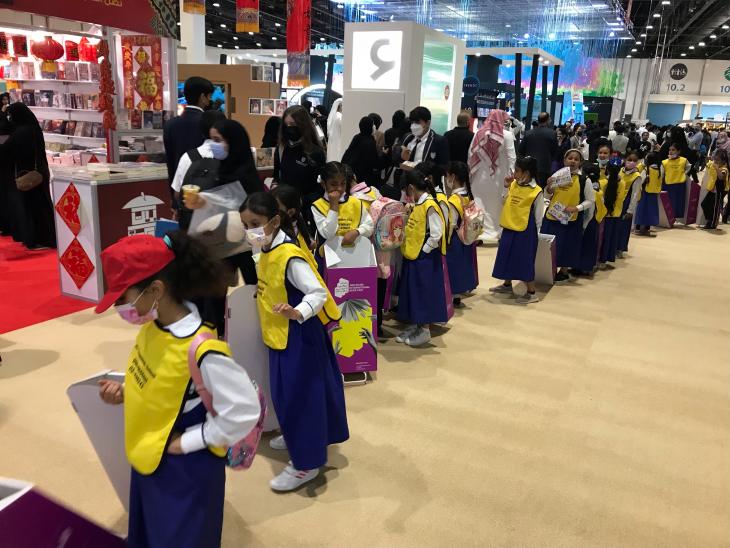 The readers of tomorrow: a school class at the book fair in Abu Dhabi. New, small bookshops and innovative publishing houses are springing up all over the Arab countries, writes Stefan Weidner. "Admittedly, this almost gives the impression that there are now more people working in the literary business than readers. Particularly since the latter jump at titles that promise superficial entertainment or life advice and 'self-improvement' – as is to be expected in a neoliberal book market. Audiobooks have also recently found a place in the Arab world: people prefer to listen while cooking and driving. But here, too, good literature tends to lose out, just like in our latitudes"

But doesn't the non-commercialisability of Arabic literature provide a kind of sanctuary against the mainstreaming of European-American tastes that inevitably goes hand-in-hand with globalisation? Isn't commercial integration as a "creative industry" simply post-colonial appropriation through the back door? Admittedly, authors and publishers also want easier distribution channels, better income, fewer customs hurdles and less bureaucracy. But especially here, where the regulations and customs laws of individual Arab countries matter, even an influential state like the United Arab Emirates can find that its hands are tied.

Are e-books the future?

No wonder, then, that the focus of the congress at this book fair was primarily on electronic media: as is well known, they do not take national borders into account. So is the future of the Arabic book tied to the e-book? According to Michael Tamblyn, CEO of e-book platforms Kobo and Tolino, it definitely is. He announced that his company will become the first e-book company to enter the Arab market. Let's hope the Arabs will be able to afford the e-readers that go with them and that good literature will also find its place on this platform (so far, it is more likely to be found in Arabic on the Jordanian platform Abjjad, which is hereby recommended).

While the Arabic e-book business is still in its infancy, Amazon, now with a foothold in Egypt, has sent Egyptian booksellers into a spin, reports Sherif Bakr from the Supreme Council of Culture there. All of a sudden, people are noticing that  retailers have no usable lists of available books and no uniform standards to be able to re-order titles effectively and quickly.

Despite this, new, small bookshops and innovative publishing houses are springing up everywhere; admittedly, this almost gives the impression that there are now more people working in the literary business than readers. Particularly since the latter jump at titles that promise superficial entertainment or life help and "self-improvement" - as is to be expected in a neoliberal book market. Audiobooks have also recently found a place in the Arab world: people prefer to listen while cooking and driving. But here, too, good literature tends to lose out, just as it does in our part of the world. 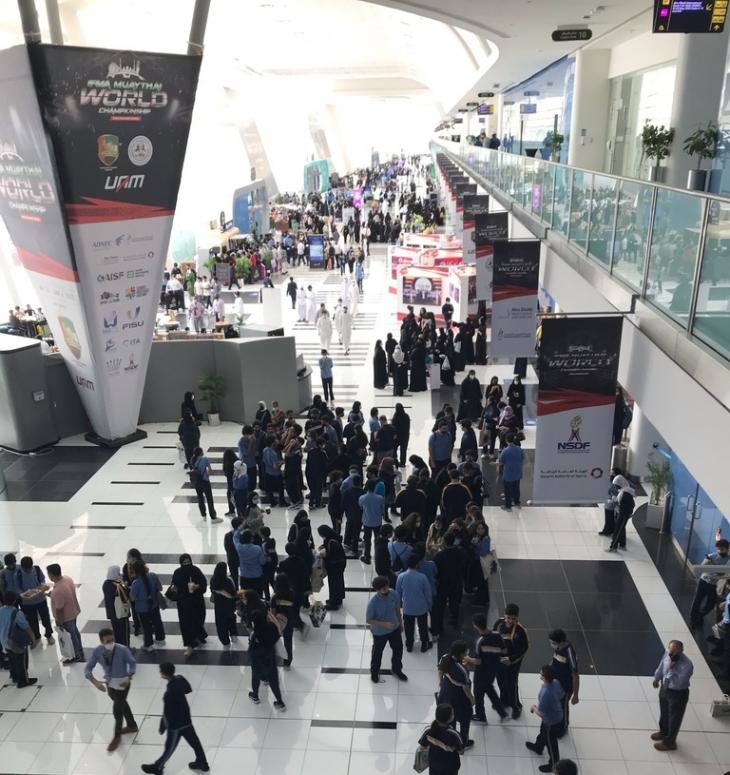 The Arab literary industry as part of a globalised creative industry: the question of how sensible it is to focus exclusively on commerce in matters of culture and literature is left out. Doesn't the non-commercialisability of Arabic literature provide a kind of sanctuary against the mainstreaming of European-American tastes that inevitably goes hand in hand with globalisation? Isn't commercial integration as a "creative industry" simply post-colonial appropriation through the back door? Admittedly, authors and publishers also want easier distribution channels, better income, fewer customs hurdles and less bureaucracy. But especially here, where the regulations and customs laws of individual Arab countries matter, even an influential state like the United Arab Emirates has its hands tied

Nicholas Carr, a well-known British critic of net-based media, warned against abandoning the book as a printed medium. Printed paper alone protects us from the distractions that electronic platforms constantly offer us, he argued. It alone teaches us concentration and deeper reading and understanding. But his reservations went mostly unheard.

Immediately afterwards, during a panel on the question of whether social media are the new book market, representatives of TikTok and Twitter took to the stage and tried to sell the distracting power of their platforms as meaningful reader engagement. It was obvious, however, that all this is of no use to authors as long as their books are being downloaded as PDFs on illegal platforms. Enter one of Abu Dhabi's most meaningful new initiatives, the Emirates Reprographic Rights Management Association (ERRA).

The aim is to create an effective rights management system. Its intention is not, as the head of ERRA, Rawan Al-Dabbas, pointed out, to set up a kind of copyright police, but to create conditions that make book piracy on the Internet superfluous. And the most important condition for this is that Arabic books are accessible to be purchased easily and legally by anyone who wants to.

Translation funding comes to nothing

The other major topic at the book fair, a theme picked up on by Germany's presentation was the issue of how better to promote the diverse, high-quality, but at the same time jungle-like, and practically unexplored realm of Arabic literature in Europe and Germany. To date, Arabic literature has hardly been a profitable business for literary scouts and agencies. As a result, its promotion still relies on coincidence and private initiatives.

One game-changer could be the promotion of translations by Arab states. But this is precisely the problem: the translation funding that is available in Abu Dhabi, for example, does not offer publishers the opportunity to discover books on their own and then apply for funding for these titles, as the Europeans or Israel do with their literature and translation funding. Abu Dhabi only promotes titles that committees set up specifically for this purpose propose for translation and want to see translated. But since publishers do not like to be told what to publish, such funding tends to come to nothing.

As long as the Arab side refuses to reward the initiative of publishers and translators, this situation will not change. Put plainly: it is the Arab institutions themselves that are placing stumbling blocks in the way of Arabic literature hoping to attract a wider audience. A recent survey by translator Sandra Hetzl did reveal that the number of titles being translated from Arabic continues to rise. But the increase is so slow as to be almost imperceptible, especially since bestsellers with media impact have to date been largely absent.

The poet reads the riot act

And literature itself? There was a noticeable shortage of stars, but at least Adonis made an appearance, the now 92-year-old, still agile and feisty Lebanese-Syrian poet. He almost managed to pull off a coup by bringing along his Parisian friend Peter Handke, but the latter had to cancel for family reasons. As was to be expected, however, Adonis read his hosts the riot act.

During a lecture on Taha Hussein (1889-1973), the modern classic of Egyptian literature, Adonis loudly pointed out that in the thirties and forties, the Arabs had certainly still put their faith in progress, but that down the years they had unfortunately confused progress with mere economic growth (although that is surely not a uniquely Arab problem).

This is how the post-modern glittering world in the Gulf has come to co-exist with reactionary social conditions. This was also evident in the fearful, if not repressive, treatment of literature by the rulers. Ultimately, he advised them to follow Charles de Gaulle's example: when de Gaulle's advisors suggested that the president arrest Jean-Paul Sartre, de Gaulle retorted by asking who was he – de Gaulle – that he should dare to arrest Voltaire himself.

If Adonis, this current Arab Voltaire, is allowed to return to Paris without being arrested, at least the new authoritarian ruler of Abu Dhabi, Mohammed bin Zayed, can boast that he matches Charles de Gaulle for tolerance.

Anti-Semitic motifs have no place at Germany’s documenta art show or anywhere else in the world, stresses Meron Mendel, director of the Anne Frank Educational Centre in Frankfurt ... END_OF_DOCUMENT_TOKEN_TO_BE_REPLACED

A new exhibition, "Syria – Against Forgetting", at Cologne’s Rautenstrauch-Joest-Museum focuses on Syria's artistic and cultural heritage and pays tribute to the country before ... END_OF_DOCUMENT_TOKEN_TO_BE_REPLACED

Madrid's about-face on the Western Sahara conflict has enraged Algeria. Trade relations have been frozen unilaterally and a cut in gas supplies to Europe could be in the pipeline ... END_OF_DOCUMENT_TOKEN_TO_BE_REPLACED

Yazan Khalili is spokesman for The Question of Funding, a collective of artists taking part in the leading German contemporary art festival Documenta 15. Here, he responds to ... END_OF_DOCUMENT_TOKEN_TO_BE_REPLACED

Mourad al-Marouai was just nine when a landmine killed him on a beach in war-torn Yemen, a tragedy that will haunt his family forever. After a swim, the little boy "suddenly ... END_OF_DOCUMENT_TOKEN_TO_BE_REPLACED

END_OF_DOCUMENT_TOKEN_TO_BE_REPLACED
Social media
and networks
Subscribe to our
newsletter