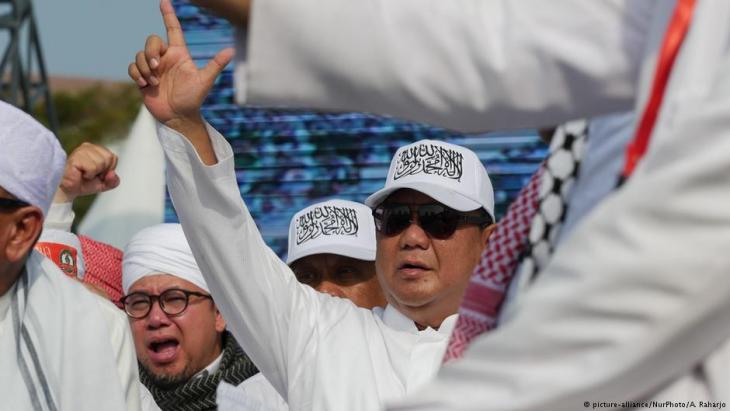 Indonesiaʹs much vaunted Pancasila system appears to be faltering. Recent years have seen a spate of blasphemy convictions, most notably that of Ahok, ex-governor of Jakarta. Amending existing legislation is not, however, on the agenda of electioneering politicians keen to mobilise conservative Muslim voters. By Rafiqa Qurrata Aʹyun

This year, in the run-up to Indonesiaʹs 2019 presidential election there was another high profile blasphemy conviction, when Meiliana, a Buddhist woman of Chinese heritage, was sentenced to eighteen monthsʹ jail for complaining about the volume of the mosque loudspeakers in her neighbourhood in North Sumatra. Her High Court appeal was rejected in October 2018.

It all began in July 2016 when Meiliana complained to the one of her neighbours that the mosqueʹs speakers used for the adzan (call to prayer) were too loud. At first the village leader treated Meilianaʹs complaint as an issue that was appropriate to be resolved through mediation. Although some people said that Meiliana had blasphemed, according to her lawyer, Ranto Sibarani, the caretaker of the mosque had forgiven Meiliana for this.

However, a rumour spread in her neighbourhood that Meiliana wanted adzan to be banned altogether. This rumour provoked public anger and in the week that followed vigilantes burned down numerous Buddhist temples. Eight rioters were arrested and convicted, receiving jail terms of one to four months.After investigating the riot, the local police described Meiliana as the provocateur and formally accused her of blasphemy. However, in August 2016 the director of the Criminal Investigation Agency of the Indonesian National Police (Bareskrim Polri) stated that Meilianaʹs request that the volume of the mosqueʹs loudspeakers be reduced did not amount to blasphemy. As a consequence, six months after Meiliana complained about the noise from the mosque, the police were yet to lay a charge for blasphemy.

Within the same period, a series of mass rallies in Jakarta were organised by a vigilante group, the Islamic Defenders Front (FPI), along with Ahokʹs political opponents to pressure the police to declare Ahok a blasphemy suspect.This inspired the Alliance of the Students and Independent Communities (Aliansi Mahasiswa dan Masyarakat Independent Bersatu) in North Sumatra to request a fatwa from the Indonesian Council of Islamic Scholars (MUI) of Tanjungbalai region in early January 2017, stating that Meiliana has insulted Islam. 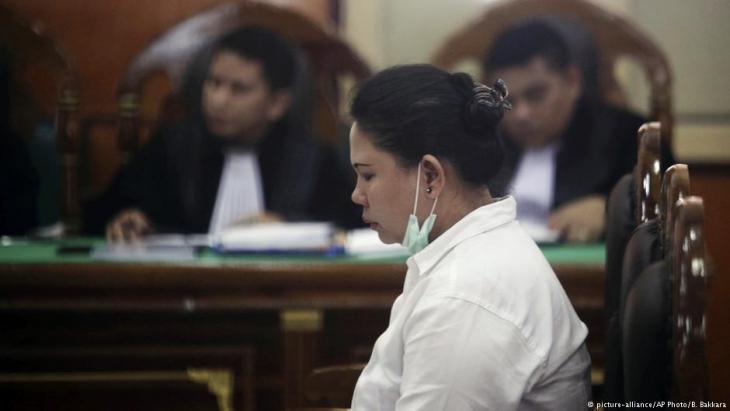 Setting a new precedent? Prior to Meilianaʹs conviction, three categories of blasphemy existed. Firstly, cases related to different interpretations of religion, when a member of a religious minority promotes an idea that the majority considers deviant. Secondly, cases where the defendant has insulted a part of a religion or a religious symbol, as Ahok was found to have done when he quoted a Koranic verse and insinuated that the verse has been used by his political opponents to deceive voters. Thirdly, in cases relating to proselytisation. Since blasphemy is not comprehensively defined, the Meiliana decision could set a precedent for interpreting other complaints about noisy mosque loudspeakers as blasphemy

The MUI is a quasi-state organisation that is responsible for producing religious opinions which serve as the main reference when police name blasphemy suspects. At this time, the MUI still did not issue a fatwa. However, the North Sumatra branch of Indonesiaʹs second-largest Islamic organisation, Muhammadiyah, did release a statement attributing Meliana with responsibility for provoking the riot.

In mid-January 2017, the leader of the FPI Rizieq Shihab visited Medan, the capital of North Sumatra, to drum up support for the Islamic movement inspired by the anti-Ahok rallies. A week later, on 24 January 2017, the MUI of North Sumatra finally released a fatwa, accusing Meiliana of blasphemy. This fatwa became the basis for the police continuing their investigation and bringing the case to court. It also became the main evidence used by the judge in finding Meiliana guilt of blasphemy.

Guidance but no regulation

In many places in Indonesia, recitations from the Koran are played on mosque loudspeakers before and after the five daily calls to prayer. Although this is a long-established practice, it is not unheard of for disputes to arise about volume. However, this is the first time such as dispute has resulted in the criminal prosecution of the complainant. There was a civil case related to a similar issue recorded in 2013 in Aceh, but the charge was eventually revoked because of pressure from locals.

The government has tried to prevent such disputes through instructions issued by the director general for Islamic community guidance at the Ministry of Religious Affairs. The idea of limiting the use of loud speakers has also been suggested by leading Islamic figures, including the late Abdurrahman Wahid – a former Nahdlatul Ulama (NU) leader who was also known as a moderate Islamic thinker. Vice President Jusuf Kalla – an NU advisory board member – has also recommended moderating the volume of adzan. Yet this suggestion is hardly ever taken up by mosques, even those affiliated with NU, and many still use high volume loudspeakers. 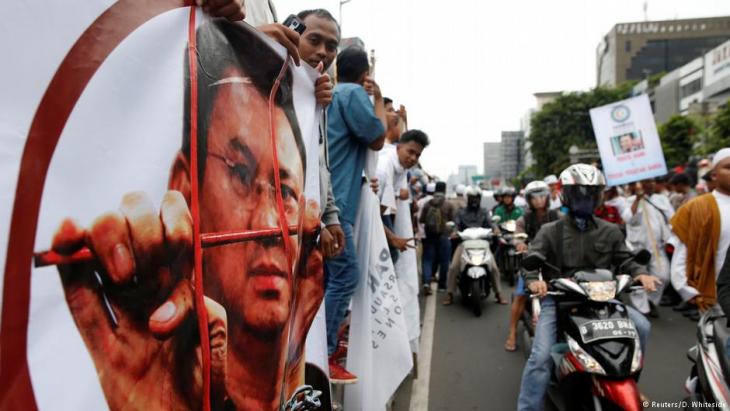 ʹAhokʹ Purnama had urged voters to ignore rivals who cited a Koranic verse stating they should reject non-Muslim leaders, with the then governor saying people were being manipulated into voting against him. However, judges ruled the remarks amounted to blasphemy against Islam and he was then sentenced to two years' jail in May 2017, having lost the election to a Muslim challenger. He was finally released on 25.01.2019

Melianaʹs conviction has added to a growing number of blasphemy cases. More than 130 people have been convicted of blasphemy since the beginning of the democratic era in 1998, a ten-fold increase from the previous authoritarian period.

Indonesiaʹs blasphemy law (article 156a of the Criminal Code) defines blasphemy as an act which ʹhas the character of being at enmity with, abusing or staining a religion adhered to in Indonesiaʹ, when this is done with ʹthe intention to prevent a person adhering to any religion based on belief in the almighty God.ʹ

Notably, although the definition theoretically includes an act blaspheming one of the official religions in Indonesian other than Islam –Protestantism, Catholicism, Hinduism, Buddhism and Confucianism – in most of the recorded cases people have been convicted of blaspheming Islam.

A new type of blasphemy

Prior to Meilianaʹs conviction, three main kinds of actions had led to blasphemy prosecutions. Firstly, cases related to different interpretations of religion, when a member of a religious minority promotes an idea that the majority considers deviant. Secondly, cases where the defendant has insulted a part of a religion or a religious symbol, as Ahok was found to have done when he quoted a Koranic verse and insinuated that the verse has been used by his political opponents to deceive voters. Thirdly, in cases relating to proselytisation. Meilianaʹs may be regarded as a new kind of blasphemous act. Since blasphemy is not comprehensively defined, the decision could become a new precedent for interpreting other complaints about noisy mosque loudspeakers as blasphemy.

Moreover, a provision which extends the criminal prohibition on blasphemy was recently included in the mass organisation law passed by President Joko Widodo (Jokowi), which could allow for the criminalisation of members of an organisation that indirectly engages in blasphemy. The latest draft of the Criminal Code amendment also expands the blasphemy offence.

In the run-up to the 2019 presidential election, no political campaigns advocate revoking the law. Indeed, it would seem that both pairs of candidates, Jokowi-Maʹruf Amien and Prabowo Subianto-Sandiaga Uno, support the use of the blasphemy law because it is endorsed by conservative Muslims.

Jokowiʹs decision to choose Maʹruf Amin – the MUIʹs chairman who released the fatwa that supported Ahokʹs blasphemy case – as his running mate indicates that he considers garnering the support of conservative Muslims to be more important than minority rights. In the case of Prabowo and Sandiaga, their support for the blasphemy law is also unsurprising given the support they receive from the so-called ʹ212 Alumniʹ, the collection of hardline Islamic groups that participated in the protest against Ahok on 2 December 2016.

The stance of the candidates who are running in the 2019 presidential election may well indicate that Indonesiaʹs blasphemy law is likely to continue to be regularly used in future. Given that the use of the blasphemy law indirectly allows politicians to mobilise support from conservative Muslims, more are likely to be charged with the offence in future, in line with escalating identity politics. As a result, blasphemy convictions and discrimination against minority groups are also likely to increase.

Water buffalo and oxen have been part of the work in Indonesian fields for centuries. But the draught animals are no strangers to sport either, as can be seen in two traditional ... END_OF_DOCUMENT_TOKEN_TO_BE_REPLACED

According to the latest Reuters tally, more than 2.54 million people are now reported to have been infected by the novel coronavirus globally and 177,004 have died. As Muslims ... END_OF_DOCUMENT_TOKEN_TO_BE_REPLACED

Around the Islamic world, lockdowns and curfews are being extended and religious ceremonies are being cancelled outright in the hope of slowing the spread of COVID-19. Here’s the ... END_OF_DOCUMENT_TOKEN_TO_BE_REPLACED

While some are beginning to protest the lockdown, others are unable to bury their loved ones in accordance with Islam. Here’s the latest from across the region END_OF_DOCUMENT_TOKEN_TO_BE_REPLACED

Coronavirus continues unabated. Iran remains a hub of infection, war-torn Syria has recorded its first case and Yemen is bracing itself for the worst. Here’s the latest from ... END_OF_DOCUMENT_TOKEN_TO_BE_REPLACED

As COVID-19 sweeps across the globe, it is forcing religions to adapt and take action to prevent infection. But experts warn against using the crisis to fuel conspiracy theories. ... END_OF_DOCUMENT_TOKEN_TO_BE_REPLACED
Author:
Rafiqa Qurrata Aʹyun
Date:
Mail:
Send via mail

END_OF_DOCUMENT_TOKEN_TO_BE_REPLACED
Social media
and networks
Subscribe to our
newsletter