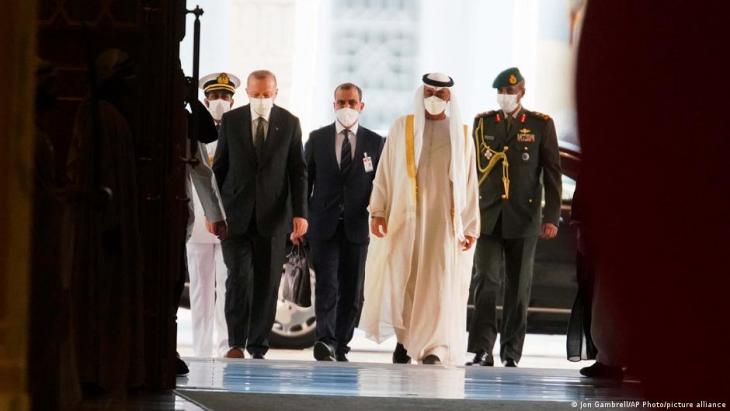 It seems yesterday's words are water under the bridge. Turkish foreign policy is currently undergoing a profound re-orientation: declared enemies are to become partners, opponents allies. But not when it comes to Greece. By Ronald Meinardus

President Erdogan's official visit to the United Arab Emirates (UAE), until recently regarded by Ankara as a den of iniquity, undeniably took the world of international diplomacy by surprise. Israel is now top of the list of co-operation partners to be wooed. President Isaac Herzog's upcoming visit to Ankara is expected to bring about a thaw in relations between the two countries. Meanwhile, normalisation talks with Armenia are making progress and Erdogan is even seeking rapprochement with Abdul Fattah al-Sisi's Egypt.

Turkey is seeking a way out of the diplomatic isolation that Ankara has become bogged down in over the past few years: "Turkey has found itself encircled by an alliance between the U.S., Greece, Greek Cypriots, Israel and Egypt, a situation that became detrimental to its geostrategic interests in the region," is how Turkish expert Barcin Yinanc describes the situation.

The driving force behind this alliance, in which Turkey has no part, is the Greek government. In recent years, Athens has succeeded in establishing more or less formal co-operation structures in the Eastern Mediterranean (and beyond), the common denominator being the exclusion of Turkey: "Greece has worked to transition the Eastern Mediterranean Gas Forum (EMGF) from an energy organisation into an informal political and security coalition that spans from Greece’s immediate periphery in the Eastern Mediterranean to the Arab Gulf, with a series of military exercises, dialogues and arms deals that serve Greece’s interests in countering Turkish encroachment", reads an analysis by U.S. think tank New Lines Institute for Strategy and Policy.

Athens' diplomatic advances have had Washington's political blessing from the start. The American strategic shift towards the Greeks is largely the result of the dislocation in U.S.-Turkish relations and Biden's deep frustration with Erdogan. Senior U.S. officials have made no secret of the fact that they now regard Greece – rather than Turkey – as the senior strategic partner in the region. 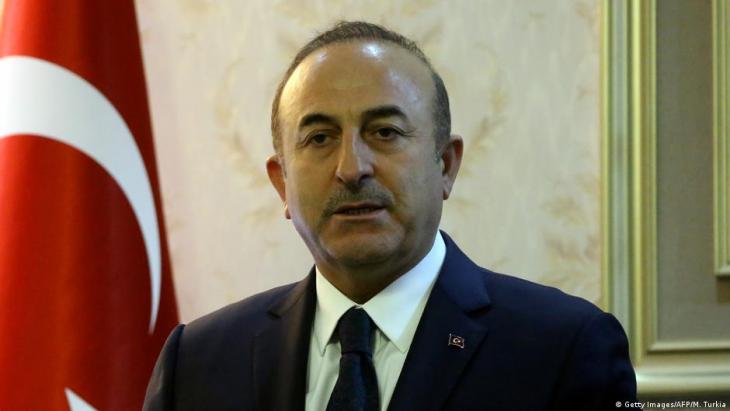 Turkish Foreign Minister Mevlut Cavusoglu sparked an outcry in Athens when he said in February that Greece should forfeit its sovereignty over numerous islands in the East Aegean, including Rhodes, Kos and Samos, because it had militarised them unlawfully. "The dispute over whether and to what extent Greece may station soldiers and build fortifications on its islands off the Anatolian mainland is not new and dates back to the 1960s," writes Meinardus. "It is one of several sub-conflicts in the Aegean that also encompass the extent of territorial waters, the width of national airspace and, last but not least, the delimitation of the continental shelf"

This unflattering assessment relating to Turkey's status emerged several weeks ago. Whether and to what extent Putin's war of aggression against Ukraine and the accompanying geostrategic upheavals will influence Washington's strategic planning regarding the Eastern Mediterranean remains to be seen.

Recep Tayyip Erdogan's reformed foreign policy focuses on shedding his tarnished image in the eyes of the West and presenting himself as a co-operative statesman, even as a mediator in difficult times. In 2021, during the Afghanistan crisis, the Turkish president offered his services as a negotiator. Now, too, in the Ukraine war – for many reasons, a far more precarious situation for Ankara – Erdogan is looking for ways to boost his own profile and that of his country on the international stage.

It is striking that Greece, not to mention the Republic of Cyprus, has no place in Erdogan's international "charm offensive". You might think the opposite would be the case. Yet, while Turkey seeks a balance on other foreign policy fronts, tensions with its neighbour to the west have increased in recent months. Hardly a day goes by without reports of Turkish "provocations" in the Greek media. The newspapers are reporting large-scale violations of airspace over Greek islands in the Aegean. The most recent outcry at the foot of the Acropolis was triggered by remarks made by the Turkish foreign minister, Mevlut Cavusoglu, who, while referencing what Turkey considers the unlawful arming of the East Aegean islands, bluntly questioned Greece's sovereignty.

The dispute over whether and to what extent Greece may station soldiers and build fortifications on its islands off the Anatolian mainland is not new and dates back to the 1960s. It is one of several sub–conflicts in the Aegean that also encompass the extent of territorial waters, the width of national airspace and, last but not least, the delimitation of the continental shelf.

What is new and worrying – not merely from a Greek perspective – is that Ankara is questioning Greek sovereignty over the islands in connection with the issue of militarisation.

"Greece’s sovereignty over the islands was and remains dependent upon demilitarisation", says a letter from the Turkish ambassador to the United Nations, Feridun Sinirlioglu, to the secretary-general of the world organisation, Antonio Guterres. While the diplomat's letter from last September would likely have disappeared into the UN archives in New York without causing any particular international stir, the fact that the Turkish foreign minister insisted on calling attention to the process raised considerable political and diplomatic dust.

Athens rejected Turkey's challenges, citing, among other things, the right to self-defence. The Greeks then sought political support from friends and allies. This was not long in coming: the governments in Washington and London immediately backed Athens.

The reaction of the European Union was also clear: a spokesperson called the Turkish foreign minister's statements "counterproductive". They contradicted the efforts regarding "de-escalation in the Eastern Mediterranean", which EU leaders have repeatedly declared to be prerequisite for any further deepening of Ankara's EU relations. In his statement, the EU spokesperson opted for the brass tacks approach: "Greece’s sovereignty over these islands is unquestionable. Turkey should respect it, refrain from provocative statements and actions." 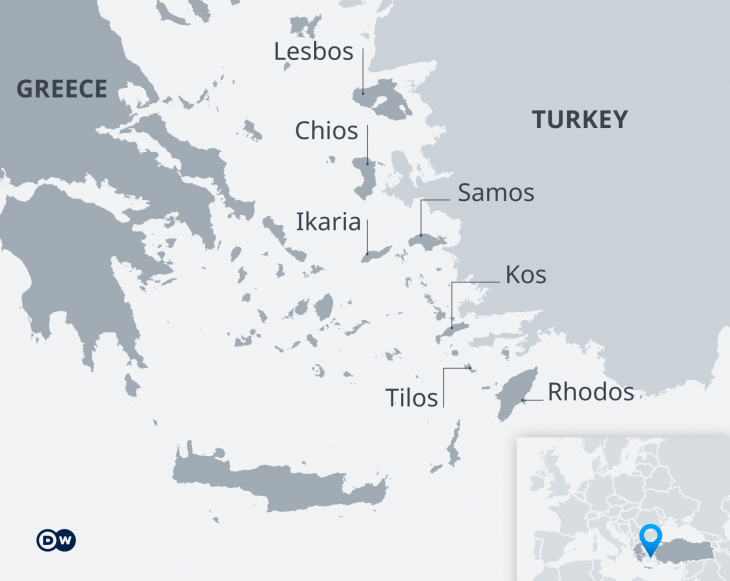 For years, Greece and Turkey have been arguing over the territorial waters around the Greek islands in the East Aegean Sea, which lie up to 500 kilometres from Athens off the Turkish mainland. The nib of the problem: Ankara refuses to recognise that the Greek islands have their own continental shelf – as stipulated by international maritime law. While the Greeks invoke international law and argue legally, Ankara, which has not ratified the Convention on the Law of the Sea, continues to push for a political solution

One can only speculate about the timing of Turkey's initiative against its neighbour. Provocative statements – to adopt the EU's diction – are part of the daily routine in Greek-Turkish relations; currently, they are feeding fears in Greece that Ankara is intent on changing the territorial status quo in the Aegean, if necessary by undermining international law. Statements issued by Turkish government representatives continue to fuel the deep-seated sense of threat that has built up over decades.

Owing to recent developments, numerous Greek columnists are now drawing parallels between Putin's expansionist policy of violence and Erdogan's revisionist intentions: "Despite their obvious differences, the similarity between the Russian method of sending ultimatums and that of Erdogan vis-a-vis Greece and the Republic of Cyprus are particularly worrying," opined former deputy foreign minister, Yannis Valinakis, in a commentary published shortly before Russia invaded Ukraine.

But harsh words and hostile insinuations are only one side of the Turkish-Greek relationship. The co-existence of conflict and co-operation has always been a characteristic of bilateral relations. While the headlines were dominated by negative reports, leading diplomats from both countries met in Athens at the end of February for the 64th round of Turkish-Greek exploratory talks. It is the oldest forum of diplomatic conflict resolution negotiations. What happened behind the closed doors is not known. The mere fact that the two sides are still talking can be celebrated as a success.

Around the same time as these exploratory talks, dealing with the major issues on the bilateral agenda, which is rich in conflict material, the deputy foreign ministers of the two countries also sat at the same table to negotiate the continuation of the so-called "positive agenda". Negotiators said that progress had been made on 17 of the 25 dossiers. Specifically, these are practical questions of cross-border co-operation in tourism, trade and transport, or the recognition of vaccination certificates.

Such constructive progress rarely merits a headline in the media of the neighbouring countries. Here, too, the (problematic) journalistic principle that no news is good news would seem to apply.

It is, therefore, all the more astonishing – and a sign of hope – that despite the constant negative media coverage, a recent opinion poll found that 70 percent of Greeks and almost 60 percent of Turks favour peaceful co-existence with their neighbour.

Since President Abdul Fattah al-Sisi seized power in Egypt in 2013, he has ruled the country with an iron fist. Civil society, opposition and free press struggle to survive. Tens ... END_OF_DOCUMENT_TOKEN_TO_BE_REPLACED

The lack of grain supplies from Ukraine is forcing Egypt to act. Now even the Toshka project is being revived to grow grain in the desert. Birgit Svensson travelled to see it END_OF_DOCUMENT_TOKEN_TO_BE_REPLACED

In this unusually beautiful book of images and text, published in German and Arabic, artist Marianne Manda presents her own unique take on the megacity of Cairo. In over fifty ... END_OF_DOCUMENT_TOKEN_TO_BE_REPLACED

A stage, lights, a mesmerised audience: it looks like an Egyptian folkloric concert, but Umm Sameh is singing to heal the sick by driving out the demons that possess them END_OF_DOCUMENT_TOKEN_TO_BE_REPLACED
Author:
Ronald Meinardus
Date:
Mail:
Send via mail

END_OF_DOCUMENT_TOKEN_TO_BE_REPLACED
Social media
and networks
Subscribe to our
newsletter