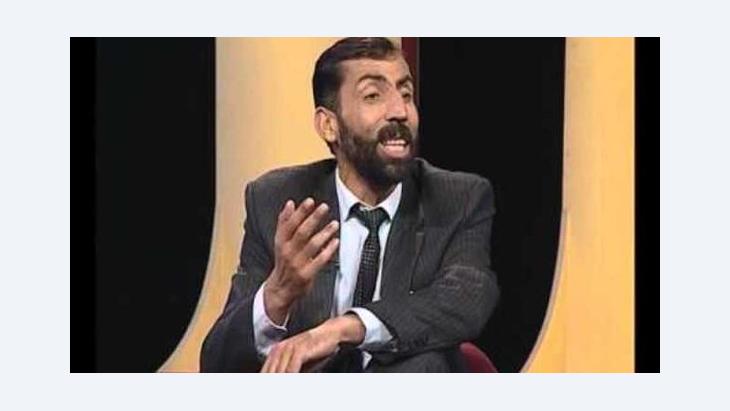 Afghan Comedian Asif Jalali
Wit at a Time of War

According to Afghan comedian and TV star Asif Jalali, it is much easier to make people in Afghanistan cry than it is to make them laugh. In his TV show he sets out to do the latter, with great success. By Tobias Matern

If he is going to do the interview at all, he says, he would like to know what's in it for him. It's all very well for the newspapers in far-away Germany to get all the glory and the extra sales that his photo will bring, but what will he get out of it? There is not even any money on offer for the interview. It is unfair. Not a good deal, according to Asif Jalali. He sips his green tea, eats a fig, and says nothing. The silence seems to last for an eternity as he continues to gaze out of the window at the local bazaar, where traders are selling their wares: pomegranates, bananas, oils and pots and pans.

Finally, Asif Jalali turns his gaze to his interviewer, his pupils dilated, and his expression registering his displeasure at the situation. With the interview apparently a lost cause and the interviewer about to pack up and go home, Jalali suddenly blurts out: "Got you, didn't I!" Roars of laughter resound through the tea shop as a group of men nearby celebrate the success of the joke.

They gather around Jalali, slapping him on the back, applauding his achievement in taking in another victim. This is what "Uncle Asif", as he is known here, does. It is expected of him, and this man with his large brown eyes, prominent nose and black beard knows exactly how to keep his fans happy. His speciality is creating these moments of stern seriousness, pushing them to the point where they become almost unbearable before suddenly letting everyone in on the joke.

Macabre and liberal all at once 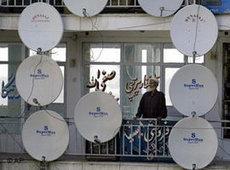 Since the Taliban were toppled in Kabul, the number of private television stations has been on the rise. One of these stations is TV1, which broadcasts Asif Jalali's weekly comedy show

​​Jalali's style of humour has made him Afghanistan's most popular comedian. His show "Shabkhand" (evening laughter) currently runs twice a week on TV1, one of the numerous private channels that have sprung up in the capital since the Taliban were toppled. But how does comedy fit in in a country where death is an everyday occurrence and uncertainty a way of life, and where, as Jalali puts it, it is "much easier to make people cry than it is to make them laugh"?

The comedian wants to amuse his audience, distract them from the horrors and catastrophes of daily life. According to official statistics, around 70 per cent of the population is currently under 25 – and it is they who provide the majority of the country's audience for comedy. Jalali's show is more liberal than most: the studio audience includes women who choose to wear their headscarves rather more loosely than the norm dictates. In a country where men and women are usually expected to celebrate weddings separately, such things are unusual.

Though the comparison has more than a touch of the macabre, the 47-year-old has a very particular way of describing his style of humour. "When I tell jokes," he says, "I am like a B-52 bomber." He pauses; the men in the tea shop are hanging on his every word. "By the time the bombs hit their target, the planes are already miles away. They have flown off to somewhere else."

His jibes are aimed at politicians and other powerful men in Afghanistan, but without naming any names. Before anyone has had time to take his jokes too personally, Jalali says, he has moved on to the next target, always trying to make sure that he covers his tracks as quickly as possible. But he does have one taboo, one area he never makes jokes about: "I am Muslim. I don't make fun of Islam," he says.

Hope in a time of catastrophe 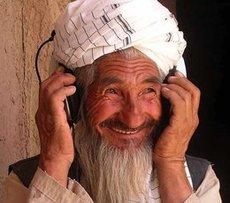 Humour at a time of war: according to Tobias Matern, "Distraction is extremely important in a country where catastrophes are a daily occurrence"

​​A particular source of pride for Jalali is the fact that the people "out there" – he points to the bazaar outside the tea shop – see him as their spokesperson. "I speak for the people who are not usually heard." As a child growing up in the eastern Afghan province of Laghman, his talents as a solo entertainer were already plain for all to see; he was always telling jokes. It was a talent that could cause problems. On one occasion his family refused to take him seriously when he told them of the sudden death of a neighbour.

He was reprimanded for talking nonsense, told not to joke about such things, until his parents found out the truth of the matter for themselves and realised he had not been lying. Even when the Taliban were in power he was performing, entertaining at small private parties – until the Taliban morality police turned up to investigate and make sure that no boundaries were being crossed.

Of course, life in Afghanistan is still anything but carefree; decades of war and uncertainty have left their mark on Asif Jalali too. Some years ago, one of his brothers disappeared without a trace. The comedian believes that one of Afghanistan's criminal warlords must have been responsible. Another of his brothers fell victim to the drugs that are still so prevalent and readily available in the country. Jalali relates all of this without any hint of emotion, as if he has accepted that these things cannot be changed and that he must come to terms with them.

He prefers to talk about how proud he is of the fact that his job has made it possible for him to look after his large family. Although not a rarity in Afghanistan, he shares a house with thirty-five others in the capital's east end. He is particularly optimistic about the children's future. All of them attend school. In spite of all the difficulties that Afghanistan continues to face, Asif Jalali says he is convinced that there are better times ahead for the country. And this time he isn't joking.

Distraction is extremely important in a country where catastrophes are a daily occurrence. There is only one subject that Jalali does not make jokes about: "I am a Muslim. I don't make fun of Islam."

Home
Print
Newsletter
More on this topic
Stand-up Comedy in Dubai: Clean Humour for the Arab WorldInterview with Omid Djalili: Jokes about the Jewish Muslim Love-Hate RelationshipHumour in the West Bank: "I Laugh, Therefore I Am"The Iranian Filmmaker Kamal Tabrizi: Should One Be Allowed to Laugh at Mullahs?Humour in the Islamic World: Digging at the DespotsKaya Yanar: "What you lookin' at?"
Related Topics
Afghan literature, Comedy, Freedom of the press, Islamic lifestyle, Taliban
All Topics

One year on from the Taliban's return to power in Afghanistan, some cracks are opening within their ranks over the crucial question of just how much reform their leaders can ... END_OF_DOCUMENT_TOKEN_TO_BE_REPLACED

"Flugt" is the world's first museum dedicated to the stories of those forced to flee. The new museum, which focuses on the fates of refugees then and now, is housed in a former ... END_OF_DOCUMENT_TOKEN_TO_BE_REPLACED

Foresight is needed to turn the tide of German policy. Being independent of Russia must not lead to dependence on authoritarian regimes in the Middle East. By Kristin Helberg END_OF_DOCUMENT_TOKEN_TO_BE_REPLACED

Rumi's poems, though generally stripped of their Islamic symbolism, are hugely popular around the world. Yet Islamic mysticism is still very much at the heart of these verses. ... END_OF_DOCUMENT_TOKEN_TO_BE_REPLACED

Very different Western reactions to the suffering in Ukraine and the Arab world show that there is a profound rift among cultures. Essay by Michael Young END_OF_DOCUMENT_TOKEN_TO_BE_REPLACED
Author:
Tobias Matern
Date:
Mail:
Send via mail

END_OF_DOCUMENT_TOKEN_TO_BE_REPLACED
Social media
and networks
Subscribe to our
newsletter